Riley finally is one step closer, but teammate Ken Anderson is not. 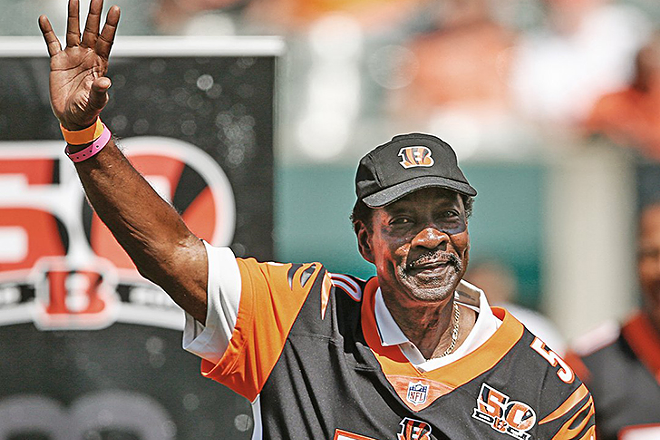 Paw by paw, a Cincinnati Bengal is moving one step closer to having the Pro Football Hall of Fame as his new den.

The Hall of Fame selection committee has selected the late Ken Riley as one of three finalists for the 2023 induction class. If approved, the former cornerback would become just the second Cincinnati Bengal to be enshrined in the hall.

The committee selected Riley on Aug. 16 to move forward for a January vote, along with Chicago Bears linebacker Chuck Howley and New York Jets defensive lineman Joe Klecko. All three are considered seniors whose careers ended during or before the 1996 NFL season. Seniors will need 80% approval from the committee in January to enter the hall.

Cornerback Ken Riley spent his entire career with the Bengals. He’s considered one of the Bengals’ all-time best players, with 65 interceptions — fifth-most in NFL history. Nicknamed “The Rattler,” Riley played 207 games and spent 15 seasons with the Bengals, both in the AFL and the NFL. With Riley, the team went to the playoffs five times and had its first Super Bowl run in 1982. Riley later became head coach and athletic director at Florida A&M, the alma mater where he had been a starting quarterback, had been selected for a Rhodes Scholar Candidacy and later would coach his son, Ken Riley II. Two Beloved Cincinnati Bengals Players Might Finally Make It into the Pro Football Hall of Fame: Can fan-favorite Bengals Ken Riley and Ken Anderson make it to the next round of voting?


As CityBeat previously reported , Riley was excluded from the NFL’s “In Memoriam” segment during the Super Bowl in 2021, just months after he had passed away. The snub incensed fans and increased the calls for his enshrinement in the Pro Football Hall of Fame even more.

When the hall's selection committee called Riley's son to say that his father had finally gotten to the final round, the junior said, "Oh, wow! Really? That is awesome. I told (my father), 'One day, you’re going to do it,'" the press release says. 
Former Bengals quarterback Ken Anderson also was a finalist under consideration to be inducted in 2023 but did not make the cut. Anderson played for the Bengals for his entire 16-season career. Along with Riley, he led the team to its first Super Bowl in 1982 and was crowned the Most Valuable Player and Offensive Player of the Year. He's one of just five players to have earned four passing titles.

Anderson remained connected with the Bengals even after his playing days were over, serving as a quarterback coach and radio broadcaster. His lack of selection to the Hall of Fame thus far is widely considered an egregious snub among sports experts.

Both Riley and Anderson were inducted into the Bengals' own inaugural Ring of Honor class in 2021.

The Bengals' 2022-2023 regular-season kicks off against the Pittsburgh Steelers on Sept. 11 at Paul Brown Stadium. Quarterback Joe Burrow is featured on the cover of Sports Illustrated's NFL season preview issue, on newsstands now.