Yeah, some may involve Cincinnati-style chili. Chrissy Teigen — the multi-hyphenate model, TV personality and sometimes problematic expert user of social media — is heading to the Queen City this weekend, and it's not because she's the wife of locally born-and-raised singer/producer/EGOT winner John Legend.

The bestselling cookbook author and avid foodie will be here as a headliner for the Kroger Wellness Festival.


And, according to Twitter, she wants to know where to eat.

Of course, there's the usual heated debate about Skyline Chili, but if Teigen is looking for some culinary exploration beyond that meaty chain, we have some recommendations — including a weird amount of chili-inspired dishes. And an entire Best Of Cincinnati issue dedicated to the city's top spots, with picks for best overall restaurant, best new restaurant and staff favorites.

One of two Cincinnati restaurants named to Bon Appétit's "50 Best New Restaurants of 2022" list, Mid-City is what the magazine describes as an “intimate and idiosyncratic, not too fancy and not too dive-y" restaurant. Helmed by the team behind Over-the-Rhine bar Longfellow, it's one of downtown’s best spots to grab a classic cocktail (the list includes a perfect ice-cold Gibson) and small plates. The food menu adapts to the seasons and includes vintage-inspired dishes — like Baked Alaska for dessert — plus uncommon proteins. There are fried smelts with cheese powder, chicken hearts on a skewer and the eatery recently added frog legs.  We also freak out about their housemade pickle butter. 40 E. Court St., Downtown, midcitycinti.com. 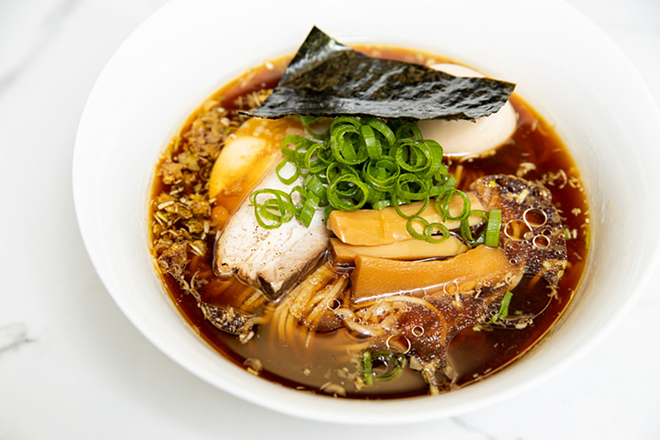 Cafe Mochiko is the other local stop on Bon Appétit's list. The ramen pop-up turned yoshoku-style Asian American restaurant offers everything from coffee and pastries to lunch and dinner. Co-owner and chef Elaine Bentz (née Townsend) was recently named a James Beard Award semi-finalist for "Outstanding Baker" and her ube croissants — or any pastries, really — are a must-have. As are co-owner/chef Erik Bentz's Hokkaido Smashburger and Cincinnati-style Tsukemen. The burger features Ohio’s Sakura Farms wagyu beef on a steamed hokkaido milk bun, made fresh daily. And the tsukemen is a riff on Skyline, with chili-flavored broth, noodles, ground pork, shredded cheddar cheese and onion. Ramen + cheese = good. 1524 Madison Road, East Walnut Hills, cafemochiko.com.

Another weird riff on local chili? Starlight Doughnut Lab's Chili Dip Doughnut. Owner/baker Ben Greiwe was inspired to create the tailgate pastry at the start of football season, modeling flavors off of Skyline chili dip. Greiwe starts with a special 48-hour brioche donut as the base. He then opens the top of it to make a crater, which is filled with shredded cheddar, Skyline chili and cream cheese and topped with more cheddar cheese and diced onion. It's served hot and it's only available on Sundays. 4603 Carter Ave., Norwood, facebook.com/starlightdoughnutlab. 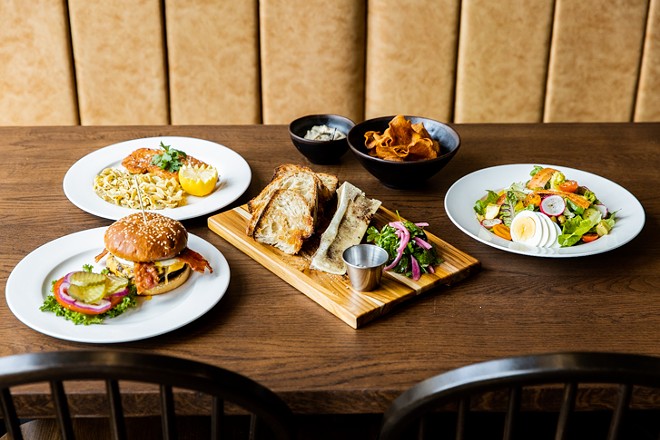 Hailey Bollinger
A spread of dishes available at Goose & Elder

We recommend eating anywhere in Findlay Market, just in general. From the new oyster bar at Sen by Kiki to vegan deli Harmony Plant Fare (get the Italian sub) to the totally not-vegan The Rhined cheese shop (the trillium from Indiana's Tulip Tree Creamery is a must), everything you eat at Findlay is fantastic. CityBeat's dining critic recently paid a visit and gives some other great recommendations, including chef Jean-Robert de Cavel's French Crust Bistro, chef Jose Salazar's Goose & Elder (Salazar also recently opened the bodega-style Daylily Deli in Columbia Tusculum) and even nearby bar Somerset. The otherworldly travel-inspired bar boasts a giant patio — filled with unique seating acquired from across the globe — a glass-encased conservatory bar and tons of delicious boozy and non-alcoholic beverages. Findlay Market, 1801 Race St., Over-the-Rhine, findlaymarket.org.

Named one of the best bars in America by Esquire magazine, Wodka Bar carries an ambitious selection of vodkas, stocking upward of 60 types, as well as several dozen house-infused vodkas with flavors like smoked Earl Grey, beet and horseradish and cherry jalapeño. In addition to booze, however, owner Sarah Dworak — the granddaughter of Ukrainian immigrants and the mastermind behind Babushka Pierogies — serves up an entire Eastern European food menu, with caviar, pickled vegetables, smoked meats, stroganoff and more. Is there Cincinnati-style chili here, too? Of course there is. The Specialty Pierogi is a vegetarian offering featuring meat-free-chili-stuffed pierogi topped with cheddar, sour cream, onions and Frank's RedHot. 1200 Main St., Over-the-Rhine, wodkabarotr.com.

Another local delicacy is goetta — that oat-and-meat mixture — and one favorite way to consume it is on the Anchor's GLT: a double decker with goetta, lettuce and tomato. The New Yorker's food correspondent Helen Rosner named the sandwich one of "The Best Things I've Eaten This Decade,” calling the 24/7 diner itself “alluringly grimy.” Popular for its David Lynch-style interior, animatronic band box and “We may doze, but we never close” sign, the Anchor boasts perhaps some of the freshest goetta in the city — the Glier’s Goetta factory is located across the street. If you aren’t up for a sandwich, they also serve a great cheese and goetta omelet. Note: It’s cash only. 438 Pike St., Covington, searchable on Facebook.

Still hungry? There are more recommendations in the Food & Drink section of CityBeat.com.

The Kroger Wellness Festival runs Sept 23-24 and brings a unique lineup of over 50 panel discussions, food demonstrations and live music to The Banks. The goal of the free event is to "provide a variety of interactive healthy opportunities for the entire family,” Kroger Health president Colleen Lindholz said in a release.

It also gives locals an opportunity to see celebrities discuss various facets of health and wellness, and even work out with them.

Teigen, whose Cravings by Chrissy Teigen brand offers everything from recipes and kitchen supplies to colorful robes, will lead a couple of events on Friday. She's hosting a 30-minute cooking segment, followed by a fireside chat with her mother, Pepper Teigen, a Food Network chef and cookbook author. (Pepper is also leading her own a Thai cooking demo on Friday.)

The rest of the fest roster boasts names like former Real Housewives of New York City star Bethenny Frankel, who will be talking about investing in your health; country star Carrie Underwood, who will be leading a cardio fitness class; Bachelor star Matt James, who appears to be making smoothies; and band Fitz & the Tantrums, which will just be playing music.

Get Kroger Wellness Festival details and a full schedule at kroger.com.