“The story you are about to witness is one of romance and tragedy, primal murder and the urge for revenge."

Photo: Mikki Schaffner
Andrew May’s Hercule Poirot is on the case in Cincinnati Playhouse in the Park's Murder on the Orient Express.

If you’ve been paying attention to the Cincinnati theater scene, you probably know that the Playhouse is not “in the park” this fall while construction wraps up on its new mainstage (the Marx Theatre, its longtime “big” theater, was recently demolished).

As a result, three Cincinnati Playhouse in the Park productions will be presented elsewhere this fall. The first, a theatrical adaptation of Agatha Christie’s Murder on the Orient Express, has opened a three-week run at the Aronoff Center’s 437-seat Jarson-Kaplan Theater.

It’s all aboard for playwright Ken Ludwig’s 2017 clever recreation of the prolific mystery writer’s 1934 novel, which depicts the famous detective Hercule Poirot solving a murder on a luxurious train traveling across eastern Europe. The story was made into films in 1974 and again in 2017, when Kenneth Branagh played Poirot.

Designer Rob Koharchik first designed this production for Indiana Repertory Theatre in early 2020 as a co-production with the Cincinnati Playhouse, which was set to stage it in March 2020. Of course, the worldwide COVID-19 pandemic prevented that.

Two-and-a-half years later, the Orient Express has finally pulled into Cincinnati, with Koharchik’s ornate set redesigned for the somewhat close confines of the Jarson-Kaplan Theater. But how does one stage a story that takes place on a train?

Poirot, the fussy Belgian detective who became a star in Christie’s mystery novels, is heading back from Istanbul after a recently solved case. He’s expecting a relaxing break on a train designed for high-end service and demanding passengers. But within a few hours of the train’s departure, an overnight snowstorm stops progress and a man is murdered, stabbed eight times in his chest. Poirot is recruited to ferret out the perpetrator. Everyone he questions has an alibi, but in his inimitable, often irascible pursuit, he begins to piece together several possible solutions to the crime.

Actor Andrew May brings Poirot to life, right down to his manicured mustache and impeccable attire, which includes a tiny flower in his lapel. The playwright frames the story by immediately bringing Poirot to the front of the stage to address the audience directly:

“The story you are about to witness is one of romance and tragedy, primal murder and the urge for revenge. What better way to spend a pleasant evening together?”

Ludwig’s script provides May with plenty of moments to flash some quick humor, capturing Poirot’s flickers of enthusiasm as he draws closer to a solution, exclaiming “Ooh-la-la, ooh-la-la, ooh-la-la!” May also delivers several moments of exasperation by Poirot when others mistakenly believe they have solved the mystery.

Murder on the Orient Express requires a sizeable cast of suspects with numerous motives — some obvious, some hidden — to murder the reprehensible bully Samuel Ratchett, quickly revealed to be an even worse criminal. As the characters rush to board the train, Poirot observes them, absorbing seemingly random details. Colonel Arbuthnot (Nick Vannoy) is having a secretive romance with Mary Debenham (China Brickey). Helen Hubbard (Jennifer Joplin), a brassy American divorcée who is noisy and overly familiar, cozies up to several of the men. Hector MacQueen (Harry Davis) is Ratchett’s nervous business assistant.

Monsieur Bouc (Taha Mandviwala), Poirot’s friend and a director of the rail line Compagnie Internationale des Wagons-Lits, grants the detective last-minute passage on the train. Russian Princess Dragomiroff (Playhouse veteran Dale Hodges in a caftan and turban) imperiously marches across the stage, followed by the anxious and zealously religious Greta Ohlsson (Lenne Klingaman). And finally, the exotic Countess Andrenyi (Katie Bradley) charms the elegant detective even as he is dubious about her story. Rob Johansen takes on the dual role of a doddering restaurant waiter and the train’s solicitous conductor.

In the show’s first act, Poirot questions each passenger as he attempts to assemble what has happened. More and more evidence is unearthed, but much of it seems random, implausible or simply doesn’t fit with any explanation. Bouc, eager to get to the bottom of things before the train’s reputation is sullied by the crime, keeps leaping to conclusions that Poirot almost instantly deflates. The first act ends with the possibility of another victim, forcing the audience to wait through the intermission to learn what has happened.

In the second act, Poirot begins to piece together various scenarios, much to the consternation of each character. Everyone, it turns out, has secrets to hide, which Poirot will eventually suss out and assemble into several possible explanations. How this all unfolds in time for the finale (just as the train is ready to move again after the snowstorm) is one of those patented Christie solutions. As Poirot reveals the pieces and motives he has put together, director Risa Brainin has each character step forward into pools of light and repeat lines tossed off earlier — but Poirot has threaded them together for the ultimate solution.

If you’ve never seen or read Murder on the Orient Express, you’ll be both surprised and satisfied. And if the tale is familiar to you, you’ll still admire how everything fits together, ticking into place like a fine Swiss watch.

The Playhouse’s talented technical team has assembled a polished, first-class production at the Aronoff Center. In keeping with the professionalism Cincinnati theatergoers have come to expect in Mount Adams, the Playhouse doesn’t miss a beat in this temporary venue.

Cincinnati Playhouse in the Park’s production of Murder on the Orient Express continues at the Aronoff Center’s Jarson-Kaplan Theater through Oct. 23. Info: cincyplay.com. 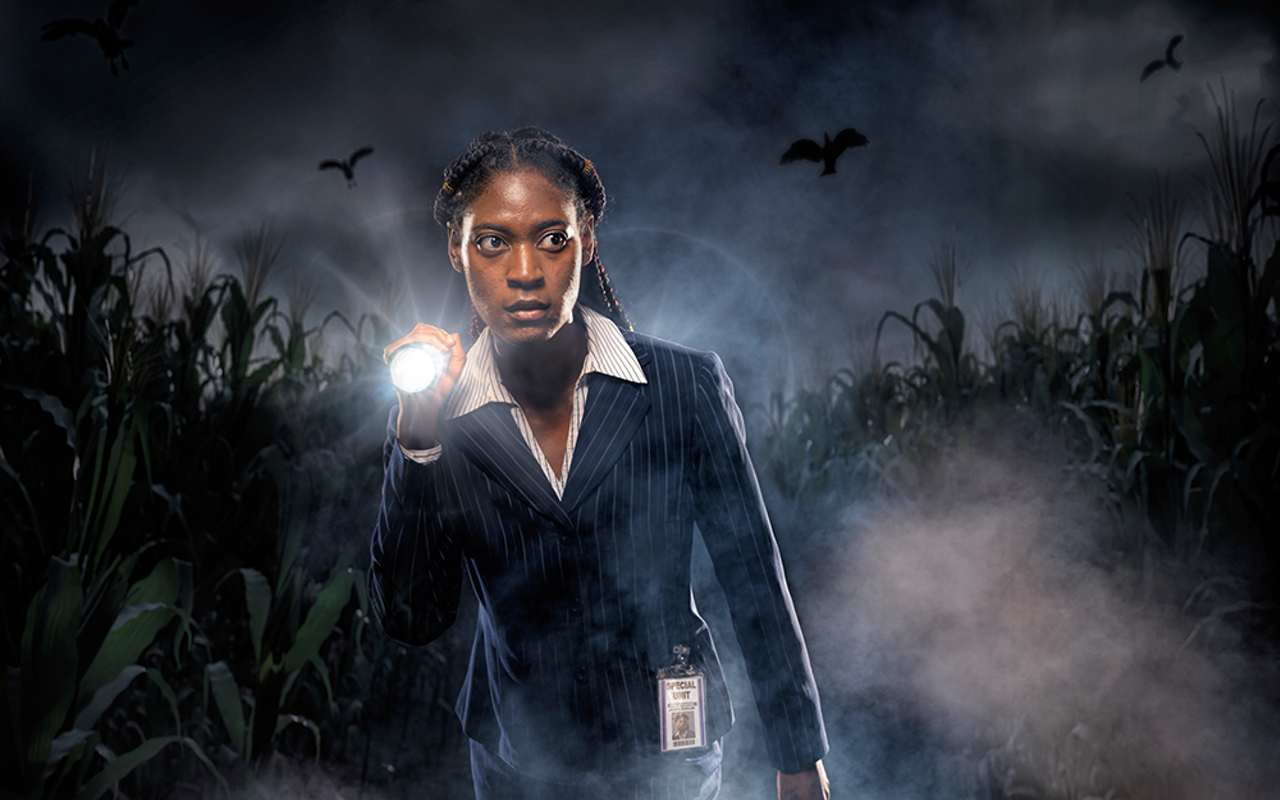 Cincinnati Playhouse in the Park to Host After-Dark Performances in Outdoor Corn Maze This Month: Throughout the month of October, the Playhouse will be hosting outdoor after-dark performances of Children of the Corn Maze: In Search of the Greenville Ghost as part of their "Off the Grid" series.