The penguins in Detroit are foster parents to baby hatched from an egg that was laid in Cincinnati. 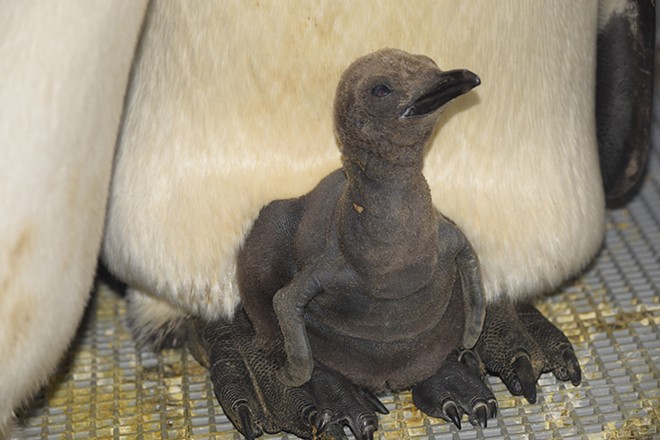 A baby king penguin egg hatched on Aug. 13 at the Detroit Zoo, where it is now being raised by foster parents. But the little family's story has a Cincinnati connection –  the baby's biological parents were none other than Cincinnati Zoo penguins 27-year-old Larry and 8-year-old Stacy.

From the July to September mating season, a pair of Detroit Zoo king penguins — a 21-year-old male and 7-year-old female — bonded but did not produce an egg of their own, a press release from the Cincinnati Zoo states. The Detroit Zoo began brainstorming ways for the penguins to become parents, and the Association of Zoos and Aquariums’ Species Survival Plan suggested Detroit as a possible home for the baby penguin born to Larry and Stacy at the Cincinnati Zoo. Thus, a new collaboration between the zoos began.

“It was a perfect situation,” Jessica Jozwiak, bird supervisor at the Detroit Zoological Society, says in a press release. “We had a pair that was closely bonded but did not produce an egg this year, so we were able to give this egg to them. Everything has worked out wonderfully.”

In preparation for their baby to arrive, the two penguins at the Detroit Zoo were given a practice egg to parent. Now the baby – who does not yet have a name – is safely with its new foster parents in Detroit.

“They are excellent, attentive parents,” Jozwiak says. “We don’t know the sex of the chick just yet, but we are all looking forward to watching it grow up. We are already picking out names we can give the chick once we know the sex.”

“This was a very time-sensitive situation that has resulted in the best-case scenario,” says Jennifer Gainer, curator of birds at the Cincinnati Zoo. “We couldn’t have made this happen without the professionalism and extensive knowledge of both the Detroit and Cincinnati bird teams.”