Research shows that some days are safer than others for pedestrians. 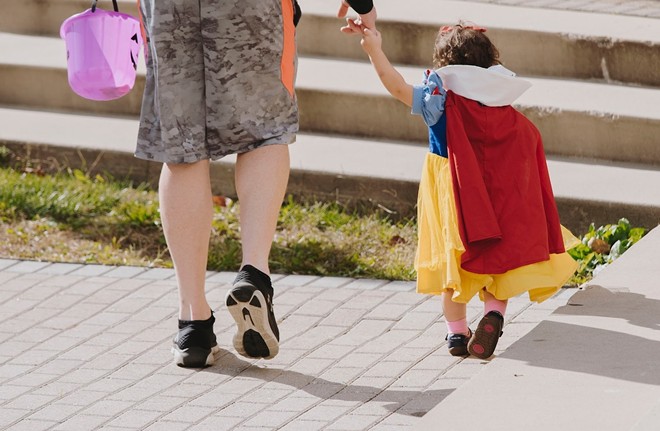 Tiny goblins and ghouls galore went door-to-door in neighborhoods across Cincinnati on Oct. 31, during what could be the city's final trick-or-treat scheduled for a weekday.

Council member Liz Keating introduced the motion during a meeting the week before Halloween. She says the change would only happen if a city-wide survey reflects the “community has a shared interest.”

Cincinnati’s Northside neighborhood takes Halloween seriously, residents tell CityBeat. The neighborhood is known for decking out porches and yards with creepy cobwebs and characters. Some houses plug in smoke machines and flickering lights, others play music like “Thriller” on a loudspeaker.

Northsiders Erin and Alex Nauth were out on Halloween with their two young children, one dressed as a tiger, the other a cowboy. Erin says she likes trick-or-treat falling on the actual Halloween holiday.

“I like it for the reliability,” Erin says. “I lived in the suburbs growing up and I never knew when it was, and now I know it’s just going to be on Halloween.”

Alex says he understands why the weekend might be easier for some parents.

“I totally understand people wanting to do it on the weekends, just for getting everybody ready without work, stuff like that,” he says.

Cincinnati Trick-or-Treat Could Permanently Move to Weekend Evenings: Cincinnati residents will be given a survey to gauge interest in moving trick-or-treat to increase pedestrian safety for kids.


City Council’s motion emphasizes the safety of children during trick-or-treat. The month of October has the highest rate of pedestrian injuries and fatalities among children, according to Safe Kids Worldwide, a nonprofit that works to keep kids safe from injuries. Halloween is the worst day of the year for these crashes.

Jodi Robinson from the Devou Good Foundation – a non-profit that supports active transportation in Greater Cincinnati – says the data on Halloween traffic safety is mixed.

“There is a lot of confusing data and articles on the topic. According to [National Highway Traffic Safety Administration], car crashes nationally are highest when Halloween falls on a Sunday, but pedestrian-related deaths are the lowest on that day,” Robinson tells CityBeat.

Still, the Nauths aren’t so sure moving trick-or-treat to a weekend is going to make things safer for kids.

“I like trick-or-treat being on Halloween for the safety,” Erin says. “Sure, it’s on a Saturday sometimes, obviously, but sometimes it’s on a Monday or Tuesday when it’s less crazy. People are not out partying.”

Cincinnati City Council has not decided which weekend day would permanently serve Halloween in the city. Robinson says safety on weekend days can vary widely.

“City Council's consideration about changing the day of the week for trick-or-treat to a Sunday will likely help with safety, especially compared to Halloween falling on a Friday night, the deadliest of days of the week,” Robinson says.

When asked if he likes trick-or-treat falling on Halloween, the Nauths' cowboy prefers to focus on the future.