Give your family a break from your amateur comedy routine this holiday season. 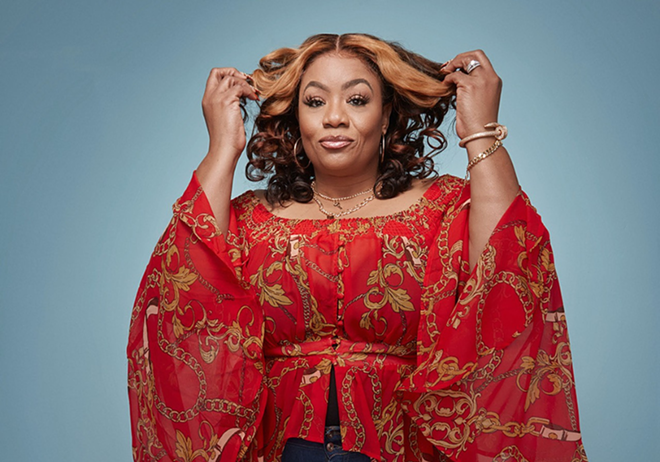 November is the month when we give thanks, and the Queen City can be very thankful that we have two top-level comedy clubs, as well as a number of theaters and other venues that host live comedy. Here are the top five can't-miss comedy gigs in Cincinnati during the month of November.

Kevin Bozeman at Go Bananas Comedy Club
From Chicago comes comedian Kevin Bozeman. He’s been a headliner, and a Go Bananas favorite, for several years. Back in 1999, when Bozeman was six years out from a collegiate basketball career at the University of Wisconsin-Whitewater, he decided to finally pursue a career in comedy — and he hasn't looked back since. "For an hour a night I'm wildly successful," Bozeman has said of his decades-long successful comedy career, according to his biography on Go Bananas Comedy Club's site. Nov. 17-20 ,7:30 and 9:45 (Friday and Saturday). $10-$15. Go Bananas Comedy Club, 8410 Market Place Lane, Montgomery, gobananascomedy.com.

Ms. Pat at Liberty Funny Bone
Ms. Pat loves doing her hit sitcom The Ms. Pat Show (BET+, Paramount+) which has just been renewed for a third season. There are drawbacks though. “It does take me away from stand-up, which I miss a lot, so as soon as we wrap, I’m back out on the road full-time,” she tells CityBeat. “Stand-up is what I own. I can come and do as I please. With The Ms. Pat Show, I have to do what the network tells me to do.” The show does provide a different platform for her comedy, which is better for some stories. “There are so many stories, dark stories from my life that I haven’t even put on stage. Seeing things I’ve been through in life play out on the screen is really fascinating and exciting for me.” Nov. 18-19; 7:30 p.m. and 10 p.m. Friday and 9:30 p.m. Saturday. $32. Liberty Funny Bone, 7518 Bales St., Liberty Township, liberty.funnybone.com.

Josh Sneed at Liberty Funny Bone
It’s become a holiday tradition of sorts as Cincinnati’s own Josh Sneed takes the stage for his annual Thanksgiving week show. When he’s not headlining comedy clubs across the country, he’s featuring for the likes of Ron White and Larry the Cable Guy at theaters and arenas. When he’s not doing either of those things, he’s running his highly successful t-shirt business, Cincy Shirts, with business partner, and former comic, Darin Overholser. Nov. 23, 7 p.m. $23. Liberty Funny Bone, 7518 Bales St., Liberty Township, liberty.funnybone.com.

Lachlan Patterson at Go Bananas Comedy Club
There was a time when comedian Lachlan Patterson would think nothing of driving his 1986 VW Westfalia clear across the country to get to a gig. No more. A top headliner, the Vancouver, British Columbia, native lives in Los Angeles, where he has thrived as a comic. “My dad, when I was a kid, always put me in class with the older kids, and on teams with older kids because he wanted me to play against better people than me so I’d improve faster," Patterson tells CityBeat. "That’s why it was great for me to come to Los Angeles and see all this great comedy. I thought, 'Okay, that’s how good I want to be.’ And it inspired me to work harder and push myself to work harder and push myself to improve.” Nov. 25-26, 7:30 p.m. and 9:45 p.m. $15. Go Bananas Comedy Club, 8410 Market Place Lane, Montgomery, gobananascomedy.com.

Greg Warren at Liberty Funny Bone
It’s the return of Cincinnati’s adopted favorite son, St. Louis native Greg Warren. Though he started doing comedy in Houston, it wasn’t until he came to Cincinnati that he took it seriously. Eventually he left his day job at P&G and is now a successful headliner. Comedy fans may also know him from The Bob & Tom Show. Cincinnati is also fortunate to get a matinee offering of his all ages show. It’s one of only a few markets in which he does this show. “My act is pretty clean anyway, and it’s not a kiddie show,” he tells CityBeat of the all-ages set. “We pull kids up on stage and interview them, let them tell jokes. It’s pretty cool.” Nov. 25-26; 7:30 p.m. and 9:45 p.m., Friday, 4 p.m. Saturday (family show) and 7 p.m. and 9:15 p.m. Saturday. $20. Liberty Funny Bone, 7518 Bales St., Liberty Township, liberty.funnybone.com.