Look what she made you do. 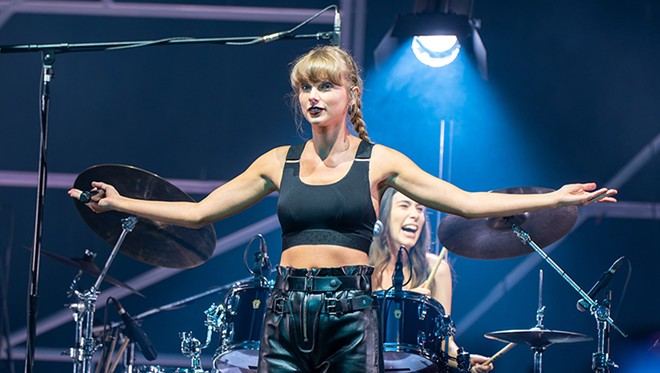 The ticket-buying experience for Taylor Swift’s “The Eras” tour has been nothing short of a total shit show.


Swift announced an additional 17 shows to "The Eras" tour on Friday, Nov. 11— including a second stop in Cincinnati. She'll now be performing at Paycor Stadium both Friday, June 30 and Saturday, July 1 with supporting acts MUNA and Gracie Abrams.

Those who were selected for the pre-sale lottery on the evening of Nov. 14 could log on using their unique “verified” code starting Nov. 15 to buy tickets at 10 a.m. local venue time. With two “Eras” shows scheduled for Cincinnati, local fans were off to the races at the start of pre-sale, but then the anxious tweets started rolling in.

Not a Cincinnati resident but a Louisville resident. Stressed pic.twitter.com/BzKho2E836

I’m in the queue and have been since 10am. Still 2000+ ahead of me. Feeling anxious. My boss got her tix and is done! pic.twitter.com/TX1Us4VFEE

In the queue since 10 am. Anxiety is through the roof! How have I been in line for an hour and there's still 2000+ in front of me? pic.twitter.com/QgnUKDfUs0

in front of the computer since 9:30 [email protected] nothing! Got in to select the tickets,
kicked me out. Now back in again but when I entered my code to finally unlock seats, the code has been pending for 3 hours

Awful. I logged on an hour early. The line has said 2,000+ in front of you since the room opened and it hasn’t budged.


“I logged on an hour early. The line has said 2,000+ in front of you since the room opened and it hasn’t budged,” tweeted Bradley Harris.

Harris, who lives in East Walnut Hills, said he was able to join a virtual “waiting room” starting at 9:30 a.m. As of 2:30 p.m. he was still stuck in the queue with "2,000+" fans ahead. Harris started poking around to see just how many people accounted for that ominous “+” on Ticketmaster’s site.

“Looking at the code, it says there’s 8.6k in front, but that’s not front-facing,” Harris told CityBeat.

Harris used Google Chrome’s “Inspect Element” tool to see the code for the Ticketmaster webpage, which he said showed 12,000 people ahead of him in line at the wait’s peak. Once he got to the page to buy tickets, Harris said the pickings were slim.

“The only ones available for me were 300 level and they were $109 each plus tax. Looks like all the lower levels were gone,” Harris said.

With so many fans still in the queue as of press time, it's hard to say how much tickets will cost in the varying sections of the 65,500-seat stadium. Some online reports cite tickets for the Cincinnati shows costing as much as $1,700.

I haven’t missed a TSwift concert since her first headliner in 2009, but at $1,700/ticket for nosebleeds I’m gonna have to sit this one out 😳 pic.twitter.com/Ck89B6rVUx


Annette Alanis of East Price Hill’s Incline District hasn’t had a chance to come across prices. As of press time, Alanis is stuck in a reload loop on the page where she can pick her seat at Paycor Stadium.

“I don’t care at all where I sit as long as I can be there,” Alanis told CityBeat.

After waiting for hours in the queue with 2,000-plus fans ahead of her, Alanis was prompted by Ticketmaster to pick her seats, only to be told they’d been snagged by another fan and asked to make a new selection.

She said the screen keeps showing her sold-out seats.

“I’ll just keep trying for a while and then if nothing else, hope for the best at the Capital One Presale,” Alanis said.

The Capital One Presale, designed to be a perk for card members, was originally scheduled for Nov. 15 at 2 p.m. But at 1 p.m., Ticketmaster addressed the internet’s collective heart attack in a tweet saying the demand for Taylor Swift tickets was “historically unprecedented,” and announced the Capital One presale would be rescheduled to Nov. 16 at 2 p.m.

The rescheduled Capital One Presale might be good news for those who had added hurdles while trying to secure Tay-Tay tickets, like the nail technicians at Spruce Nail Shop who couldn't monitor their progress in line.

“Is anyone here in the queue for Taylor Swift Tickets?” CityBeat asked the packed nail salon in Over-the-Rhine.

Multiple panicked heads popped up from the hands and feet of clients in a unified, “Yes!”

“If you go in our break room there are multiple laptops open and waiting in the queue,” Sonne Beard told CityBeat while giving a customer a pedicure.

Parcor Stadium officials, Taylor Swift and Ticketmaster were all unreachable by press time.