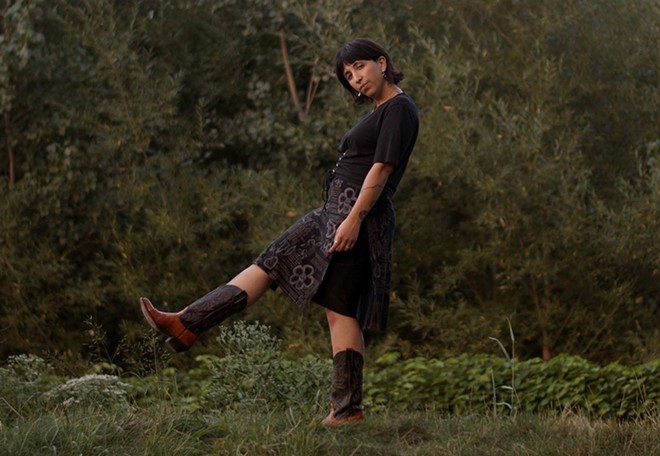 Shoman’s Chicago-based bedroom-folk project started in 2018 and quickly evolved into Tenci. Now a band of four with their sophomore album A Swollen River, A Well Overflowing fresh off the press, Shoman continues to draw inspiration from their past.

“Throughout all my music, I feel like I really try to just treat it as this, like, archival process,” Shoman says. “With the second [album], it’s more so like thinking towards the future, but there are still some songs where I’m kind of dipping back into the pool of my memories.”

CityBeat spoke to Shoman just ten days after Tenci had released their single Sour Cherries ahead of the LP. The single features three songs from A Swollen River, A Well Overflowing, all of which showcase Shoman’s sweet and expressive voice on a landscape of crisp, simple instrumentation. Fans of Big Thief, Angel Olsen and the like will fall instantly in love.

“I feel just excited to be releasing music,” Shoman says. “I feel like the anxiety and excitement has just kind of morphed more into excitement.”

The soft and intentional production of these folk-adjacent songs makes them a fitting soundtrack for a pensive country drive or a night in cooking dinner with friends — or for some magic tricks in the park, as is the subject of the music video for “Vanishing Coin,” one of two music videos for the Sour Cherries single. Shoman says they made four videos for their debut album.

“It’s really fun for me to try to tell a story in that form,” says Shoman, whose friends often are their collaborators in this context. “Sometimes my friends will just be like, ‘Well do you wanna just do this one for free?’ I feel lucky because that’s not always the case, and they are very expensive to make.”

Shoman turns to friends and collaborators for more than just their videos. The first Tenci album, My Heart Is an Open Field (2020), evolved as it did because Spencer Radcliffe and Tina Scarpello joined the project, and together they all recorded at Radcliffe’s home. Shoman says that for A Swollen River, A Well Overflowing, their bandmates provided helpful feedback in the recording process.

“[Having them] record with me was really helpful because they could kind of, like, be my second pair of eyes and ears on things,” Shoman says.

The writing and recording process for My Heart Is an Open Field happened very quickly, they say, which added to the rawness of the songs. But for their second album, Shoman says they appreciated the opportunity to take more time.

Playing and experimenting with the creative process was still central in their first album. But with less of a pressing deadline for the latest release, Shoman says they felt less rushed.

“That’s always a good feeling, just to feel like you have more time to do something that is really important to you,” Shoman says.

And it’s clear that these songs are extremely important to Shoman, who not only pours their life experiences into their lyrics but adds personal relics from their past into each record. In the middle of My Heart Is an Open Field, the track “Blue Spring” contains a voice recording from Shoman’s grandmother Hortencia. Known by her friends as Tenci, Hortencia is the eponym of Shoman’s project, they say.

“For my birthday, she gifted me digitized versions of home videos,” Shoman says. “I’ve been, like, begging her to show me them.”

“I just feel like my memory is kind of bad or blurry when it comes to being a kid or growing up and stuff,” they say. “I feel like I really wanted to dive into that a little more.”

Tenci released their first album on a friend’s small label in 2019. Texas label Keeled Scales approached them to do a re-release in June 2020, when touring to share and support new music was not an option due to the COVID-19 pandemic. As the world has gradually opened back up, Shoman and their band have been able to play their songs for live crowds — and they’ve managed to stay healthy along the way.

“We’ve been pretty diligent about mask wearing, and we’ve made it through all the tours without getting COVID, which is, like, unheard of,” Shoman says.

The band is on its sixth tour since venues re-opened and already has three tours planned for 2023. Although the band works with a booking agent, Shoman likes to select all of the locals, spending time digging around venue Instagram pages looking for local bands that seem to fit Tenci’s music and values.

“I’ve discovered a lot of cool music,” Shoman says. “I feel like it’s a fun way for us to kind of get more of an in-depth look into the actual community where we’re playing.”