Only one Amazon warehouse in the country is fully unionized. KCVG could become the first Air Hub to achieve the same. 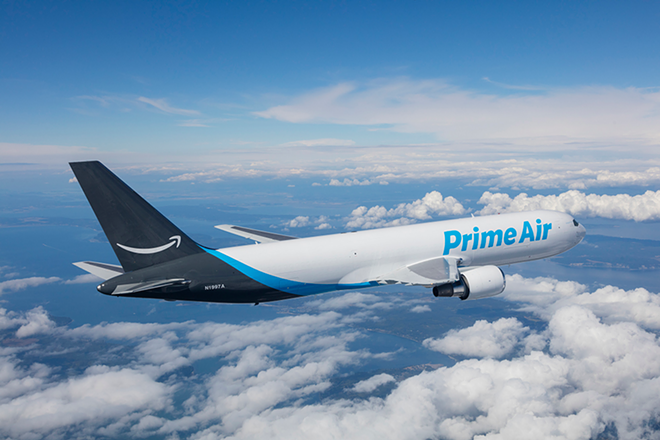 Efforts to unionize Amazon's largest Air Hub facility in the nation are taking off in Hebron, Kentucky, and the company has responded with warning signs to employees.

The massive $1.5 billion dollar Amazon Air Hub located just outside of Cincinnati/Northern Kentucky International Airport (the Air Hub is often referred to as KCVG) first opened in August of 2021. Jeff Bezos himself was in attendance to commemorate the opening of the mega-corporation's biggest airborne shipping operation, along with politicians like U.S. Rep. Thomas Massie of Kentucky District 4, who lauded the Air Hub as a massive local job-maker.

The Air Hub at KCVG employs about 4,500 workers moving “millions” of packages each week, according to press materials on Amazon’s website.

One of those workers is Jordan Martin, a ramp associate at the Air Hub. He says his job is to move loads of Amazon packages on and off the planes, but the brief description doesn’t begin to cover the danger associated with the job.

“It’s one of those environments where, if you don’t have your head on a swivel … you very well could lose your life,” Martin tells CityBeat.

Martin is part of the small but organized group of Amazon Air Hub workers at KCVG looking to unionize its not-so-small village of employees. He says KCVG is the first Air Hub to make its unionization efforts public. He's proud of the work he and his coworkers do, especially when weather conditions are harsh, but says that his job is too dangerous to not receive hazard pay.

“If someone accidentally walked too close to the [airplane] engine, you’re going to get sucked up into it,” Martin says. “Or on the off-chance a plane is coming in and someone missed a rock or a piece of metal that was on the taxiway and it got sucked into the jet engine, that will get spat out at a couple hundred miles per hour.”

Last year, Martin says employees received about $2 extra per hour, or “peak pay.” This incentive is for working the longer, more strenuous shifts fulfilling a significantly higher volume of packages to meet the holiday rush. He says there’s usually a time-off freeze during the holidays, and employees can usually expect to work six to seven days per week. In September of this year, employees started hearing rumblings of a holiday ahead with no “peak pay.” Employees tried voicing their concerns about the “peak pay” rumors with a petition of about 400 signatures in favor of the holiday incentive, but Martin says management shot it down.

“That was the catalyst,” Martin says.

On Nov. 10, employees at KCVG’s Amazon Air Hub announced their intention to unionize in a press release, demanding a $30 hourly wage for all employees, 180 hours of paid time off and more. They're the first Air Hub to publicly organize a union, according to Martin. Only one Amazon warehouse in the country is openly unionized. So far, the KCVG union is entirely local without a union representative. Martin says they have more than 50 organizing employees so far, and he says that number is growing.

Mary Kate Paradis, a public relations manager for Amazon, responded to CityBeat’s request for comment on the start of union efforts at the KCVG Air Hub facility, saying, “Our employees have the choice of whether or not to join a union. They always have. As a company, we don’t think unions are the best answer for our employees. Our focus remains on working directly with our team to continue making Amazon a great place to work.”

Currently, full-time employees of the Air Hub make up to $19.50 per hour, according to Amazon’s online press center. The burgeoning union’s first press release says the company offered employees an “insulting” cost-of-living raise of 40 cents per-hour, which “[amounts] to a pay cut given the ongoing impact of inflation.”

“Our most popular demand is for a $30 per hour starting wage,” reads the release from the workers. “Inflation has sent prices of basic necessities like gas, groceries, and rent through the roof. Winning $30/hr at Amazon KCVG would allow us to afford a better standard of living, and raise the expectations for all workers to fight for more.”

Amazon responded to CityBeat’s request for comment on the demand for a $30-per-hour wage, saying, “Amazon jobs for front-line employees in customer fulfillment and transportation come with an average pay of more than $19 per hour, with employees earning between $16 and $26 per hour depending on their position and location in the U.S.,” Paradis says.

Workers are calling for 180 hours of paid time off, without a cap on accrued time, according to the union’s announcement.

Amazon tells CityBeat that employees have the option to take up to 20 weeks paid leave, but 14 of those weeks are for pregnancy-related disability.

Martin disputes this, saying first year associates only get 40 hours of paid time off for the calendar year, with incremental increases the more years spent with the company.

According to Amazon.jobs.com, employees would need to work at the company for six years or more to receive 120 hours of annual paid vacation time, or 15 days.  The website also says employees get seven paid holidays, and that sick time varies by state.

“Yesterday, Amazon sent out a facility-wide text warning workers that they 'have no obligation' to speak to anyone, ‘including a union organizer.’ They also warned that if Amazon workers shared their contact information with their coworkers about starting a union, they may be contacted,” the union said in a Nov. 15 press release.

Martin says signs started popping up around KCVG warning employees of “third parties” trying to get their “personal information,” which he says gives employees a false impression of what a union does. 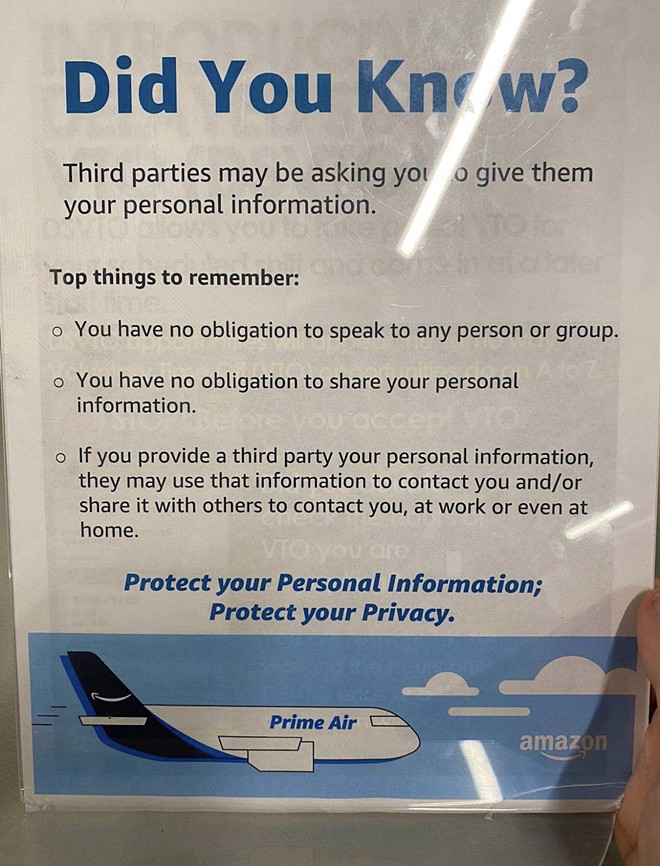 “They kept using the terminology, ‘beware of third party,’ and again, we’re not some random third party, we’re their coworkers. They are not giving all the facts with that,” Martin says.

The “personal information” Martin says organizers collect, like phone numbers, are used to inform employees of meeting times and locations outside of business hours.

Amazon responded to CityBeat’s request for comment on the posters, saying, “We share this information because we believe it’s important that everyone understands the facts about joining a union.”

On Nov. 17, Amazon announced a round of layoffs with numbers in the thousands. Days before, Bezos announced he would give away most of his $124 billion fortune to charity, bestowing Dolly Parton with $100 million to give away on his behalf.

“For Bezos to say he’s going to donate to Dolly Parton – no shade to Dolly at all – but it’s like, ok, 10,000 employees are getting laid off at Amazon, where’s their help? You’re donating to nonprofits, which is a noble cause, but people are being directly affected by your failed business ventures.”

Workers will continue unionizing efforts through the holiday season, holding meetings and collecting signatures, Martin says. In the meantime, he’s trying to not let what he calls “union-busting” slow their momentum.

“We are Amazon,” Martin says. “We are the lifeblood of the company. It’s not corporate, it’s not upper management, they’re not the ones getting into the belly of a plane loading boxes in single-digit weather, we are.”