As Landsman prepares for his new job in Washington, D.C., Cincy residents can apply for his council seat through Nov. 27. 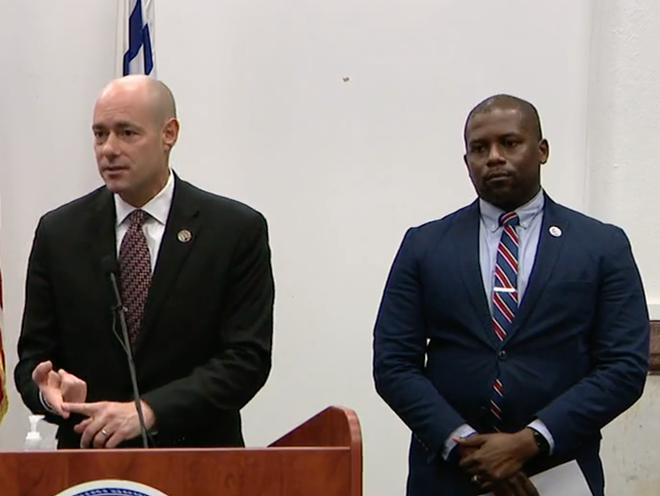 There soon will be a new face at City Hall.

With Cincinnati City Council member Greg Landsman preparing to head to the U.S. House of Representatives in January, the city is making plans to appoint his local successor. Landsman announced Nov. 22 he has designated council member Reggie Harris to appoint the person who will take Landsman’s spot through the end of 2023.

“This is not going to be a popularity contest. The appointment process is a process of continuity. It’s about thinking about what we’ve established over this year and what we’ll do going into the next year,” Harris said. “And it’s also about choosing someone who has the ability to articulate a clear plan for advancing this council’s priorities: core services, public safety, housing, equity, pedestrian safety and sustainability.”

There are a variety of protocols, but generally, Cincinnati’s municipal code says that a designee on Cincinnati City Council must appoint a successor within 60 days of a council vacancy. If the vacancy is not filled, the mayor may appoint someone to the post. The chosen successor would serve as a council member until the end of the predecessor’s original term, when they can choose to run for election to retain their seat.

On Nov. 8, Landsman defeated incumbent Steve Chabot in a general election and will represent the 1st Congressional District in the U.S. House of Representatives in January.

Any Cincinnati citizen can apply to be appointed to Landsman’s soon-to-be-vacant position. Candidates must complete the application found on Harris’ page on the city’s website; applications must be submitted by 11:59 p.m. Nov. 27.

Harris said the application requires a résumé and cover letter – ”pretty standard,” he said. He also noted that applicants will answer questions that showcase their values and priorities.

“I think we were really conscientious and deliberate in the questions that we’re asking, and that will give us a real good sense of who this person is and how they’re going to view their role and filling Councilman Landsman’s seat,” Harris said.

Harris said that during the Nov. 29 public safety and governance committee meeting led by Scotty Johnson, he’ll present summaries of the applicants and will solicit feedback from council members. From there, Harris will create a public shortlist of candidates for interviews and then will announce the appointment during the week of Dec. 5.

Landsman said that Harris and the council will discuss the qualities they want in a new “teammate.”

“That’s a good word because that’s what’s so important to get things done,” Landsman said. “It will be done in a way where I think you’ll have real, real engagement across the board, from colleagues on council, the mayor, the public. So hopefully this does represent a big change in how it’s been done in the past.

Because Harris is Landsman’s designee to appoint the next council member, the council will not need to vote on the replacement as members did in previous situations. Harris said that though the decision ultimately rests with him, he plans to consult all council members about candidates throughout the process.

“It’s a condensed process [and] has lots of touchpoints for both community and council engagement,” Harris said. “It’s definitely a collaborative process, but as the situation is set up [as a designee], I ultimately do have to make a choice.”

Harris acknowledged that the application timeline and process is short – particularly during a holiday week – but he says that those interested in the position likely will plow through.

“It is a tight timeline, but I think it is a really important kind of first test. The city doesn’t stop running on the holidays. We often in this role have to pull together really important and significant work in short timelines in spaces that aren’t always opportune,” Harris said. “So I think that this actually is a great opportunity to identify folks who are really passionate about this and really want this.”

Harris said he’s casting a “broad net” to spread the word about the council vacancy and encourage applications, including through outreach to organizations like the Urban League of Greater Southwestern Ohio, the Greater Cincinnati Chamber of Commerce and college fraternity and sorority networks.

He added that Landsman has not offered any input about specific individuals he’d like to see in his seat.

“He has been adamant about a clear and transparent process, and every conversation we’ve had about this appointment process has been about that,” Harris said. “I even asked him, ‘Hey, do you have some folks in mind, some ideas?’ and he said, ‘I am clear and committed to the process.’”

Landsman said that because he will be sworn in as a congressman on Jan. 3, he plans to formally resign his Cincinnati City Council position on Jan. 2. His successor then would take the city’s oath of office that morning.

Community members who aren’t seeking the office can take a short survey about what qualities and plans they’d like to see from the next Cincinnati City Council member.