Pendleton artist collective and gallery Bunk Spot has a new home in Northside. And the space at 4148/4150 Hamilton Ave. is currently being shared by (DSGN)Cllctv, an arts consulting business formed in 2019 by Julia Green and Michael Gonsalves. Bunk Spot is dividing its portion of the building between a showroom, a fabrication shop and an area to display merch. (DSGN)Cllctv’s offices and framing facility will temporarily be housed here, too, though Gonsalves notes that they plan to move their operation elsewhere, with sights set on Camp Washington. Green and Gonsalves are partners both in life and business. They met while students at the University of Cincinnati and, more specifically, through a mutual connection with Bunk Spot curator Ben Brown. The goal of (DSGN)Cllctv is to create jobs and opportunities for emerging artists, commercially, so that they can gain exposure and make a living wage. As more artists joined their roster, they decided they wanted to include a gallery in their space. Happenstance would have it that Brown was looking to move Bunk Spot, formerly at 544 E. 12th St. in Pendleton. Bunk Spot — also known as Bunk News — has a strong DIY bent and has been behind a slew of local art and music shows since its formation in 2005. Described as a “place where scenes and genres disappear,” their partnership with (DSGN)Cllctv will also enable the gallery to operate under regular hours (as opposed to one-off/by-appointment shows). Their first project rolled out at the end of August: a livestream with local Electronic music outfit #Freshlist and aerial performances by Elevated Aerials. The prospect of having people physically in the space is up in the air due to COVID-19, but they want to host their first art opening in September. A Halloween installation is also in talks. Instead of their usual Final Fridays, Bunk is shooting for openings to be held on the last Saturday of every month. When they do start rolling out shows, safety, Brown says, is paramount. In the meantime, the building’s exterior has been opened up to mural artists. One of local artist Jill Cleary’s psychedelic “Jibe” murals, seemingly an homage to the noodly cartoons of the 1920s and ‘30s, serves as the space’s main showpiece. Stroll around the property and you’ll also find a batty work by Vladimir Plitsyn; Hitchcockian street art by Technique 2012; a blue gradient piece by Tenzing, his last artistic excursion before heading off to college; and a blazing mural by Empire Citizens; among others. “(The building is) kind of like a public gallery, if you will, and the alley that runs alongside of it — that’s always there and will continue to grow,” Brown says. Green notes that “by a stroke of luck” the building was tagged with three pieces by the late tattoo and street artist Jason Brunson. “You’re never going to want to do anything to that,” Green says. “So that gave us the idea to just cover the whole (building) in art.” The new Bunk Spot and (DSGN)Cllctv building is located at 4148 Hamilton Ave., Northside. Keep up with openings and announcements on Instagram @dsgn_cllctv and @bunk_news.
Photos by Hailey Bollinger
Scroll down to view images 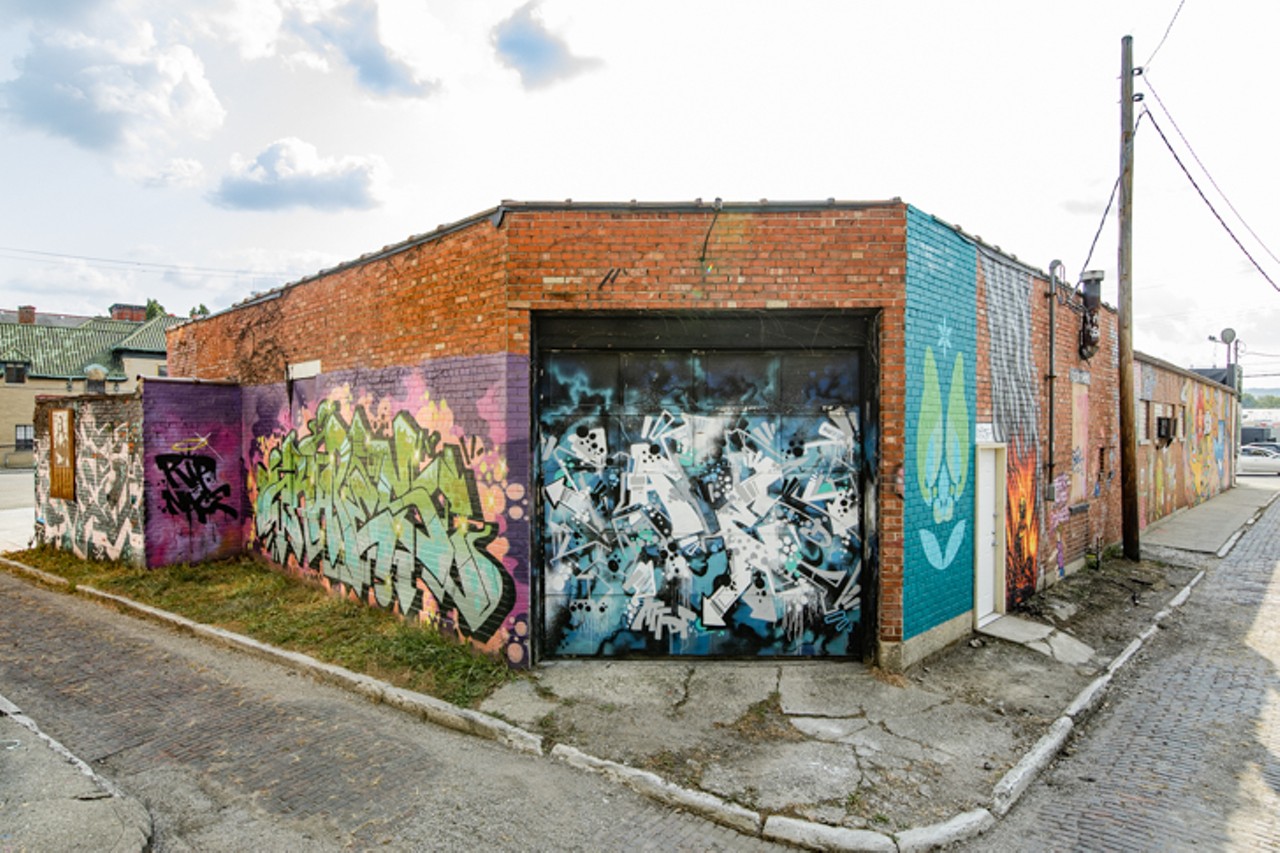