A new 80-foot long mural has been unveiled in Lincoln Heights. Titled “Black Excellence in Zone 15,” the artwork — located at Serenity Park at 1201 Steffen Ave. — aims to celebrate the rich history and famous residents of this neighborhood, "the first primarily Black self-governing community north of the Mason-Dixon line." A project of The Heights Movement — a local group co-founded by Daronce Daniels with the goal of engaging, uplifting and empowering the "residents of Lincoln Heights and people of color in Hamilton County by giving them the tools of workforce development and land ownership" — artist Daryl Myntia Daniels designed the work and painted it with assistance from youth apprentices hired via a partnership with ArtWorks and ArtsWave. The title of the mural, "Zone 15," comes from an area nickname based on the Zip Code, 45215, says Brandi Colvin, who does PR for The Heights Movement. "The mural is a historical timeline highlighting the great people who have come from Lincoln Heights," Colvin says. The mural includes representations of: the village's first mayor, Michael J. Mangham; Olympians Mae Faggs Starr and William DeHart Hubbard (the first Black person to win a gold medal in an individual event for the running long jump at the 1924 Paris Olympics); sports stars Tony Yates, Greg Stimerick and Darryl Hardy; musicians The Isley Brothers and Gospel singer Charles Fold; poet Nikki Giovanni; political leaders including Carl Westmoreland, Samuel Glover II, Paul Blackwell and Yvette Simpson; and Dolores Lindsay, founder of the Lincoln Heights Health Center. The Heights Movement — in addition to its work focusing on academic excellence, economic justice and public health in the neighborhood — is currently in the process of creating a 45-minute documentary about the "history and remaking" of the Lincoln Heights, with Easley Blessed Media and the University of Cincinnati, says Colvin. A brief history of the neighborhood is included on the The Heights Movement website: Lincoln Heights, Ohio is a community roughly 13 miles north of Cincinnati’s city center with a population of approximately 3,300. A historic and proud community nearing its 75th year of incorporation (1946), Lincoln Heights was the first majority African-American, self-governing municipality north of the Mason-Dixon line. A victim of systemic dismantling of its land ownership by Hamilton County, Lincoln Heights is roughly 10% of its original size, which included parts of all surrounding communities including Glendale, Lockland, Reading, Woodlawn, Wyoming and Evendale (particularly where the General Electric plant resides) removing its industrial tax base.

Despite the economic isolation, Lincoln Heights was the largest majority African-American community in America, which housed two grocery stores, a pharmacy, fire and police departments, two skating rinks, movie theater, nightlife venues, its own high school, and dozens of other businesses for its over 6,000 residents in the 1970s. Over the next 30 years the population dropped to current levels and was hit hard by the loss of manufacturing jobs and tax revenue. Since 2003, the year the YMCA closed in Lincoln Heights, independent fire and police services have been outsourced, and the lack of tax-base, high poverty levels due to unemployment and underemployment, and high violence rates have been crippling to the community’s economic vitality.

According to a 2019 report from the Urban Land Institute, Hamilton County and the Village of Lincoln Heights, "Today, Lincoln Heights has an earnings tax revenue of $166 per capita per year, the second lowest in the county. The Village of Lincoln Heights is also currently struggling in population and job growth and home values." The Heights Movement is aiming to change that by returning "Lincoln Heights to past glory through sustainable projects that positively impact our residents educationally, financially, professionally, and physiologically," reads their website. This mural honoring the village's achievements and providing visibility of its success is just an additional way to meet those goals. The Heights Movement has also partnered with President Barack Obama's initiative My Brother's Keeper and is looking for a solution to relocate the Cincinnati Police Department’s gun range in the neighborhood. If you'd like to learn more about The Heights Movement or volunteer, visit theheightsmovement.com/getinvolve
Photos by Grace Lawler
Scroll down to view images 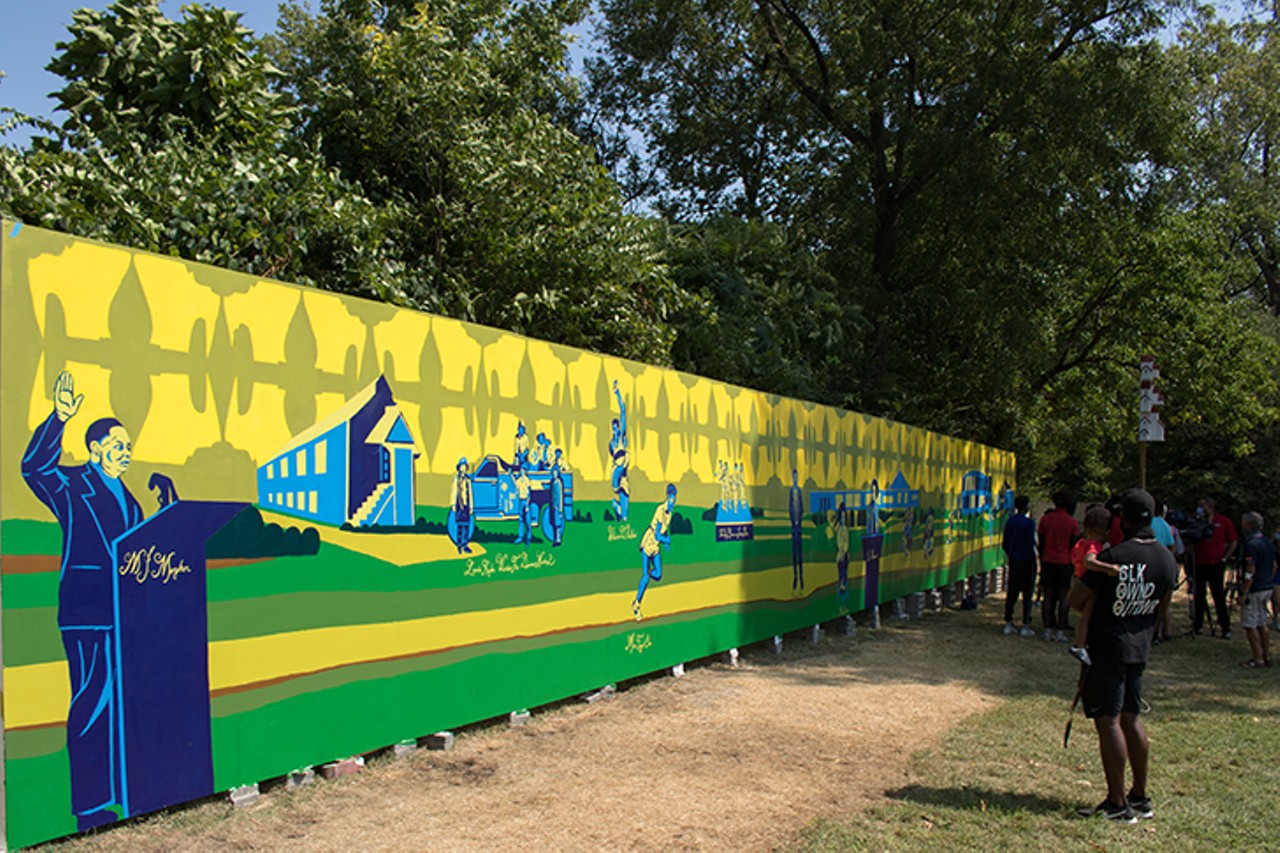 Grace Lawler
A project of The Heights Movement, “Black Excellence in Zone 15" — located at Serenity Park at 1201 Steffen Ave. — is a timeline of the village with renderings of famous residents including The Isley Brothers, Nikki Giovanni and William DeHart Hubbard. 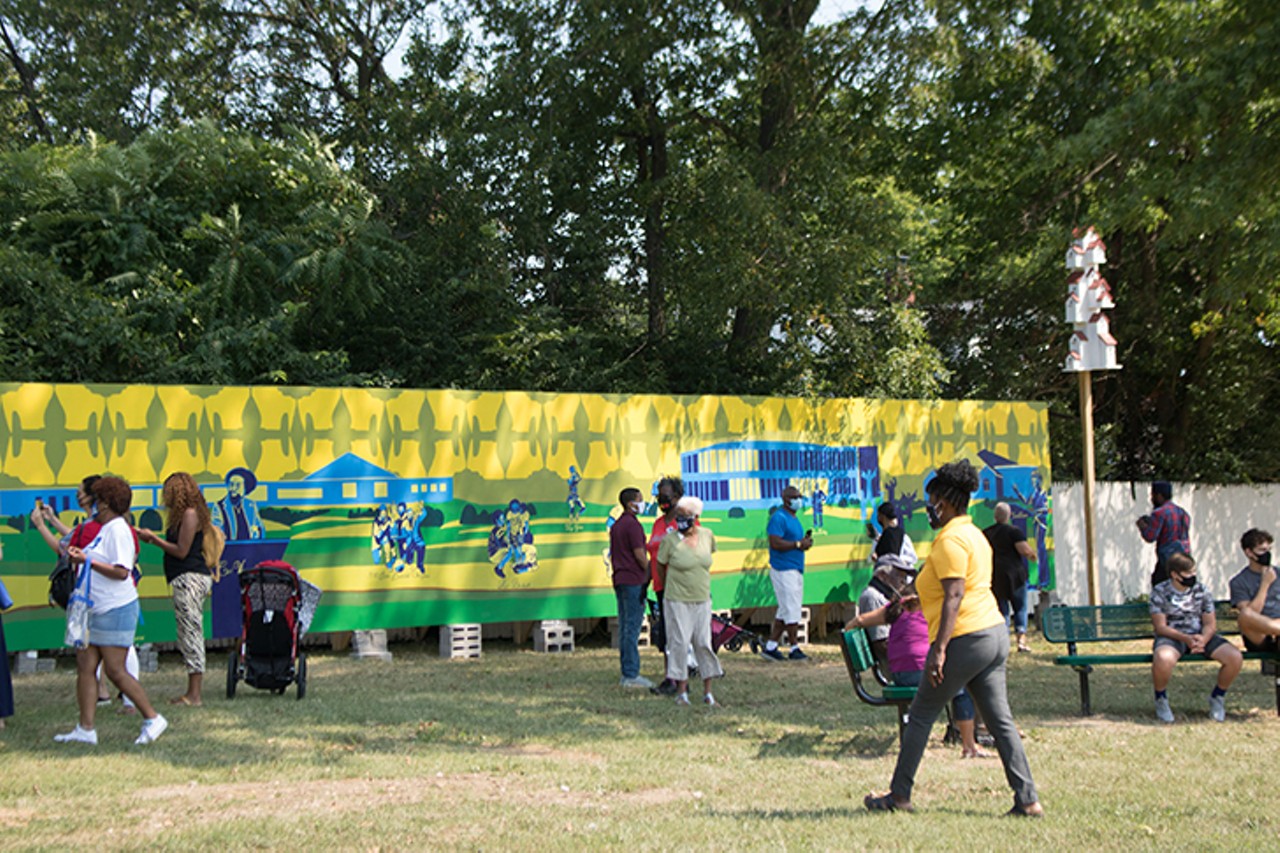 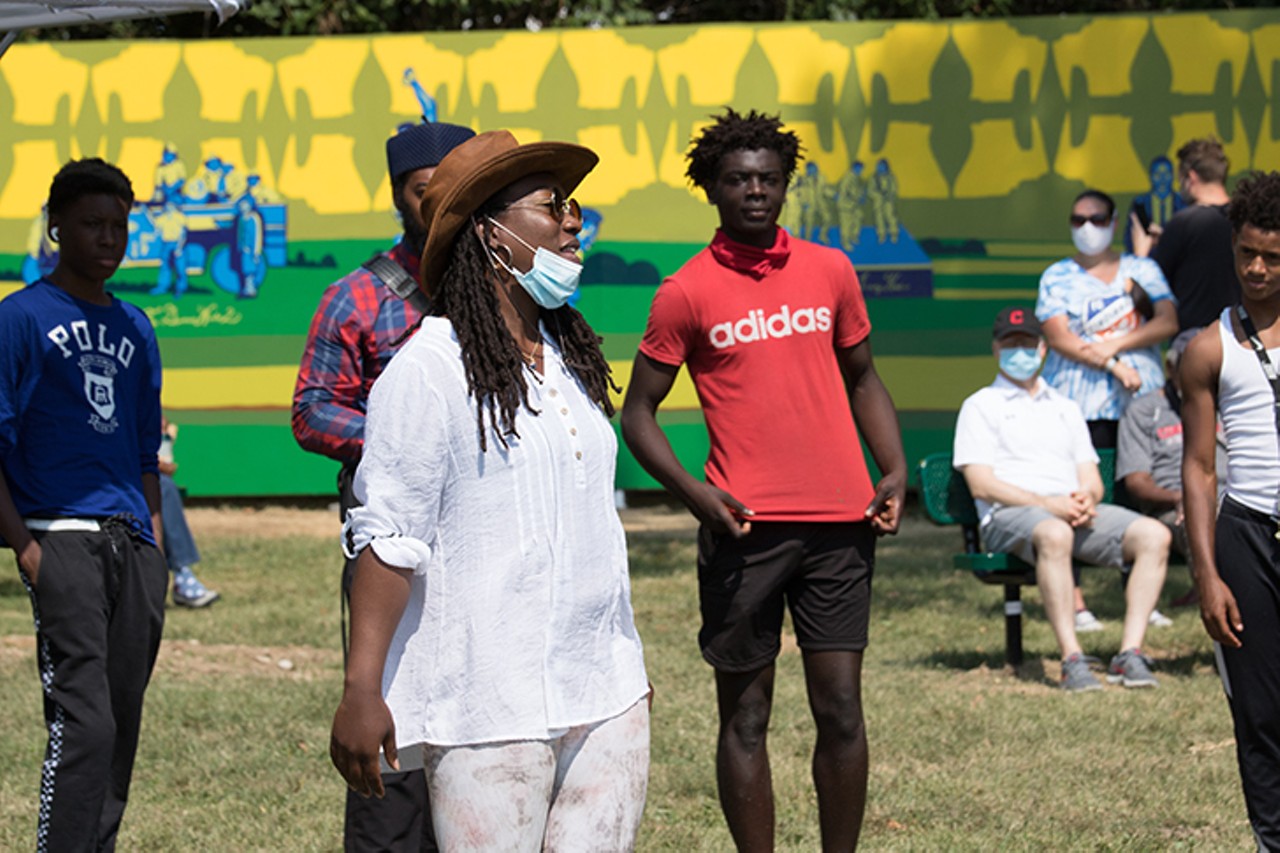 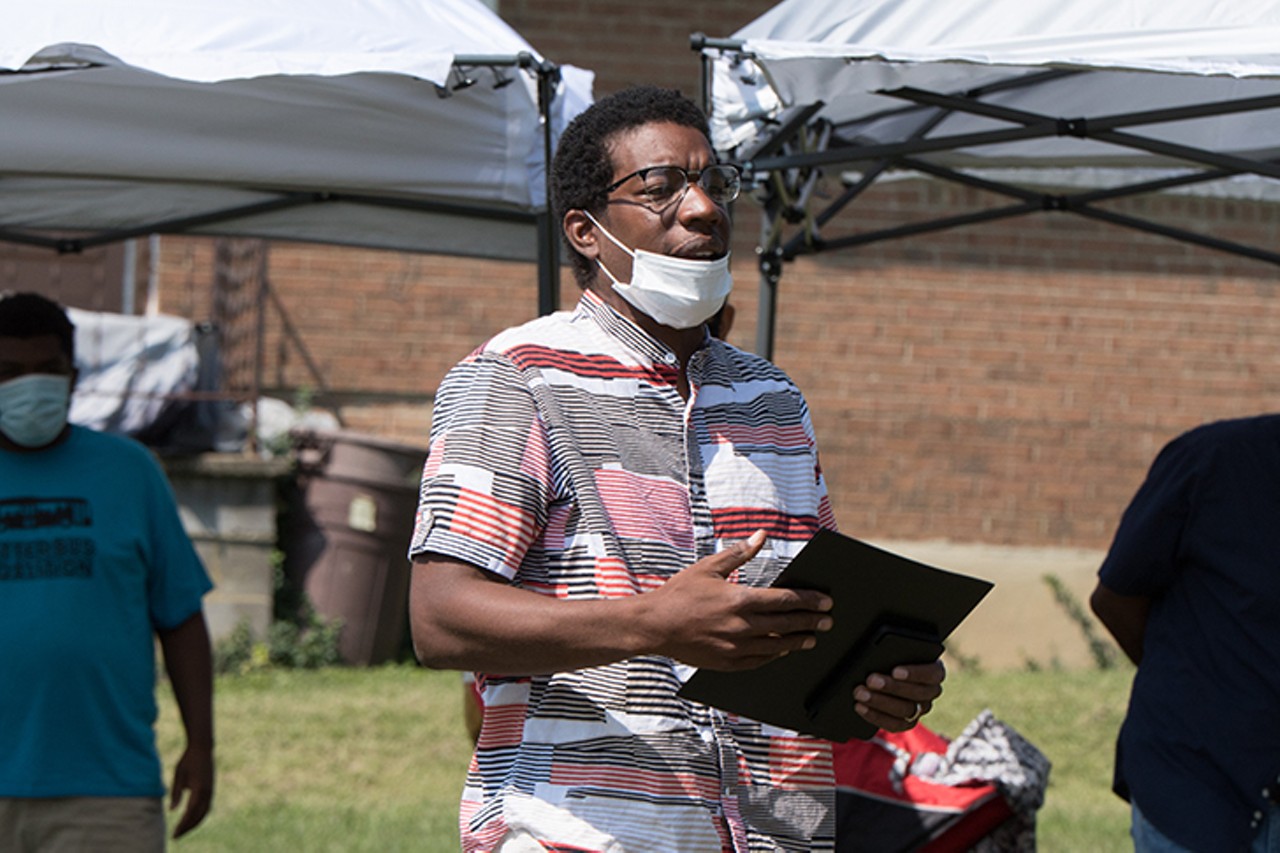 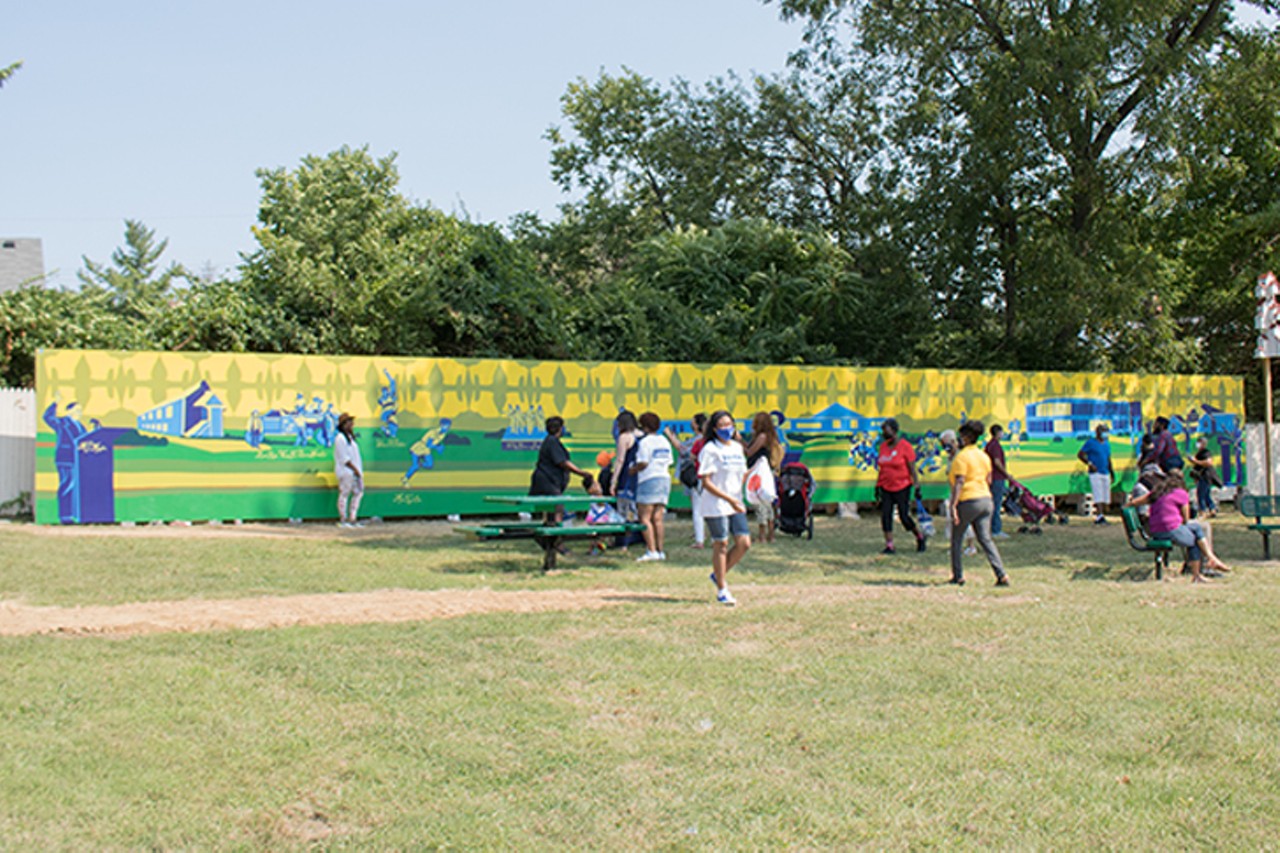 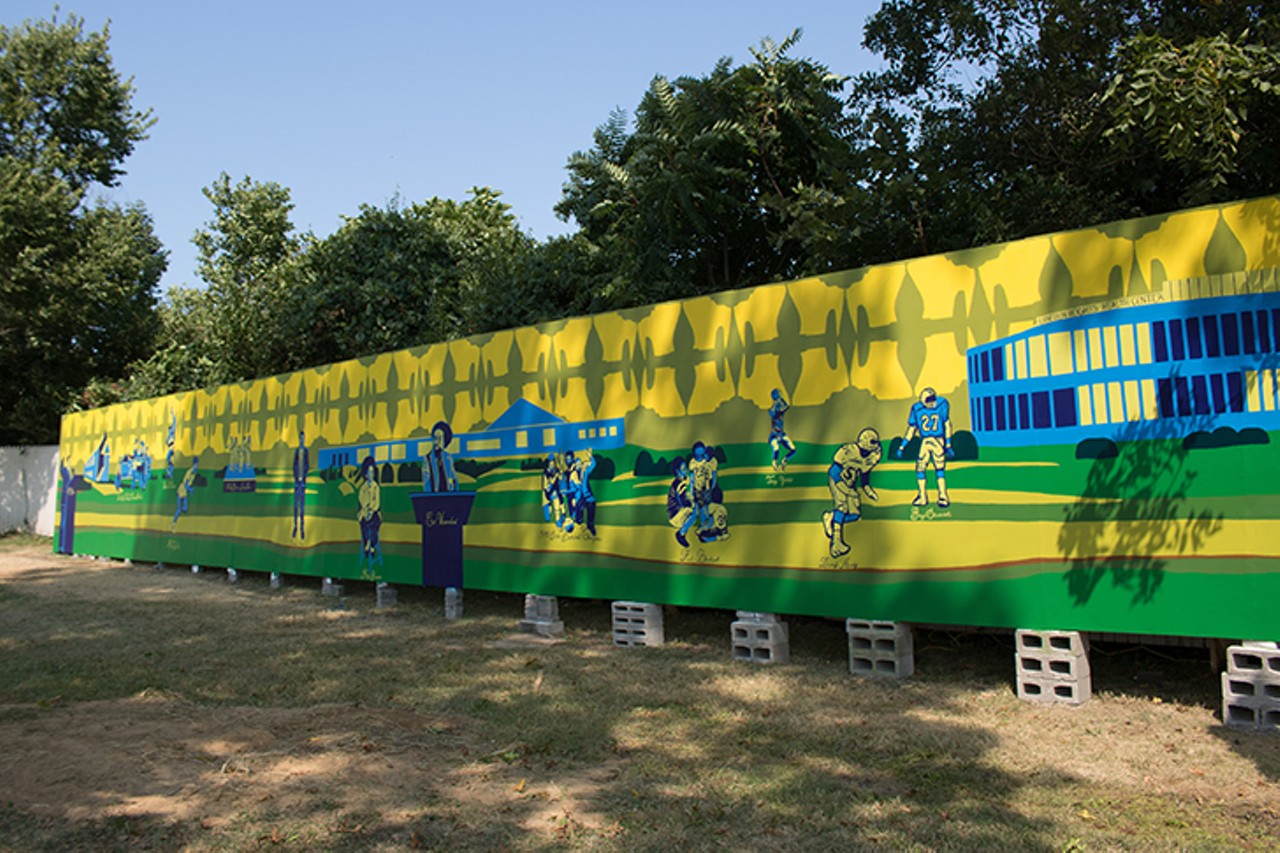 Grace Lawler
The title of the mural, "Zone 15," comes from an area nickname based on the Zip Code, 45215, says Brandi Colvin, who does PR for The Heights Movement. 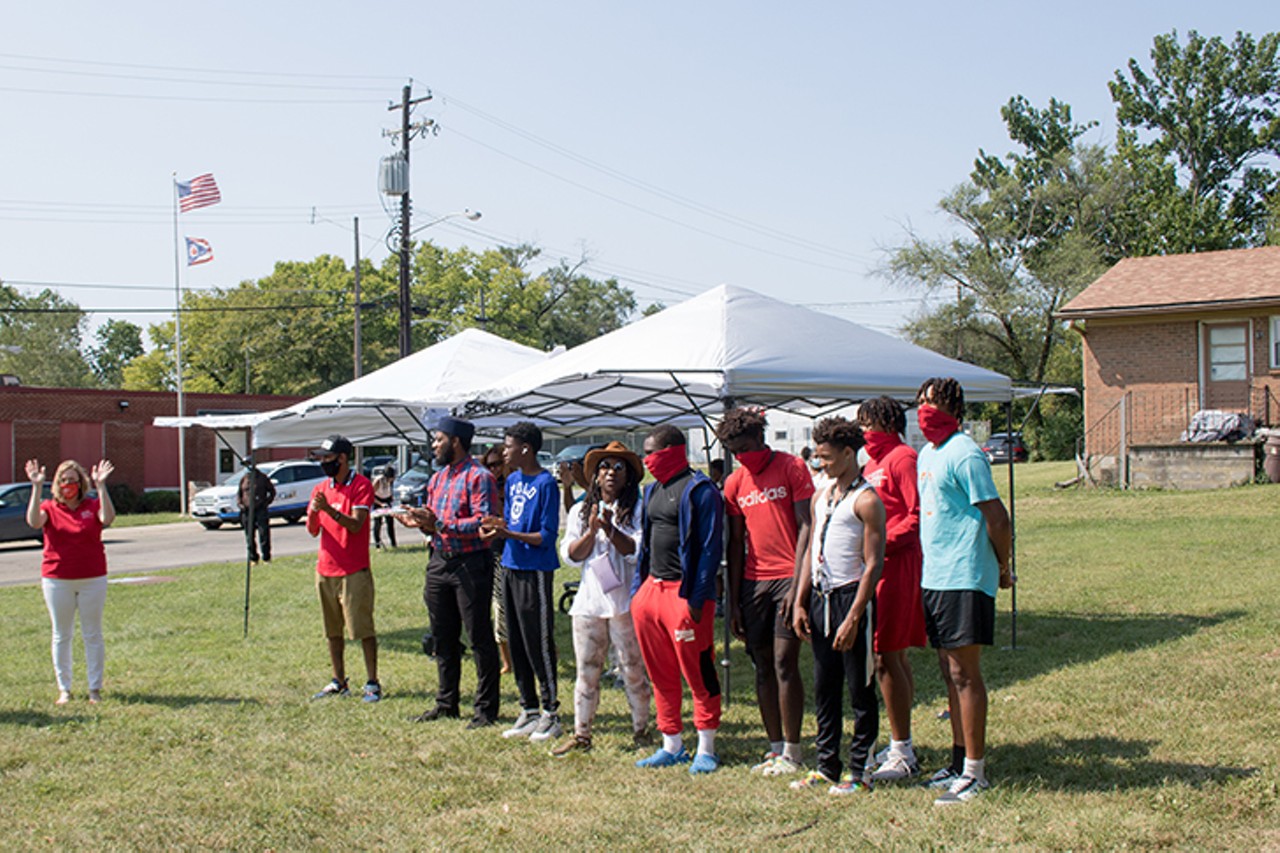 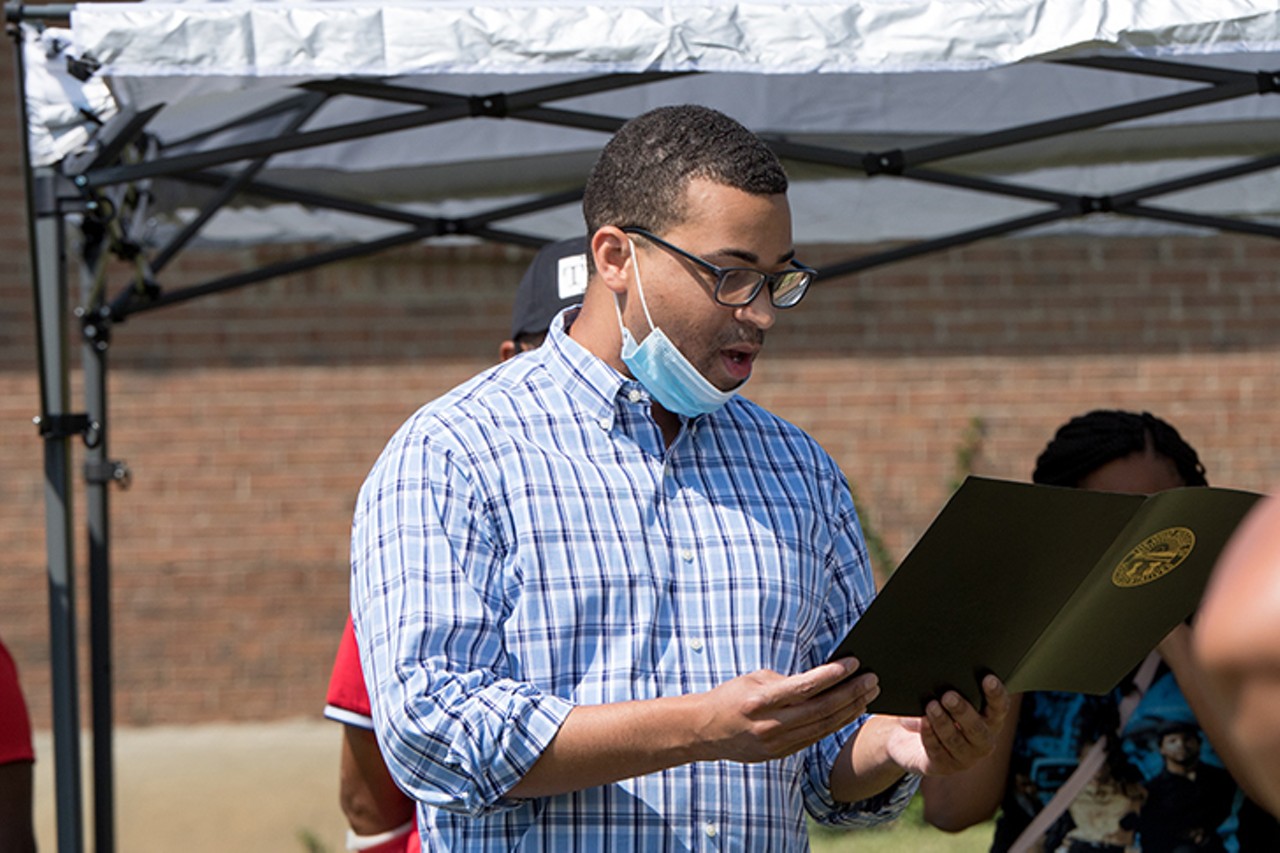 Grace Lawler
The Heights Movement became the newest chapter of My Brother's Keeper, an Obama Foundation initiative "to address persistent opportunity gaps facing boys and young men of color and to ensure all youth can reach their full potential." Grace Lawler
The Heights Movement wants to return "Lincoln Heights to past glory through sustainable projects that positively impact our residents educationally, financially, professionally, and physiologically," reads their website. 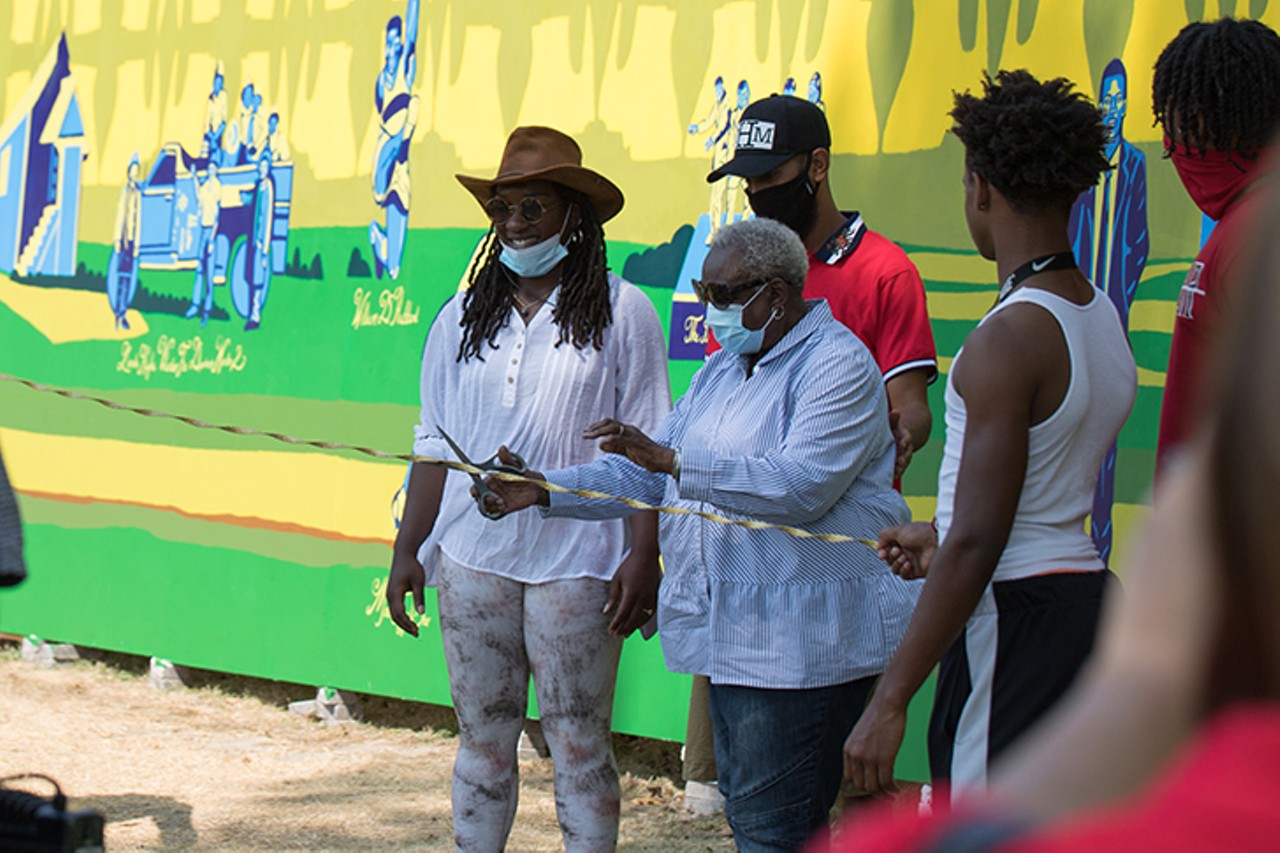 Grace Lawler
Dolores Lindsay, founder of the Lincoln Heights Health Center and founder, president and CEO of The HealthCare Connection, cuts the ribbon for the dedication and unveiling of "Black Excellence in Zone 15." Lindsay is pictured on the mural.