Bet on the Bay Horse

A neon memory of old Cincinnati hangs at 625 Main St. — one that dates back to pre-Prohibition days. A trotting horse, legs outlined in cherry red, stands above white lettering that reads: Bay Horse Cafe.

The historic Bay Horse reopened this summer after co-owners and partners Fred Berger and Lori Meeker spent the past two and half years restoring the building. That vintage sign took eight permits to rehang.

Berger can trace the bar’s history as far back as 1817. Originally, it was located on Water Street by the river. As the name may have foreshadowed, the bar had to move to Longworth Street prompted by frequent flooding before claiming a spot on Fifth Street.

Back then, Fifth Street was a place where horses were sold. One day, a horse got away and walked into the bar (according to Berger, he wanted a stiff drink) and the name stuck. Before that, no one remembers the name. In 1962, the Bay Horse moved to its current location on Main Street and then closed in the early 2000s.

Inside, newspaper clippings and restored photographs (given to them by the previous owner’s great-great granddaughter) add context to the exposed-brick walls. “It’s a museum with a liquor license,” Meeker says.

She grabs an already worn pamphlet from behind the bar that details its history; a conglomeration of Berger’s research, he takes it and flips through the stories that led him to buy the place.

“(There are) a lot of bars in town that have old stuff on the walls, but this is our stuff,” Berger says, pausing to gesture at the framed black-and-white memorabilia. “There is something about everything here. Most of it is history.”

The majority of the neighborhood bar was revived instead of replaced, including the cerulean-tiled flooring, brown tin roof, frosted windows (that open in warmer weather) and a six-foot trough-like urinal, which takes up the length of the back wall and will most likely be repurposed into a bloody mary bar. Only open for six months, the Bay Horse has already turned a profit.

“Simplify things,” says Meeker, who was partly inspired by the memory of her grandmother’s Gin Rickeys. “Everything in the world is just so complicated now it seems. When you go out to get a drink: one, you don’t want to pay $13 for it and two, you kind of want to know what’s in it.”

As far as food, there are five paninis to choose from — each costs less than $10 and each plays on the “horse” theme. There’s the Triple Crown (ham, turkey and roast beef on ciabatta), American Pharoah (smoked Virginia ham, Swiss and Dijon), Secretariat (oven-roasted turkey, provolone and spinach), Man O’ War (roast beef and sharp cheddar with a mayo/horseradish mix) and the Trifecta (provolone, sharp cheddar and swiss cheese).

Meeker’s first encounter with the Bay Horse happened years before. She worked at the Vernon Manor Hotel in Clifton for 28 years before it closed in 2009. One Christmas Eve, she and a co-worker went for a drink at the Bay Horse after a long night (back then, the bar was open at 5 a.m.). She recalls a distinct, pungent smell (now absent) — a mixture of urine, vomit and stale beer, according to Berger’s estimates.

“It was a stag bar. Women weren’t allowed in,” she says. “When I came in one early morning I said ‘Give me two Bud Lights’— that’s before I became a beer snob — and (the bartender) said ‘Well, you can have two beers, but you all have to sit over there.’”

Ironically this stag bar is now hers. “It’s a good feeling. It’s liberating,” she says, laughing.

“We had a Christmas get-together at the Palomino for our employees,” Berger says, glancing back at Meeker and patting her knee. “Lori was in charge of putting that together and I just saw a twinkle in her eye that she was excited about this.”

She nods her head; the same twinkle appears. It’s her first time owning a bar, despite working at one for nearly three decades.

A customer walks in, pointing to the 13-foot couch (it once fit an entire rugby team) in the back room and asks, “Is that an old couch or a couch made to look old?” Then Meeker and Berger chat with him as if they’ve been lifetime friends. The couple points to newspaper clippings, stories they now know intimately. “There’s an amazing ghost memory of this place,” Berger says.

Part of that memory is Hudepohl beer. The bar was once the largest distributor of the brand, a legacy they want to uphold. “We’re a Cincinnati bar; we need to serve Cincinnati beer,” Berger says.

But not just craft brews “because that’s not what the normal guy would drink,” he adds.

Before Bay Horse, the building housed the Grand Cafe. Flipping through photographs, you can tell the differences in the eras by the beer each place sold. Open at 5 a.m. and closing at 2:30 a.m., the bar served so much Hudepohl because people came in and out all day and the beer was cheap.

Above the bar there were once nine nano apartments that the couple is now renovating to turn into Airbnb rooms. In the past, people who lived in the rooms would come down every day for lunch or a drink (they had no kitchen space). Berger laughs, saying that it was once a “gun and knife club.” Now, not so much. Though the past regulars are now old, occasionally one will come in and share their own slice of history over a beer.

The employees (“the girls,” as Meeker calls them) know the stories, too — everything from a blind bowling team that formed after Prohibition to fundraising for the cure of Polio for the March of Dimes to pouring barrels of beer from the windows during prohibition and being a spot for All Star draft voting.

“The big thing is industrial, and industrial is fine, but its a little cold as far as I’m concerned,” Berger says. “You go to these places and they’re all slick and gray and we wanted sort the opposite. It has become what it was before: a neighborhood bar.”

Outside, the neon horse trots on: A symbol both of preservation and of new beginnings.

*edited; an earlier version of this story misspelled Hudepohl Photo: Hailey Bollinger
The historic Bay Horse reopened this summer after co-owners and partners Fred Berger and Lori Meeker spent the past two and half years restoring the building.

Photo: Hailey Bollinger
The revived and historic floors at the Bay Horse Cafe

Photo: Hailey Bollinger
The bar was once the largest distributor of Hudepohl, a legacy they want to uphold. “We’re a Cincinnati bar; we need to serve Cincinnati beer,” Berger says.

Photo: Hailey Bollinger
Straightforward cocktails and schooners of Hudy are popular drinks at the Bay Horse.

CityBeat has been in the business of curating the Best Of Cincinnati® for more than 25 years, highlighting the city’s most outstanding selections in… 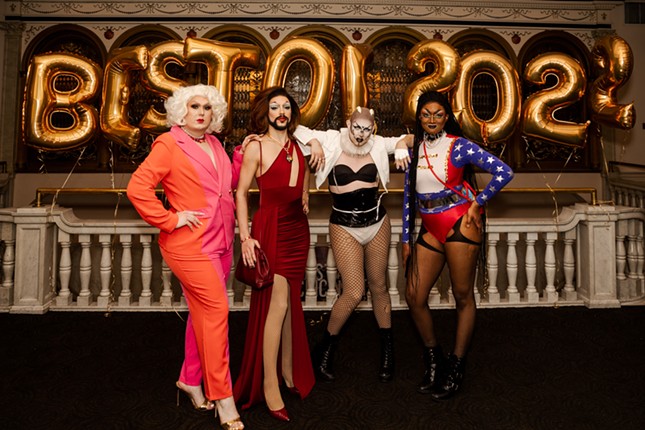 CityBeat has been in the business of curating the Best Of Cincinnati® for more than 25 years, highlighting the city’s most outstanding selections… 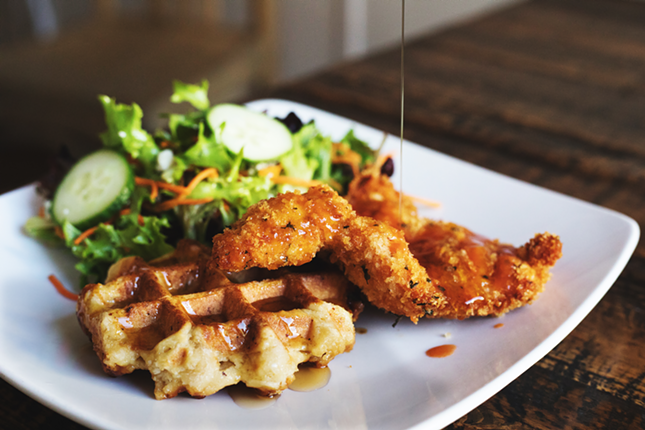 Every year, CityBeat publishes the Best Of Cincinnati®, wherein readers and staffers alike pick which bars are the booziest, which people are… 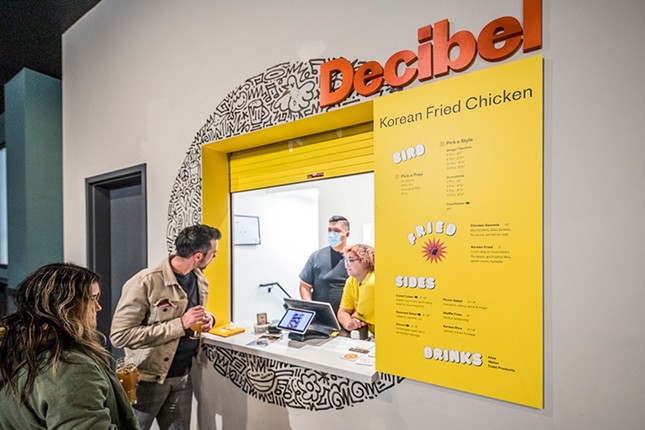 These are Cincinnati's Best Restaurants, According to CityBeat Readers

Ask any person what their favorite food is, and one of the top answers is likely to be “pizza.” Not only because… 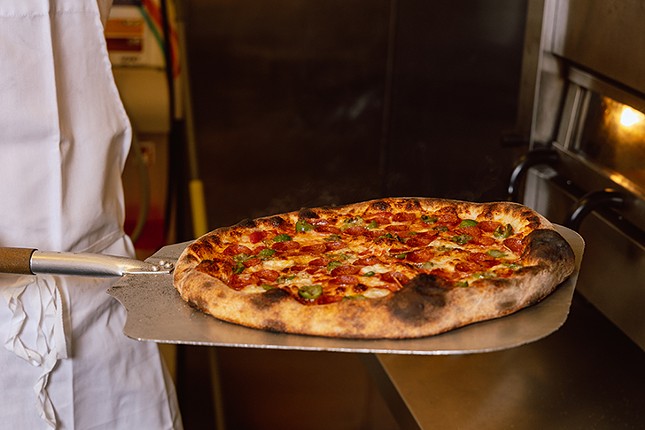