Hundreds turned out for Cincinnati’s 44th Martin Luther King Jr. Day march and associated events amid single-digit temperatures and an increasingly tense atmosphere locally and nationally. The various events at the Freedom Center, Fountain Square and Music Hall mixed celebrations of King’s life — he would have been 90 years old this year — with observation of the fact that this year marks what many historians believe is 400 years since the start of chattel slavery in the New World. After a breakfast at the Freedom Center, attendees heard remarks and prayers from various speakers and prayers from leaders from a number of different faith traditions. After that, a long procession marched slowly up Vine Street singing, “We Shall Overcome” and “This Little Light of Mine,” voices highlighted by puffs of steam. The procession stopped at Fountain Square for more remarks from faith leaders from local churches, the Islamic Center of Greater Cincinnati and other groups, including representatives from Cincinnati’s indigenous communities spoke and performed a traditional prayer and song. “We stand in a divided nation, and a divided earth,” Rev. Charles Graves said during a prayer on Fountain Square. “Give us strength always to stand together against every form of violence and evil, oppression and degradation. Grant us daily the courage to protect the immigrant and the widow, the underpaid and the overworked, the imprisoned and those with nowhere to lay their head. Empower us to never be impressed by unjust power and oppressive wealth.” Afterward, the march continued to Music Hall, where marchers were greeted with hot chocolate, music from the MLK Chorale and a full program of performances and speeches, including remarks from Cincinnati Mayor John Cranley and poetry from 10th-grader and WordPlay poet Chloe Constantinides. The event culminated with a keynote address by Rev. Derek Terry, Pastor of St. Peter’s United Church of Christ in Cincinnati. Terry has published two books and has appeared on CNN, the Oprah Winfrey Network and other national platforms. Terry’s remarks focused on this year’s theme — “400 Years of Slavery: It Stops With Us.” Terry used the words of Maya Angelou and Paul Laurence Dunbar’s poem “We Wear the Mask” to explore that theme before arguing that many of the oppressions that started with slavery and the subjugation of indigenous people at Jamestown in 1619 continue in modern America. Terry then suggested ways forward, including equitable access to educational, economic and social opportunities. “Two-hundred and fifty-six years of slavery were not erased by the 12 years of the broken promises and the failure of reconstruction,” Terry said. “Ninety years of black code laws that led to Jim Crow. Sixty years of separate but equal schools. Forty years of racist housing policy. Not to mention the war on drugs, mass incarceration. Four hundred years of being slaves to laws and systems that not only oppress people who look like me, but work to literally steal and extract by every means available the economic assets of my people… it behooves us to remind those who wish to make America great again that if this country was ever great at any time in history, it was great for the white men in social, economic and political power who were great at devastating this country’s oppressed people.”
Photos by Nick Swartsell
Scroll down to view images 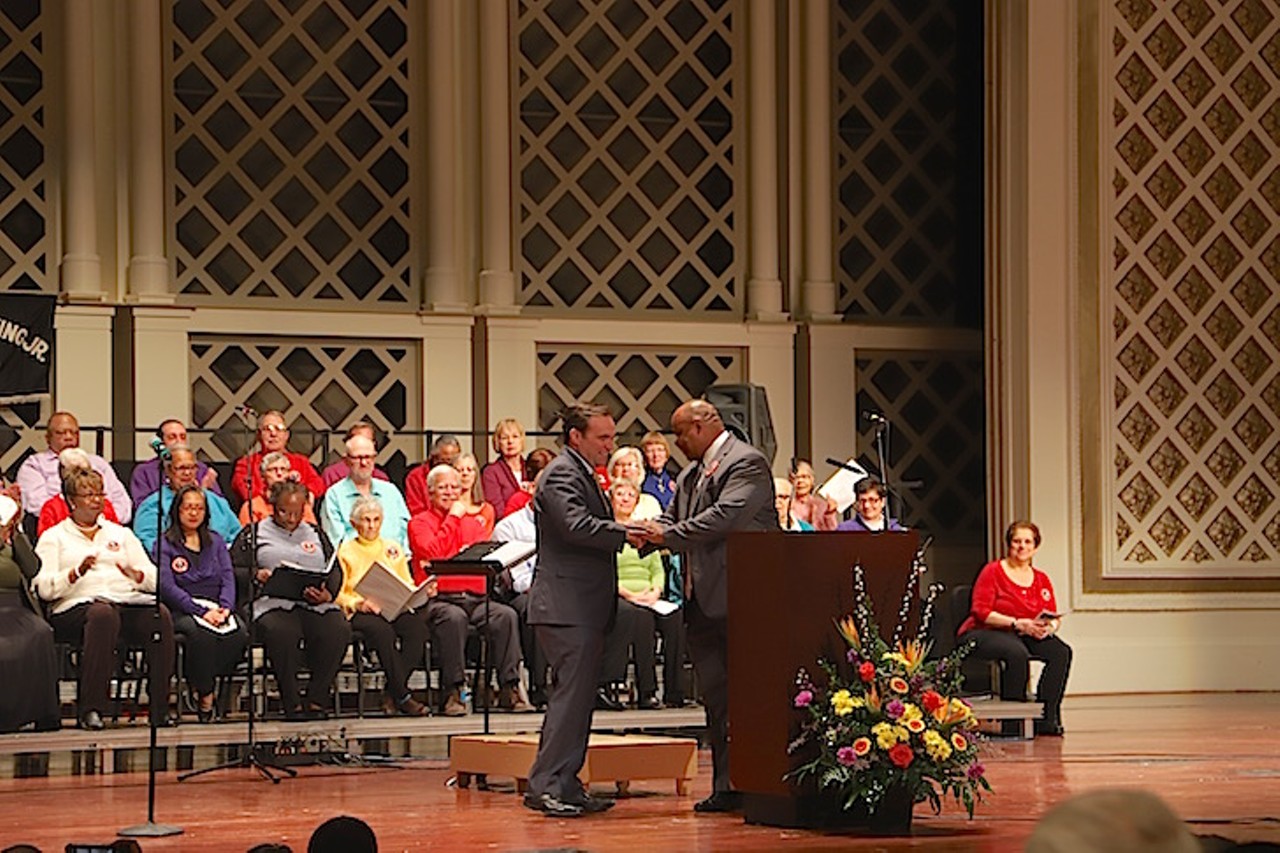