Eating at Boomtown Biscuits & Whiskey is one of those “experience” dinners. But unlike the ones you love to hate (or love to love) in Gatlinburg, Tenn., this one is just kitschy enough to be entertaining, yet delicious and thoughtfully curated enough that it’s poised to be your next go-to date-night hangout.

The Pendleton restaurant is inspired by the trappings of the American frontier and California’s 19th-century gold rush. Its name is a nod to the term “boomtown,” which refers to the burst of economic and population growth of towns that popped up seemingly overnight during the California Gold Rush.

The eatery is divided into two distinct sides. One half feels more intimate, with elegant sidewalk windows and small tables, plus a tufted blue bench. The other side has long tables for group seating and a charming saloon-style bar with a brown Kraft-paper menu and a sign that says, “Stake Your Claim,” hanging above the liquor bottles and TV — which played Deadwood when I visited. Dark blue finishes and unpainted wood visually connect the two sides, with sporadic accents of gold. And the highly Instagrammable bathroom has artificial but striking gold “veining” on the tiled walls.

Choosing a cocktail or a whiskey is akin to panning for gold in soil made entirely of the stuff. Order a cocktail when you sit down so you have time for another before dinner is over — and then another for “dessert.”

The whiskey menu is extensive, given its presumed importance in the diet of frontier prospectors, and is broken up into bourbon (the largest selection), rye whiskey, American whiskey, Irish whiskey, Canadian whiskey and Scotch. There are four whiskey flights for adventure seekers. Not sure? The waitstaff is ready to help you decide on one (in suspenders, no less) should the selection prove to be overwhelming.

If straight booze isn’t for you, don’t be afraid to mix your liquors with the cocktail list. Each drink is crafted to perfection, priced between $5 and $12 and includes a clever icon to denote the type of glass it’ll be served in. I’m not telling you to choose the cute, antique cordial cocktail for the aesthetics, but the option is there if you want it.

There is some excellent imbibing to be had with the whiskey-based cocktails, but similar to the menu, Boomtown’s trick is that the high quality extends beyond the theme.

The Oh-Be-Joyful! ($9) includes rum, blueberry-granola cream liquor, fresh lime juice, blueberries and bitters. The color is perfectly Millennial in its pinkness, with a creamy foam on top and just the right amount of sweetness to marry well with a biscuit dinner.

Lest you suspect the “granola cream liquor” to be a ploy, my dining partner took a sip and proclaimed that the drink tasted like a delicious baked good, with a pleasant earthiness and fruity aroma.

On the other hand, there’s the Carriage House Express ($9), a strong tonic-type drink with bourbon, beet-infused sweet vermouth, orange cordial and bitters. It’s also delicious —the beet and bourbon play especially well together.

If you don’t want alcohol, your choices at Boomtown aren’t an afterthought. There is freshly prepared orange cream soda and housemade horchata, plus a selection of juices, coffee, iced tea and sodas.

At Boomtown, the true delight comes plated. The signature biscuit isn’t a run-of-the-mill thousand-layer flaked baked good. It’s a buttery, soft disc with a close crumb and a browned, lightly bubbled top that no breakfast chain can compete with.

The food menu starts with “Pick & Shovel Sandwiches.” All of these options feature fillings like fried chicken, barbecue short ribs or mush cakes with chimichurri tofu, stuffed between two biscuits.

The most popular sandwich — and the one I ordered — is the Yukon ($11), with fried chicken, gravy, smoked cheddar and thick-cut bacon. The option to add an egg is, theoretically, optional (and a $2 upcharge), but better thought of as an intrinsic part of the dish. This sandwich was sumptuous. My mind told me there were too many rich elements for one dish, but my mouth disagreed. Jokes were made about only eating half, but in the end there was nothing left to box up.

Besides the sandwiches, the menu offers “Prospector Plates,” which are more entrée-style than the sandwiches; “Bowls of Gold,” which are the requisite beans and grits but gussied up; “Sundries,” aka the sides you’ll want at least a few of; “Nuggets of Gold,” for condiments and dips; and “Sweet Fixins” for dessert.

My fellow diner got the vegetarian Hidalgos ($10) prospector plate, with chilaquiles, poached eggs, serrano gravy, ranchera, pico and cumin-lime crema. You can add pork for $3, and it’s worth it (if you’re not a vegetarian). Sweet and unusually spiced, I would go back just to grab a plate of it.

A fair warning on the chilaquiles: the traditional Mexican dish comes with simmered, lightly fried corn tortillas — which, naturally, don’t remain crunchy. For those unfamiliar with the dish, you may wonder if you’re being served soggy corn chips. Once you understand that this is the intent, these flavor bombs become addictive.

By this point, you may think the star of the show was the dreamy biscuit. Plot twist: It’s the greens y’all. For $4, the campfire greens packed more punch than the testosterone in a Spaghetti Western shootout. They were peppery, sweet and lip-smackingly savory, so much so that I wish I got my own instead of sharing with my dining companion.

We also got an extra biscuit side with black and blue jam. True to its name, the jam is made with blackberries and blueberries — mostly fruit with a little sweetener.

We got an extra helping of berries at dessert with Cascades ($7), a French toast made with biscuits and mixed berry compote, topped with house whipped cream and powdered sugar. I don’t need to tell you that this is what dreams are made of. The biscuits were toasted on the outside to get a satisfying “crunch” when your fork breaks off a piece, and the compote mixed with the whipped cream was light and satisfying.

Boomtown Biscuits & Whiskey breaks the mold — or rather makes a new, gold-nugget-shaped one — with its fun take on American favorites. 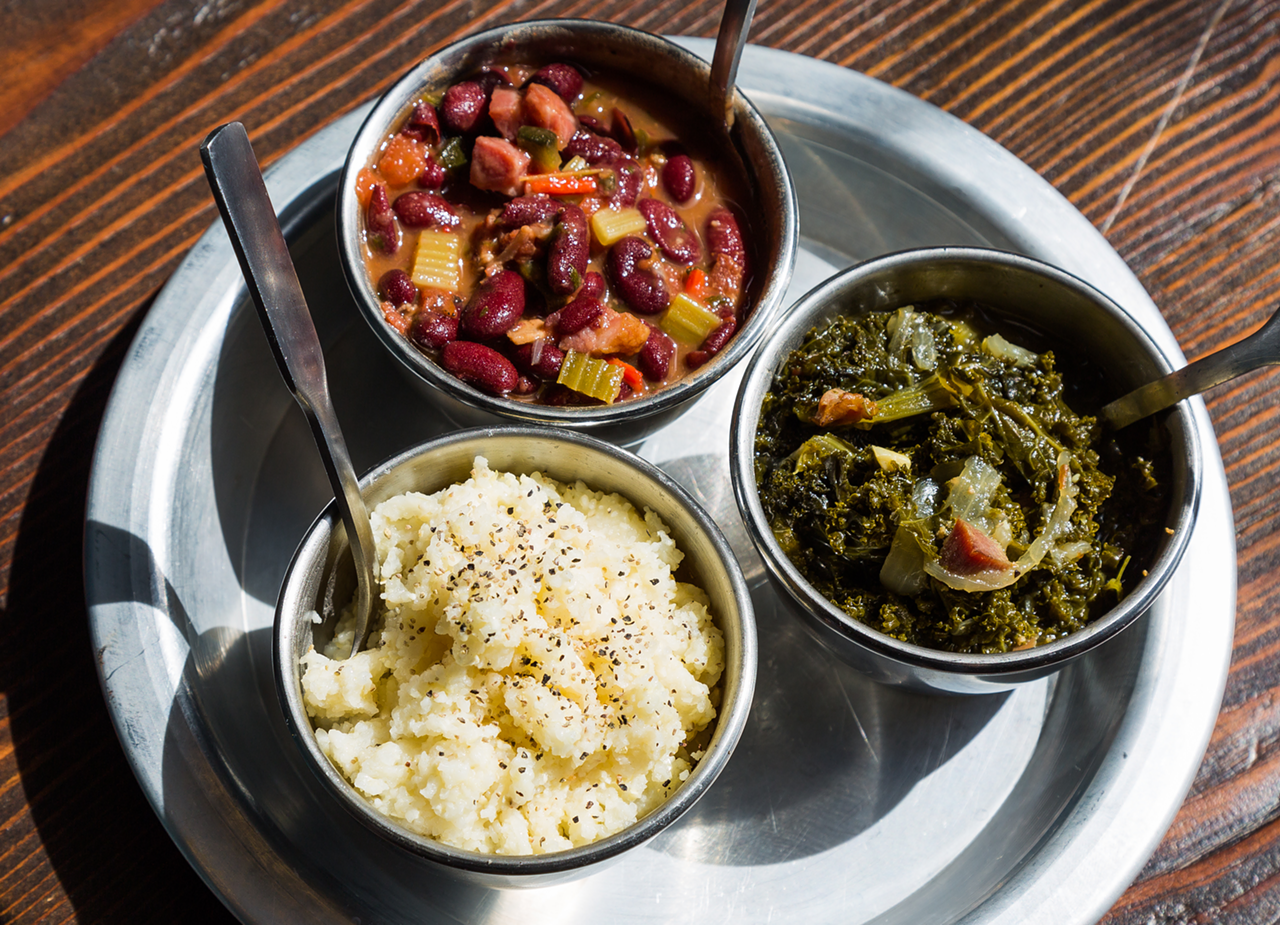 Photo: Hailey Bollinger
For $4, the campfire greens (right) packed more punch than the testosterone in a Spaghetti Western shootout.

Photo: Hailey Bollinger
One half feels more intimate, with elegant sidewalk windows and small tables, plus a tufted blue bench.

Photo: Hailey Bollinger
The other side has long tables for group seating and a charming saloon-style bar with a brown Kraft-paper menu and a sign that says, “Stake Your Claim,” hanging above the liquor bottles and TV.

Photo: Hailey Bollinger
The signature biscuit isn’t a run-of-the-mill thousand-layer flaked baked good. It’s a buttery, soft disc with a close crumb and a browned, lightly bubbled top that no breakfast chain can compete with. Photo: Hailey Bollinger
A flight of biscuits and gravy Photo: Hailey Bollinger
Choosing a cocktail or a whiskey is akin to panning for gold in soil made entirely of the stuff. Order a cocktail when you sit down so you have time for another before dinner is over — and then another for “dessert."