Everyone We Saw at the 2020 Cincinnati Women's March

Despite cold winds and a persistent drizzle, a growing crowd turned out for Cincinnati's iteration of the 2020 Women's March Jan. 18. The rally organized by local activist group United We Stand started with a couple hundred attendees at Sawyer Point downtown. A number of speakers addressed the crowd, including Cincinnati City Councilwoman Tamaya Dennard, Forest Park City Councilwoman Chelsea Nuss, former Hamilton County Juvenile Court Judge Tracie Hunter, women's healthcare advocate Elizabeth Hopkins, immigration activist Sandra Ramirez, poet Siri Imani, young activist Kelly Helton, Women Helping Women CEO Kristen Shrimplin and others. The original Women's March was held in January 2017 in Washington, D.C. to protest the inauguration of President Donald Trump, who has received heated criticism for his remarks about women, including some seeming to condone sexual assault. Local organizers also helped put together a Cincinnati iteration of the march that year and in 2018. Both of those events drew roughly 14,000 people, organizers say. The event has seen some controversy and schisms among activist groups both nationally and locally in the past two years, but organizers have vowed to continue the march. Despite an earlier cancellation, another Cincinnati event last year organized by local socialist groups and other activists drew hundreds to Sawyer Point. "In some places in the world, you don't get to gather as women and say, 'We want what you took from us,' " Nuss told the crowd. "In January 2017, over 5 million women across the globe mobilized, and I don't have to tell you why… they took a stand to demand equality, health care access, equal protection and to take back those inalienable rights that we feel are absolutely due to us. This day marked the single largest protest in American history. This isn't just a march, this is the single most powerful peaceful protest that exists." Speakers addressed a number of issues related to gender equity, including political representation to access to women's healthcare and abortion, immigration policy, protections for victims of sexual assault and gender-based violence and treatment of women prisoners in local jails. Dennard encouraged more women to run for political positions. "The reason you see me is because I want you all to see yourselves in government," Dennard said. "It is really, really important that we put ourselves in decision-making roles." Shrimplin blasted reductions to federal laws protecting women from sexual assault and urged action on the local level around those issues. "I know it's been a little bit cold, a little bit rainy, a little bit windy," she said. "But we cannot maintain any sort of complacency. We need every single survivor who is in this crowd today to know… that until our leaders show up and fight for the rights of survivors, we are going to show up, because together we are far more powerful than gender-based violence could be." After the remarks, a larger crowd of several hundred marched a 1-mile circuit through downtown Cincinnati, chanting and carrying signs, before returning to Sawyer Point. Cincinnati resident Sharon Corson and her husband Steve were among them. Corson says she is laser-focused on the 2020 presidential election and believes that women's votes will be the deciding factor. She's backing Democratic presidential primary contender Sen. Elizabeth Warren in the run-up to that contest, though she says she'd vote for "a ham sandwich" over President Donald Trump. "I came out for humanity," she said. "The election in 2020 is going to hinge on women." Corson said her concerns aren't just about national politics, however. She highlighted moves by the Ohio General Assembly that have increasingly restricted abortion providers. Those moves have shuttered a local women's clinic that provided health screenings on the west side operated by Planned Parenthood in the process — and almost closed another in Mount Auburn recently. "My healthcare and my reproductive rights — I think we're under attack on that," Corson said. "We've closed a Planned Parenthood center in town, and we're down to one."
Photos by Nick Swartsell and Kaitlyn Handel
Scroll down to view images 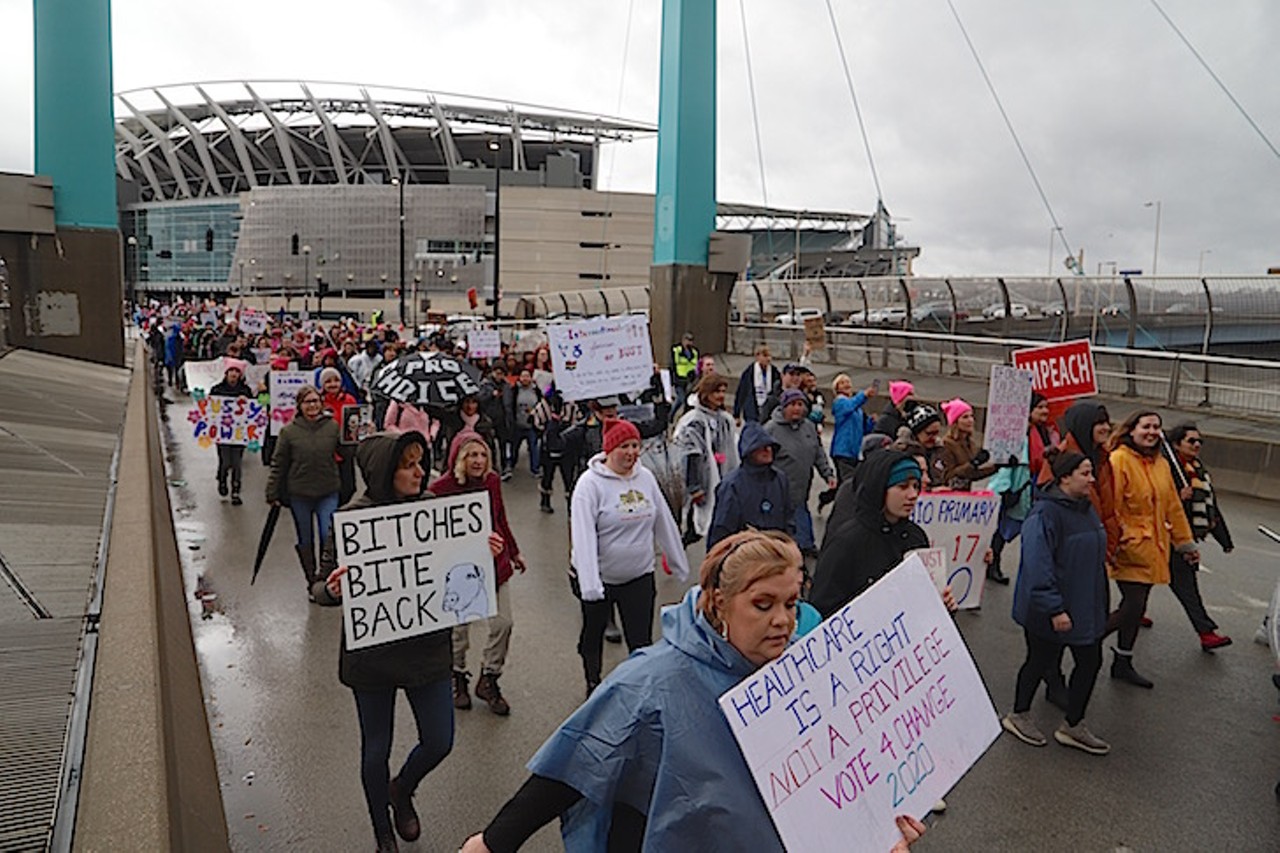 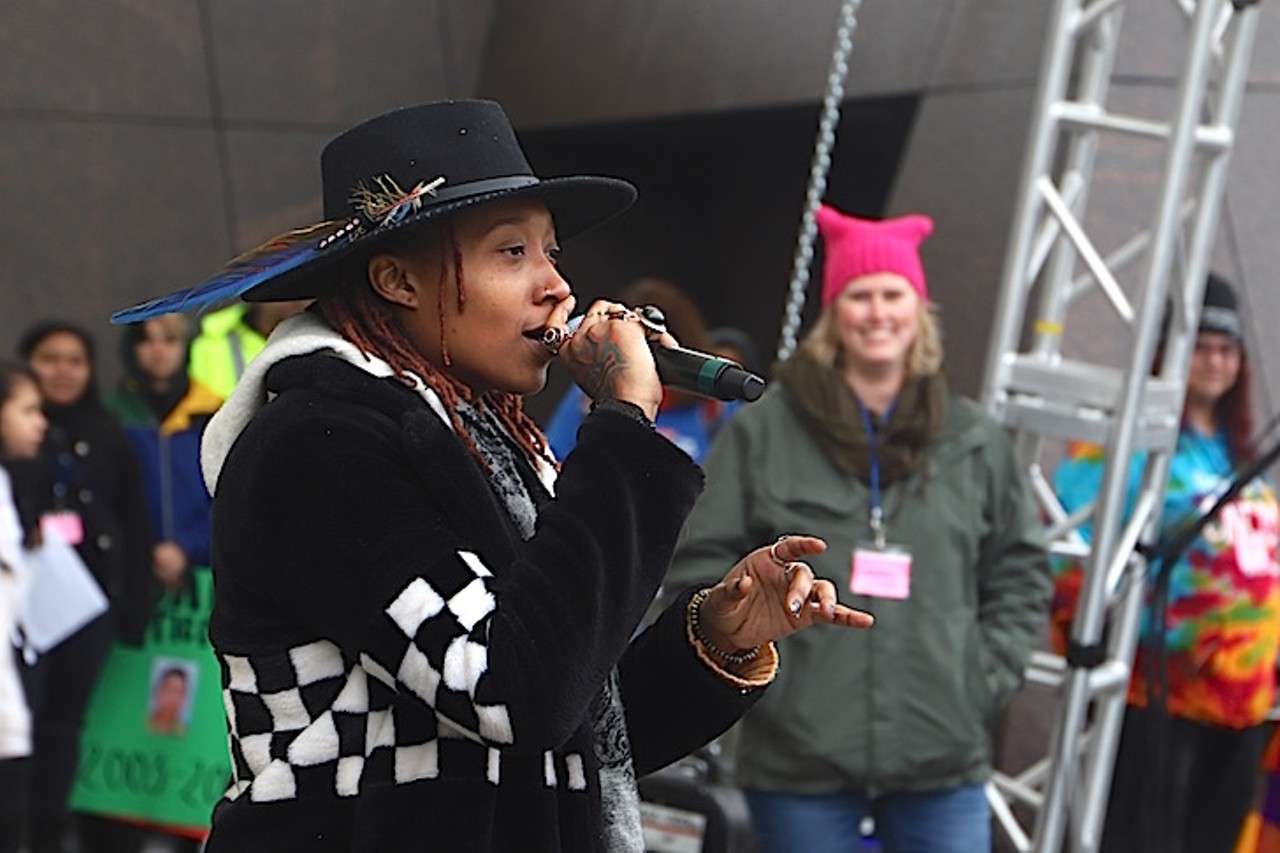 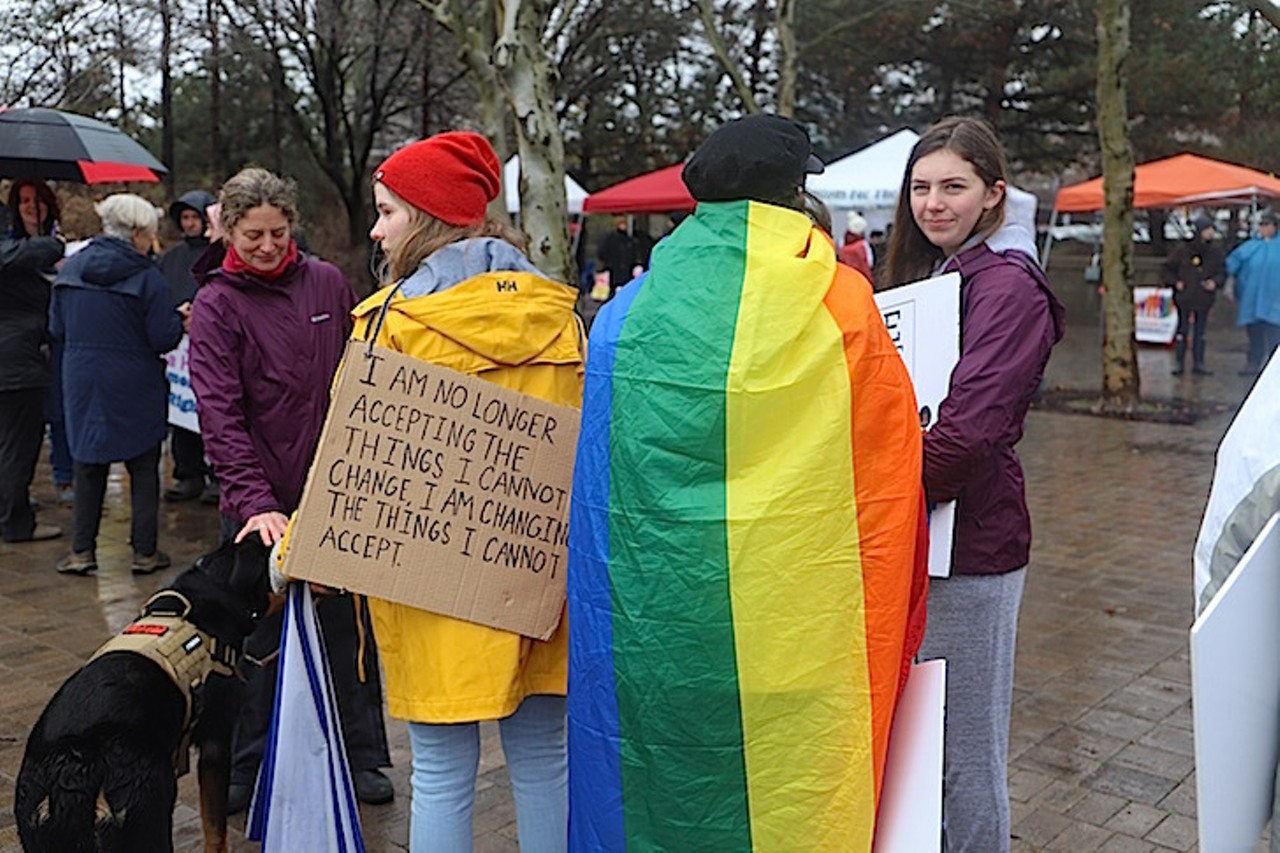 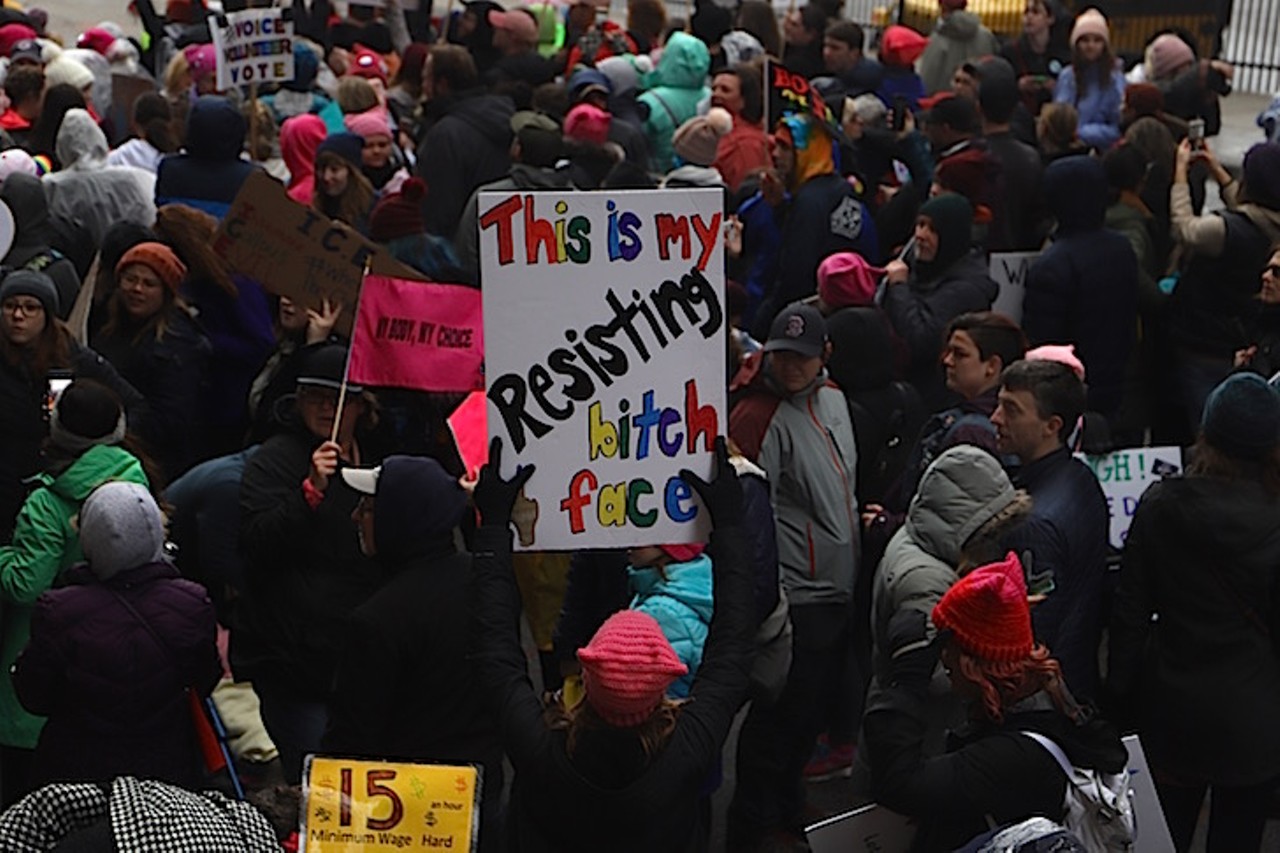 Nick Swartsell and Kaitlyn Handel
Young activist Kelly Helton speaks to attendees at the 2020 Cincinnati Women's March about the dearth of female politicians at the federal and state levels. 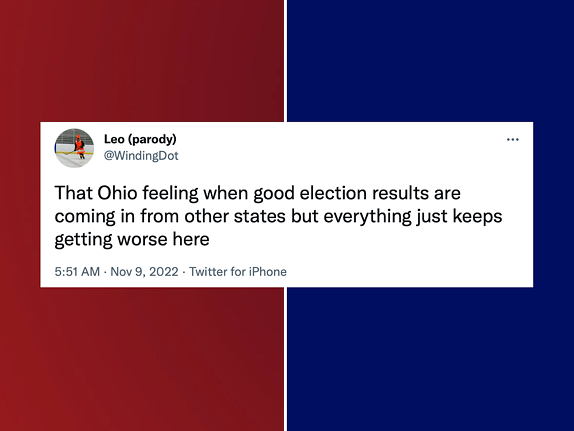 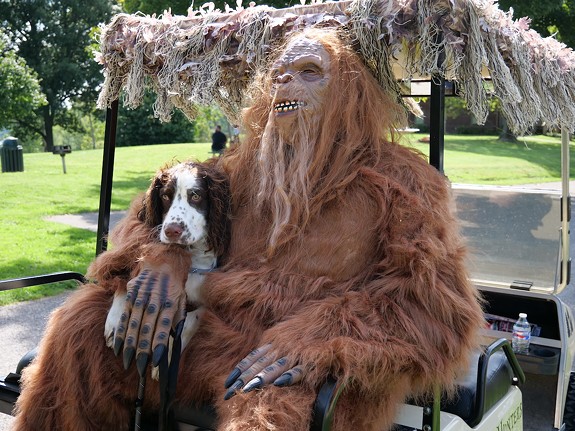 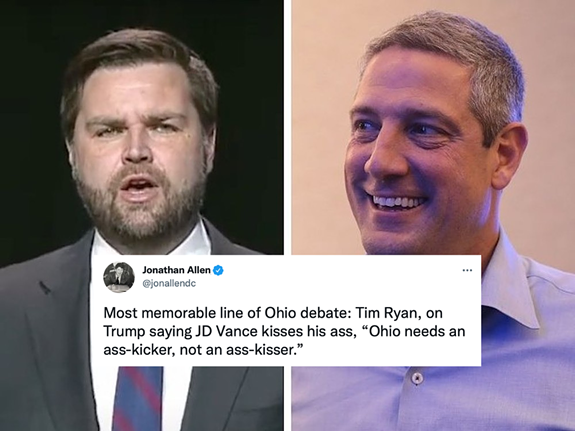 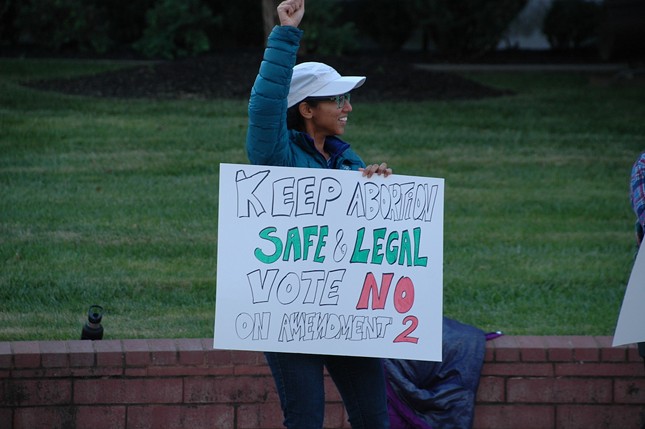