They called it the “World’s Fair of Cincinnati.” When the Centennial Exposition of the Ohio Valley and Central States first began to enthrall onlookers 130 years ago, way back in 1888, it was nominally slated to celebrate the anniversary of the City of Cincinnati’s founding. More to the truth, this incredibly lavish year-long exposition gave cause to spotlight the growing metro’s industry, commerce and rampant technological progress.

Unheard-of electric lights were seen everywhere; exhibit halls could be open — and illuminated — late into the night. Gondolas were imported from Venice, Italy, along with the necessary gondoliers to provide voyages along the Erie Canal (what’s now Central Parkway). For laughs, they even hauled in President Ulysses S. Grant’s Point Pleasant home. Really.

The ostentatious festival dominated city life for most of the year in 1888: planning, execution, excitement, crowds, tear-downs. It ran for more than 100 days, from July 4 to Nov. 8, open 9 a.m.-10 p.m. every day except Sunday. Cincinnatians subscribed for tickets in excess of $1 million, a tidy sum in that era; season tickets cost a whopping $5, and adult daily admission was 25 cents.

All in all, the fest featured 47 acres of unbridled play and 950,000-square-feet of exhibition space.

Read more about the expo here. 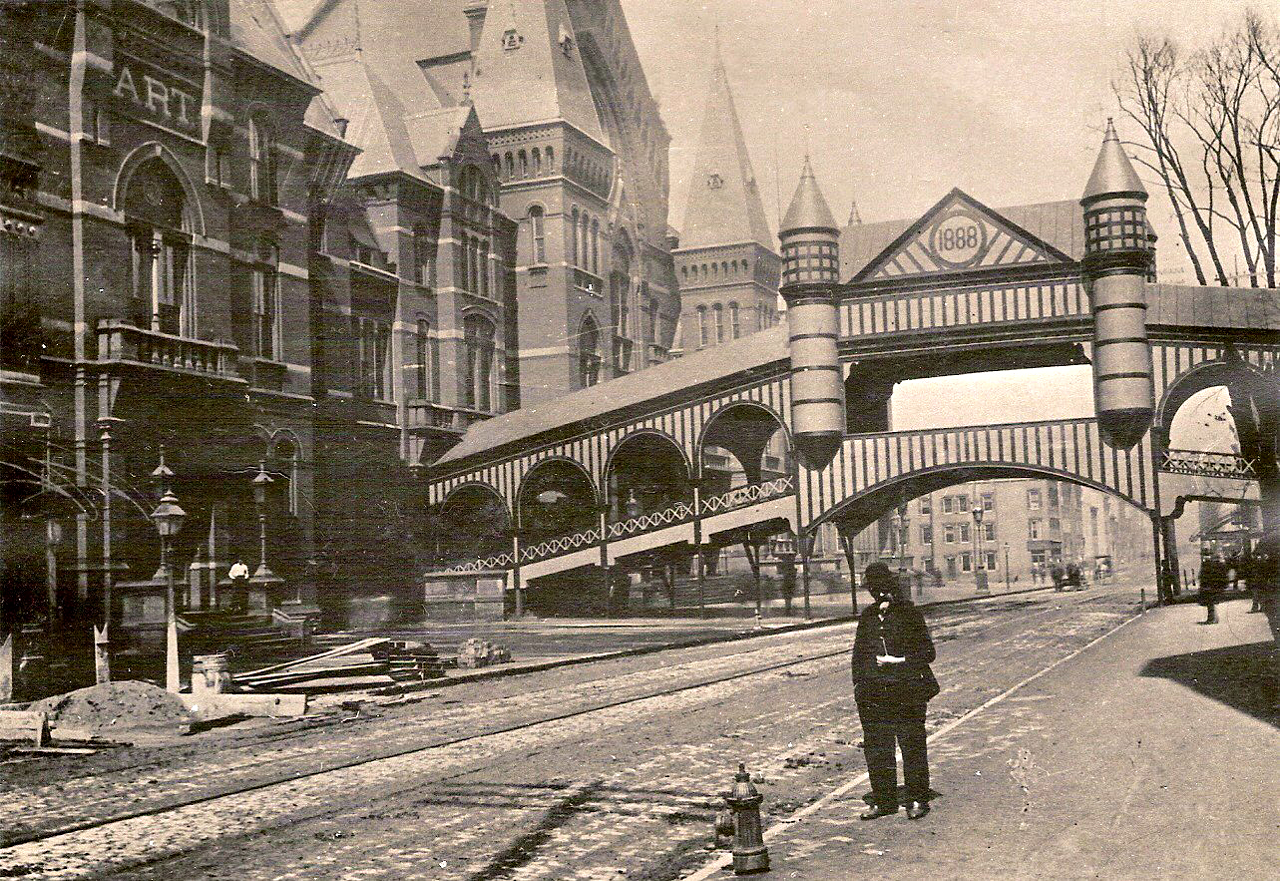 Photo: Cincinnati Historical Society
Music Hall was connected to expo buildings in Washington Park via a bridge over Elm Street

Photo: Society for the Preservation of Music Hall
An illustration of Music Hall and Park Hall in Washington Park. At the expo, the center of activities revolved around the recently constructed Music Hall. It was completed in 1878 in part to house this and other expositions, along with choral festivals. The giant auditorium served as the anchor for the temporary buildings erected in and around Washington Park — Machinery Hall and Park Hall — to create the largest connected covered area ever used for an exposition on the continent. Photo: cincinnativiews.net
An illustrated overview of the exposition grounds Photo: The Official Guide of the Centennial Exhibition of the Ohio Valley and Central States, 1888
Music Hall was also home to Horticulture Hall, full of “nooks and grottoes, trellised walks, rare plants, (and) hanging fountains, all lit up with parti-colored electric lights.” In the grottoes, you could have ice cream or soda served to you by “young girls handsomely uniformed.” An iron rainbow adorned with different colored flashing and twinkling glass lights was set up above a waterfall “thirty feet in height, which was studded with 100 or more colored electric lamps, which glowed like a bed of electric fire among the rocks." Photo: The Official Guide of the Centennial Exhibition of the Ohio Valley and Central States, 1888
Music Hall 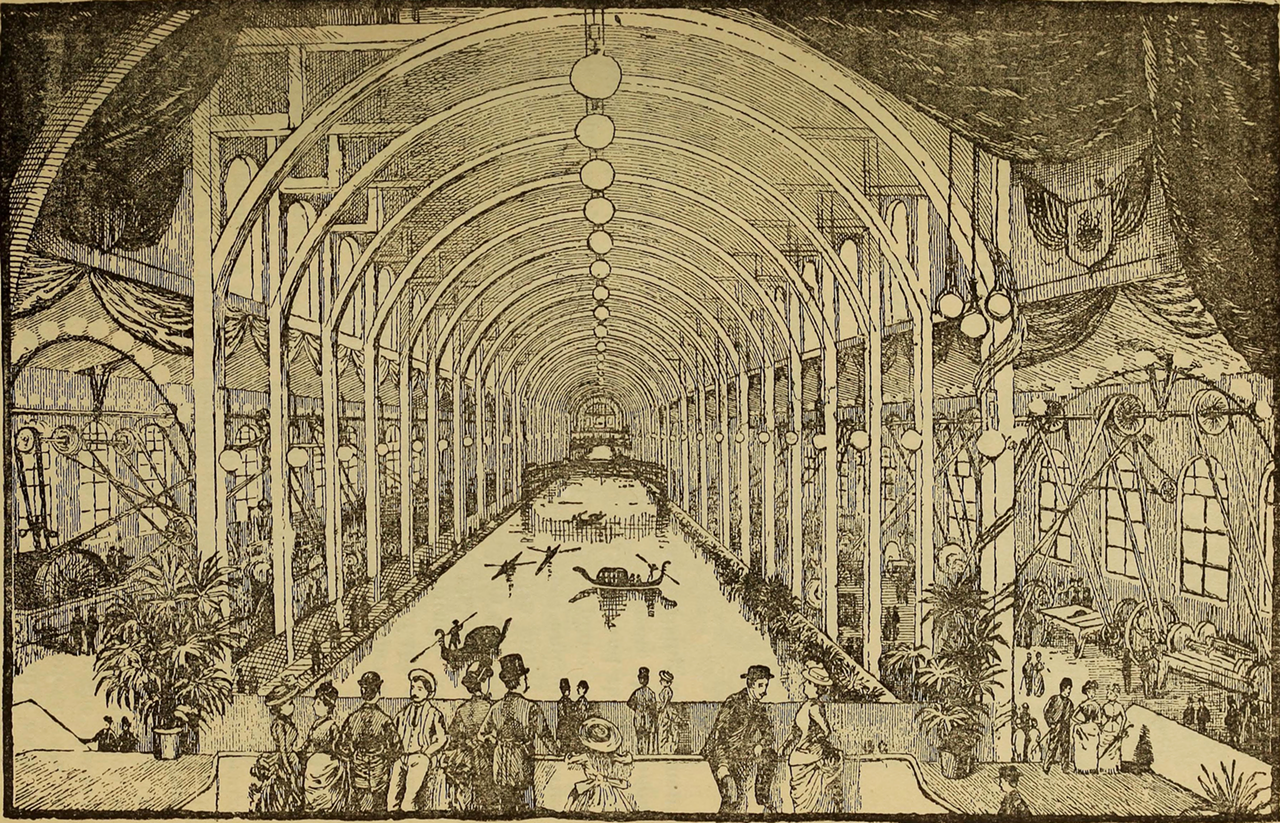 Photo: The Official Guide of the Centennial Exhibition of the Ohio Valley and Central States, 1888
Machinery Hall was a 1,300-foot-long building with twin towers constructed over the Miami-Erie Canal (where Central Parkway is today) from 12th to 15th streets. It was 150-feet wide in the center where it connected with Music Hall and the aisles on both sides of the canal, which ran down the center of the building, were devoted to machinery and factory technology exhibits; in fact, the several hundred exhibits produced the power necessary to light and operate the other exhibition halls. Photo: Harper's Weekly
An illustration of gondolas in Machinery Hall. Daily performances were staged on ships on the covered waterway, as were canal races and gondola rides.