Growing up in a household filled with complex and flavorful ethnic cuisine (Persian and Italian), American food, for me, has been fairly synonymous with mashed potatoes, some kind of meat offering, warm sauces and a smattering of vegetables. When I’m most hungry and least motivated, I gravitate toward dishes like these; ones I don’t have to think too hard about when ordering because I have a good approximation of what I’m going to get.

Kitchen 1883 lives up to its “New American comfort food” concept by taking the guesswork out of any dish for the consumer, and leaving them with a nice, pleasantly full feeling.

I stopped by Kitchen 1883 in Union, Ky. on a drizzly Saturday evening in February with two girlfriends in tow. The restaurant is sandwiched between a Kroger supermarket and a Kroger liquor store. This might seem strange unless you know that Kitchen 1883 is the grocery chain’s first foray into sit-down casual dining. In fact, it’s one of the first grocery-chain-affiliated restaurants in the country. Fun fact: It’s named after the year Kroger founder Barney Kroger opened his first store.

Opened in November, Kitchen 1883 is distinctly its own business. The separation of the restaurant from the neighboring Kroger is so distinct that Kitchen 1883’s food is sourced from a completely separate entity — a restaurant-grade food provider. This is a point executive chef Christopher Bushelman (formerly of Incline Public House) makes clear.

“We always say Kroger has associates and their employees and customers (but) we have team members and guests instead of customers,” Bushelman says. “We want that mentality of, ‘We’re in the hospitality business of serving food and drinks and good times.’ ”

I found this reasoning intriguing as a restaurant layperson. I would assume that Bushelman could walk next door to Kroger and select fresh meat or vegetables (“Occasionally if I run short on a tomato, I might go over to Kroger and pick one out,” he admits), but restaurants necessitate certain food providers.

On this particular Saturday, I was unbelievably hungry. I had only consumed a small, late breakfast, so I was looking forward to digging into Kitchen 1883’s options — and stealing a few bites from my friends.

The restaurant’s online menu features a prominent picture of some meat-and-mashed-potato dish, and I correctly assumed it was the braised beef short ribs ($18) with horseradish smashed potatoes and blistered carrots; I followed my eyes with my stomach and ordered it.

The short ribs were very tender, falling apart with the slightest abrasion of my fork, and I devoured the entire plate. (Not literally the plate. I wasn’t that hungry.) The horseradish potatoes were sharp but complementary, the carrots kind of superfluous, but I liked their varied colors, and the pan sauce was the perfect consistency.

I’m getting ahead of myself, though. First, we ordered the pretzel bites and beer cheese appetizer ($6) and our smiling server brought them out posthaste, much to our delight. The bites were perfect — not too doughy, not too tough, crisp on the outside and with a cholesterol-friendly amount of salt. The beer cheese was made with Braxton beer. It was a bit runnier than other beer cheeses I’ve consumed, but still had the right tang and flavor. I stuck with water, which was refilled often (a welcome surprise), but the wine list was extensive and beer options were local and varied.

“If we’re going to grow the concept, we should be 70 percent concept and 30 percent local, not just (regarding the) ingredients but also the taste of your guests in that region,” Bushelman says, ticking off locally sourced options on the menu, which include honey from Owensboro, Ky., Weisenberger Mill grits (available on the brunch menu) from central Kentucky and produce from the Cincinnati-based 80 Acres Farms. “What they eat in New England’s not going to be what they enjoy in Kentucky.”

Maybe not, but my friend ordered the beer-battered cod ($13) — made in-house, also with Braxton beer — and it’s a distinct winner in any region. It was crispy and crunchy on the outside, perfectly flaky on the inside and served with french fries and a generously filled ramekin of remoulade.

I also ordered a beet salad ($11) and was surprised by the massive quantity. Bushelman says there’s now an option to add a protein to the salad offerings, which elevates them to full-on entrée status, but I wasn’t made aware of this when I went — probably because I ordered my entrée and salad at the same time. No big deal. There’s also a half-portion, which I didn’t know about, but in this instance, I didn’t particularly care. (Super hungry.)

The salad comes with roasted and cubed beets, oranges, cilantro, Lexington, Ky.’s Boone Creek goat cheese and pumpkin seeds. I did expect the beets to be a bit more plentiful, but overall it was a winner.  My friends thought so, too.

For dessert, my gal pals and I split the Brûléed Apple Pie “Slab” ($6), which was akin to an open-faced apple cobbler, served with a scoop of vanilla ice cream on top. It was a bit too doughy. Other dessert options include ice cream, sorbet and fried chocolate chip cookie dough.

After your meal at Kitchen 1883, if you’re thinking that you’d like to traipse over to Kroger and pick up the ingredients to make the same dish at home, you’re currently out of luck — but that option may soon be on the horizon.

In the meantime, the grocer offers prepared meal kits in their stores, similar to mail-order Blue Apron offerings, called Prep+Pared. And this month, Kroger just opened a culinary innovation center, where Bushelman says he works alongside the Kitchen 1883 culinary team (including Jay Denham and Lisa Kagan) testing out recipes to bring to the restaurant.

“We want to innovate and grow Kroger and be a leader in food creativity and development. The first thing that pops in my head is Kitchen 1883. We want to be the best,” he says. 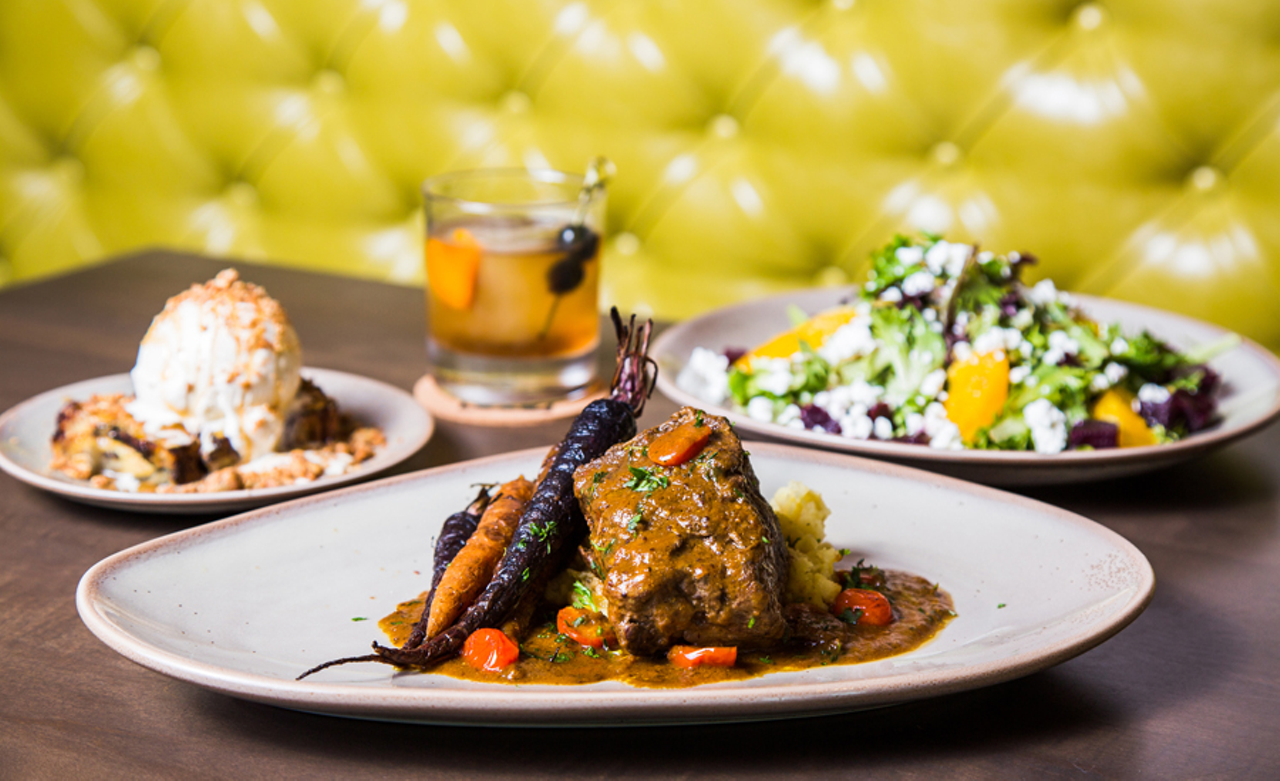 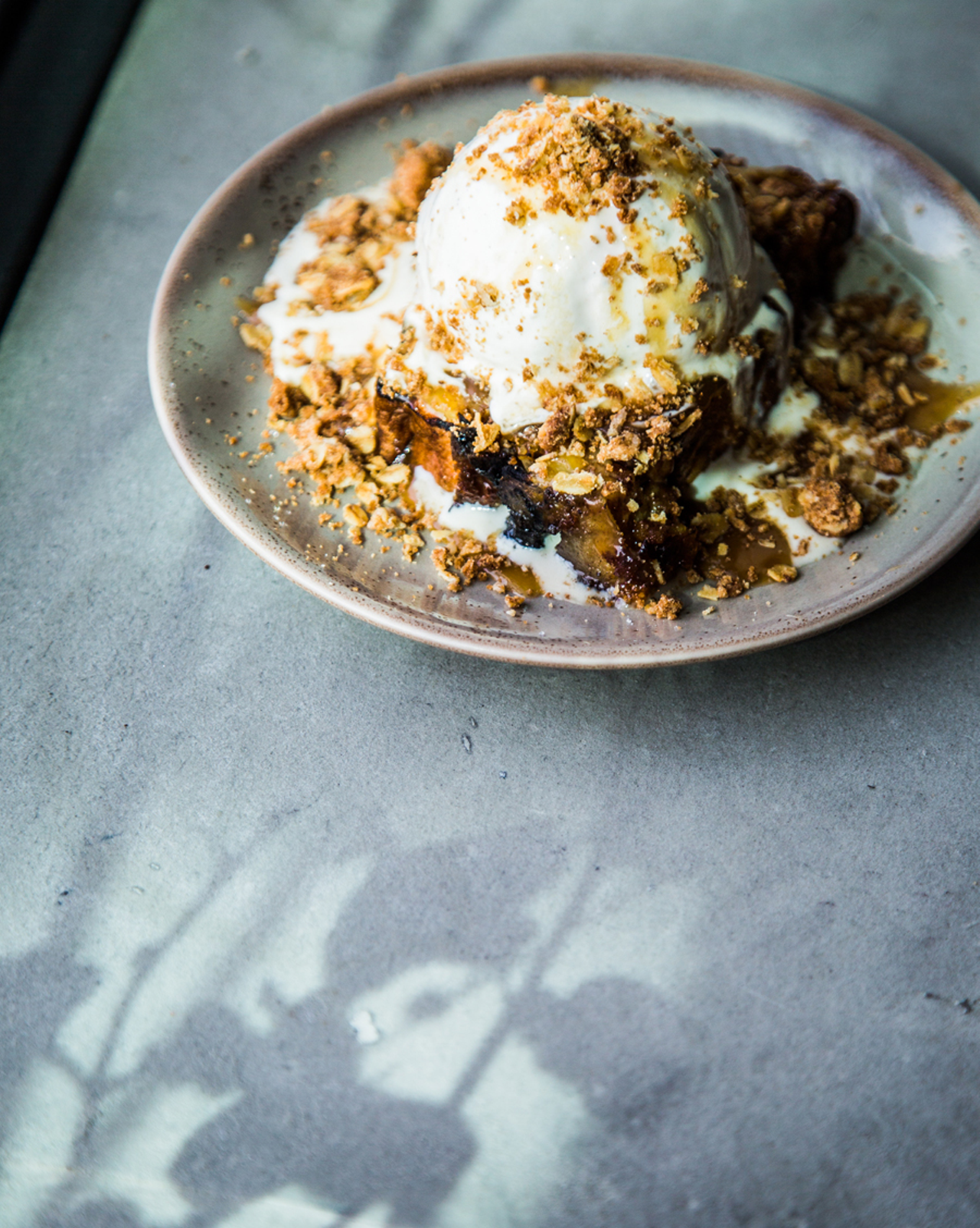