Despite anxiety following the riot at the U.S. Capitol Jan. 6 and in the midst of massive law enforcement presence and boarded up windows, a protest at the Ohio State House on Sunday, Jan. 17, was relatively small and calm. Most attendees were not there to support embattled President Donald Trump. Instead, they came to air their own political ideologies — from calls for racial justice to libertarian beliefs. Kathy Sherman, among the first protesters to arrive at the capitol and set up shop, was there with her son and a friend for Trump, however. The native of Columbus' east side said she had never attended a protest before, but echoed false statements by Trump about election fraud as her reason for speaking out. "It's my first demonstration ever, but because of what is happening, this is our time," she said. "I believe the election had some serious problems." Sherman decried the violence at the U.S. Capitol earlier this month, but expressed doubt about whether conservative Trump supporters were actually to blame. U.S. authorities have arrested and charged dozens of vocal Trump supporters in relation to the riot. Other pro-Trump supporters arrived later, but their numbers were small. One man from elsewhere in Ohio bearing a sign supporting Trump said he came because he did not trust the results of the election. He said he would accept Joe Biden as president, however. Others came to push back against Trump, or to advocate for racial justice, especially around the recent police killings of unarmed Black men in Columbus. Eddie Moncrief sat in a wheelchair near an entrance to the Ohio capitol grounds with a Black Lives Matter flag. He said he came to protest the deaths of unarmed Black men at the hands of police and expressed no fear as he pointed to roughly two-dozen heavily armed men assembling across the street in a parking lot. "God will protect me," he said. Those protesters, bearing assault rifles and wearing tactical gear, marched on the capitol building around noon after chatting with mounted Columbus Police officers and Franklin County Sheriff's deputies. They identified themselves as members of a group called the Ohio Boogaloo Bois, though other armed protesters who came later claimed membership in other informal groups or declined to state their affiliation. The Boogaloo movement, birthed in libertarian-leaning online forums, goes back several years and is often associated with calls for a second civil war. Henry Locke, an organizer with the group, says it does not support outgoing President Donald Trump, nor does it support his successor President-elect Joe Biden. Instead, the group is focused on liberty, supporting gun rights but also groups like Black Lives Matter. Locke denied the group has any affiliation with the Proud Boys, another group that has vocally supported Trump and that has voiced "western chauvinist" and white supremacist beliefs. "You have rights as a person that cannot be affected by the government," Locke told the crowd. "Those rights have been affected en masse. We're here to peacefully let it be known that we are for the people. We're not a pro-Trump group. We're not a Biden group. We are completely politically unaligned." Locke said his group's march had been in the works for months and is not related to the Jan. 6 rally in Washington, D.C. in which armed Trump supporters stormed the U.S. Capitol, killing and injuring law enforcement. As the day wore on, tensions ebbed and flowed. An activist with a trans rights flag debated with a man yelling through a bullhorn about Info Wars, the right-wing conspiracy theory site. At times, racial justice activists outnumbered Trump supporters, with a few shouting down reporters trying to interview the latter. Maurice Carpenter, wearing a Black Lives Matter mask, said it is time to move on. "Trump lost, get over it. We protested all summer to get him out of office. It's done. We're here to take care of other business that needs to be taken care of." Tensions will likely remain high, however, at least until after Biden's inauguration Jan. 20. Ohio Gov. Mike DeWine has ordered all government buildings closed in Columbus through that day.
Photos by Nick Swartsell
Scroll down to view images 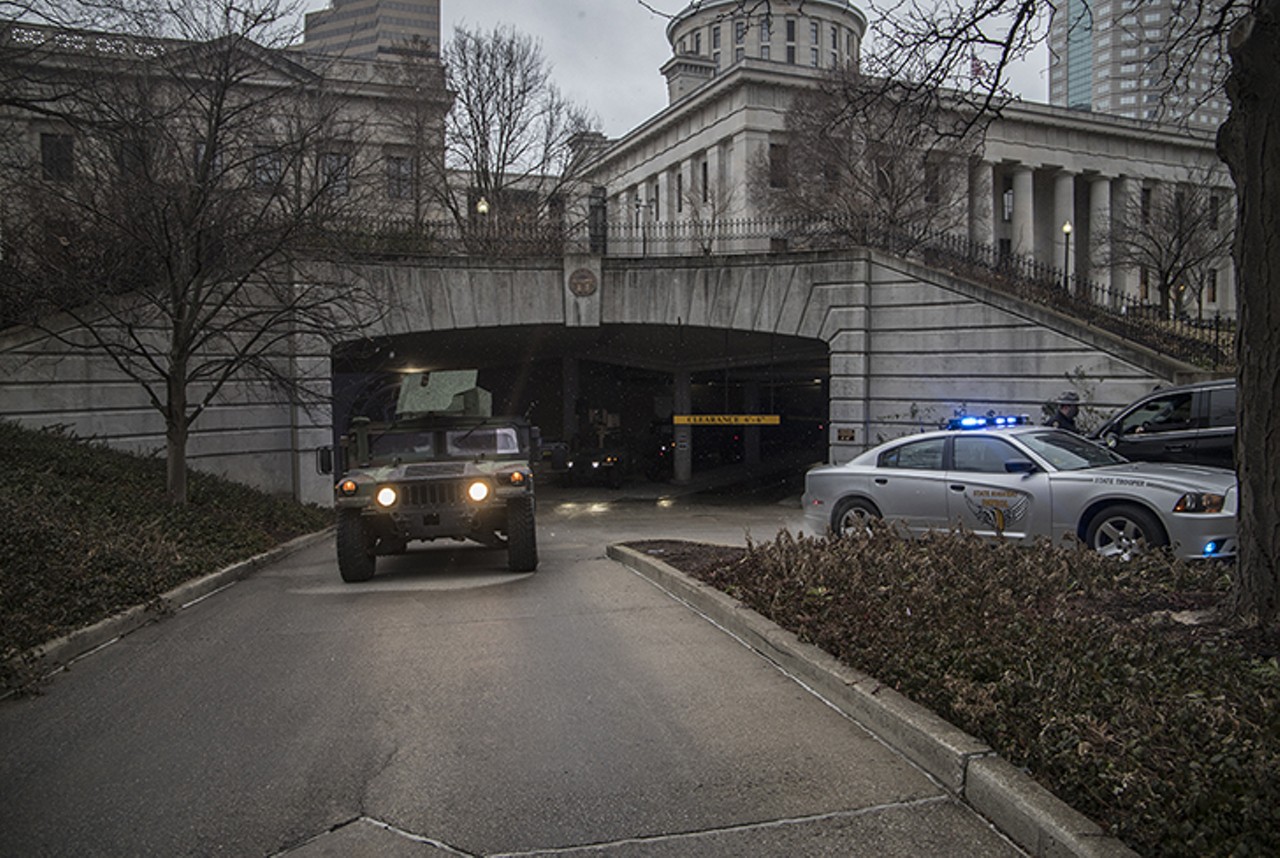 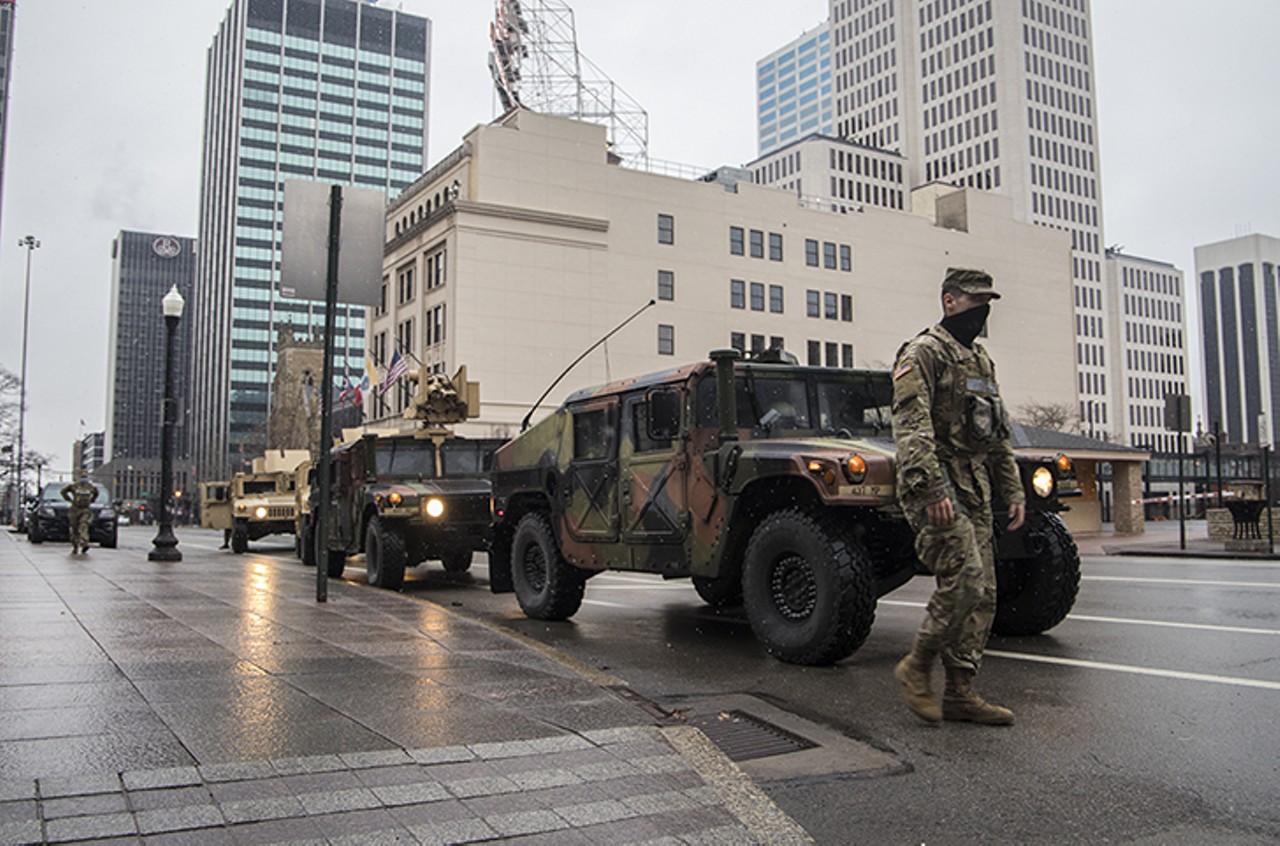 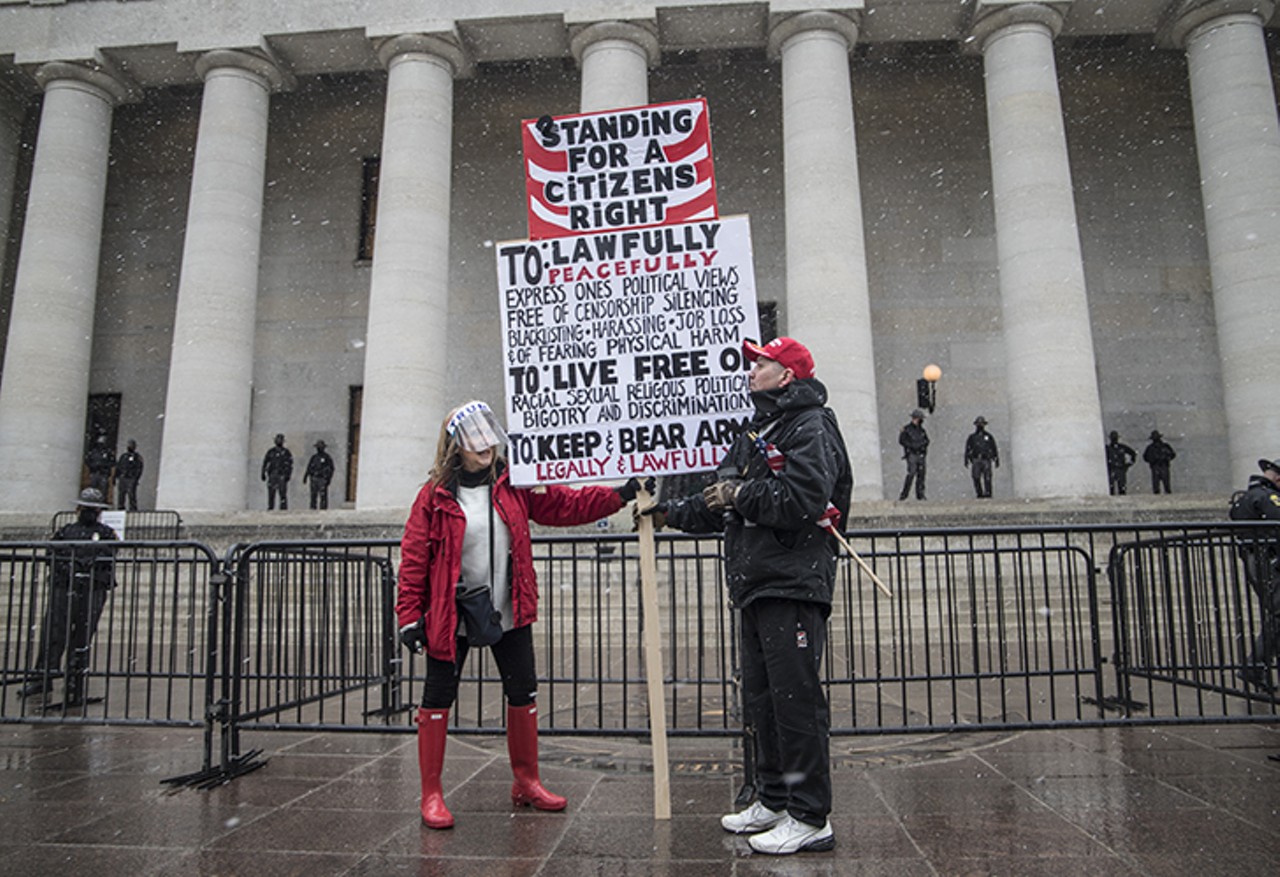 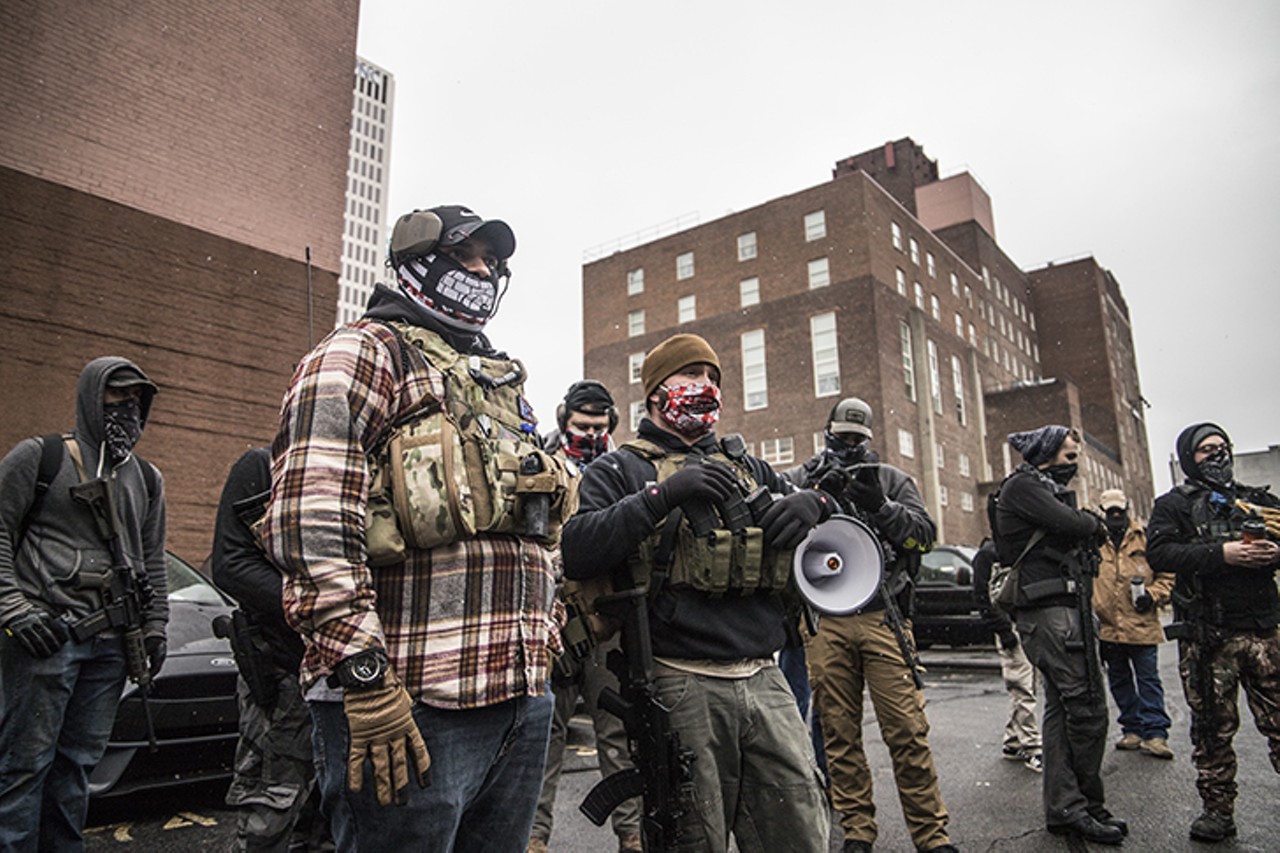 Nick Swartsell
A group calling themselves the Ohio Boogaloo Bois staged a small march to the Ohio State House Jan. 17. Organizer Henry Locke, center, says the group planned the event prior to the riot at the U.S. Capitol Jan. 6. 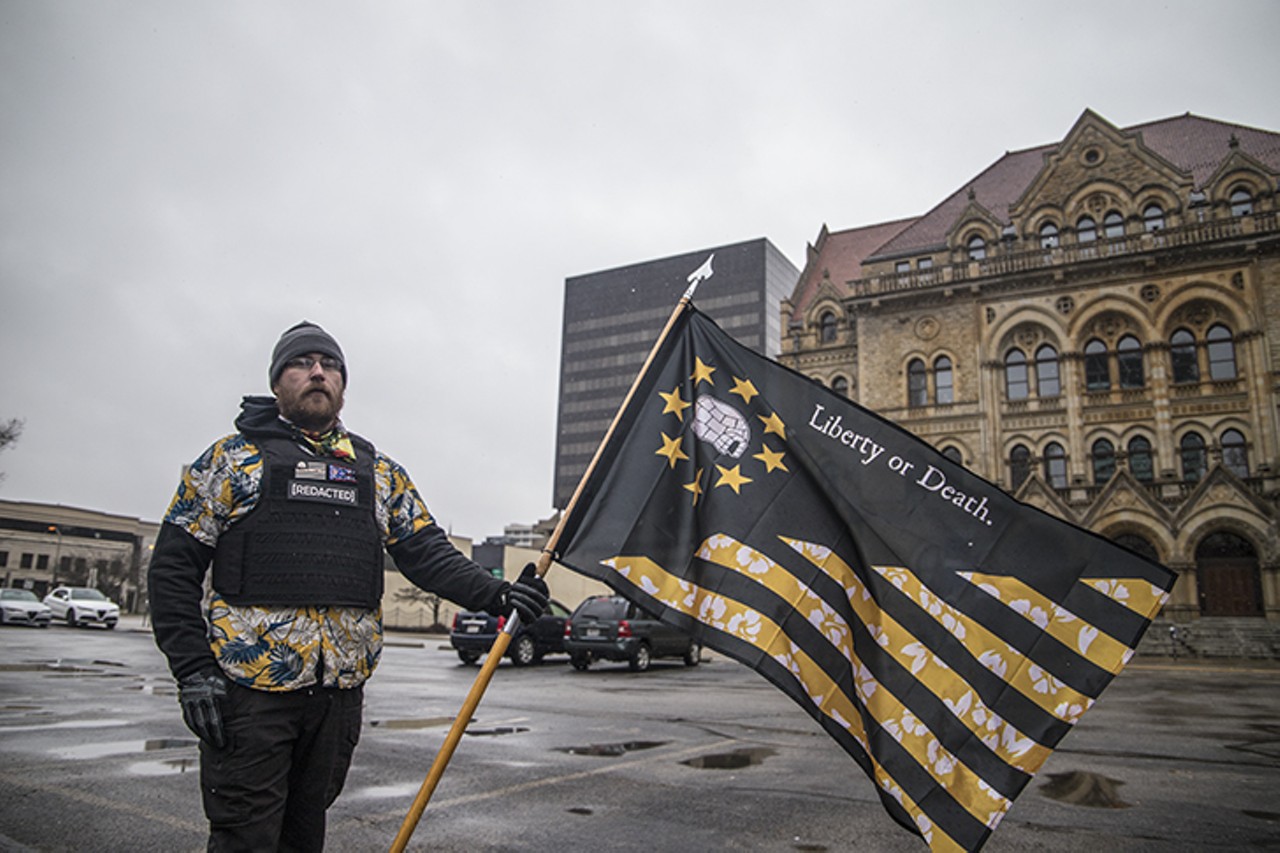 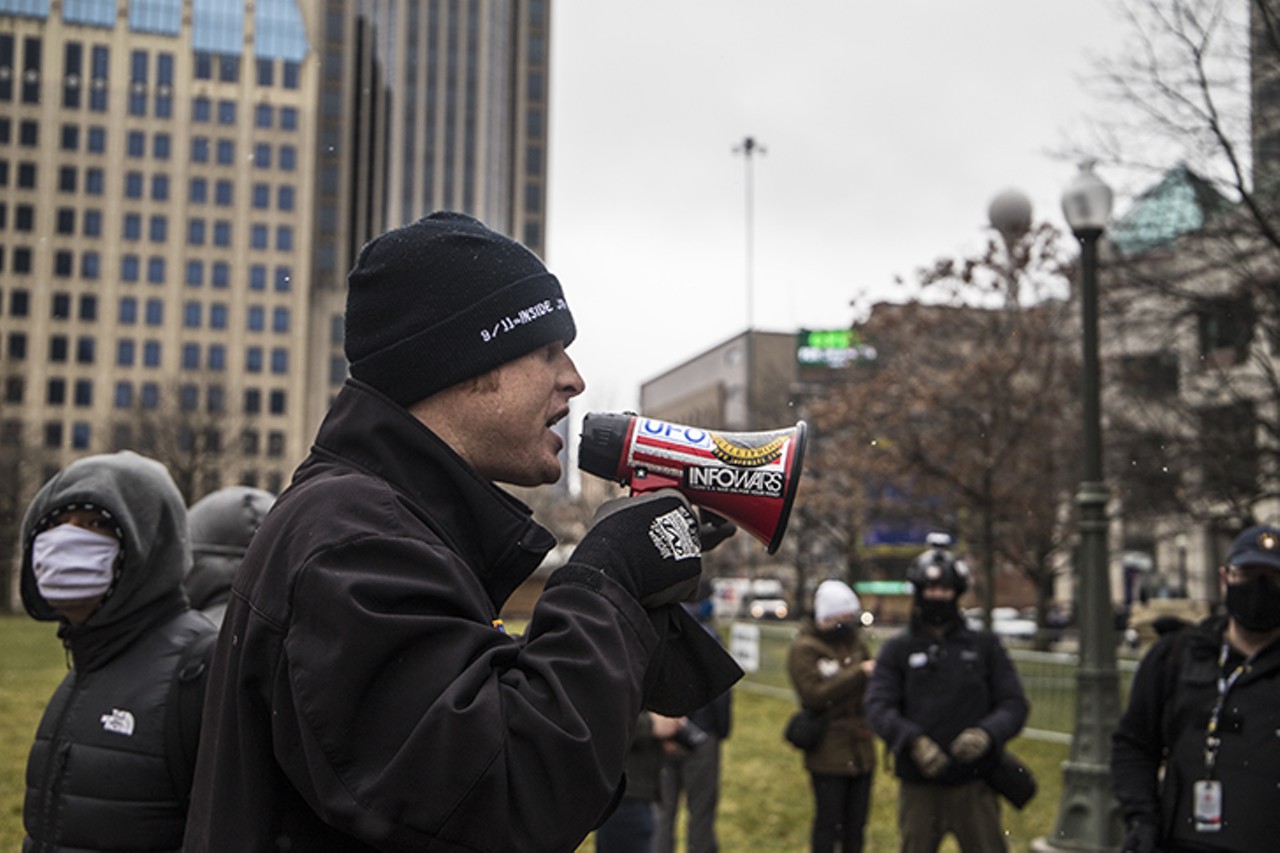 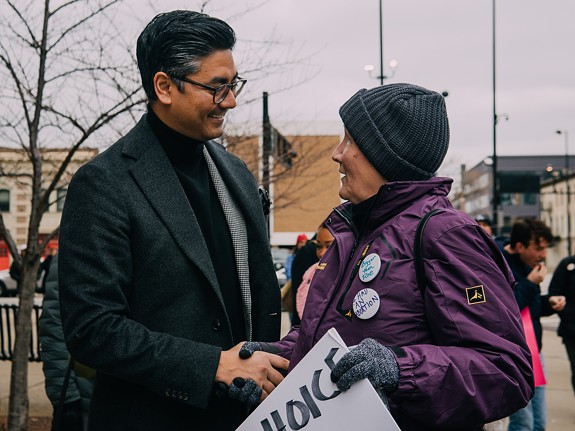 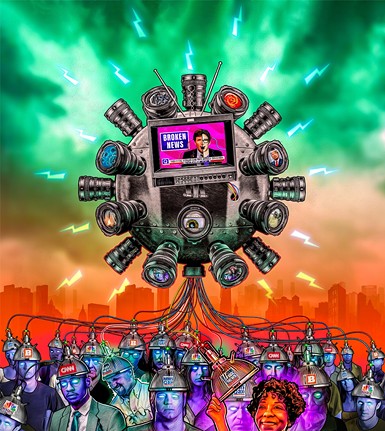 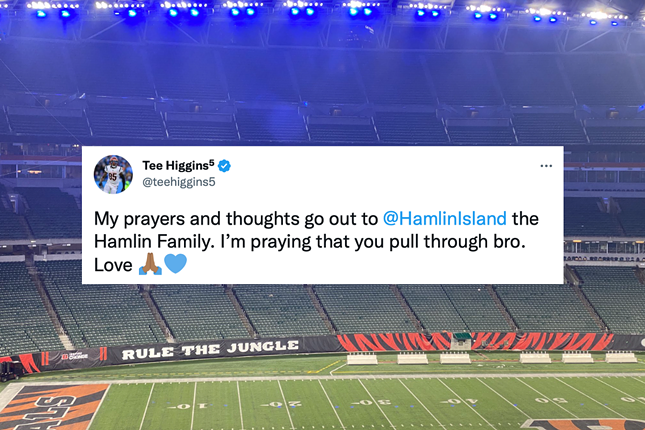 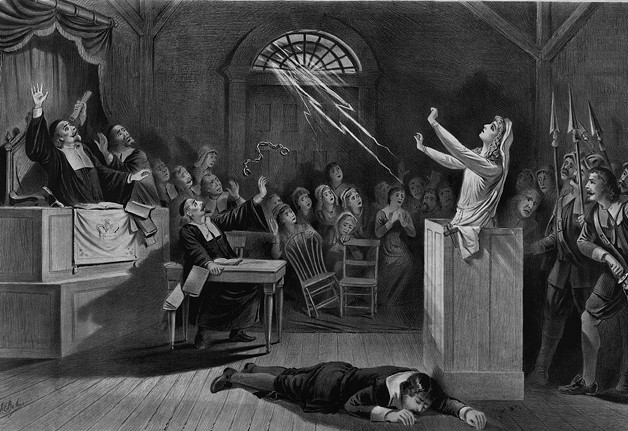 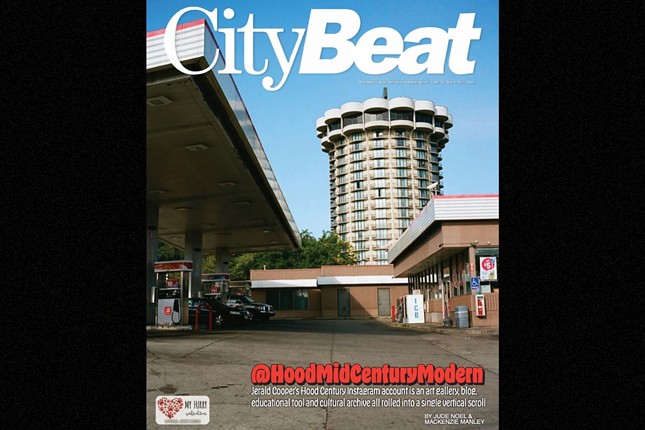