Ice ball mania seemed to start in a shop in Northern Kentucky in 1919. 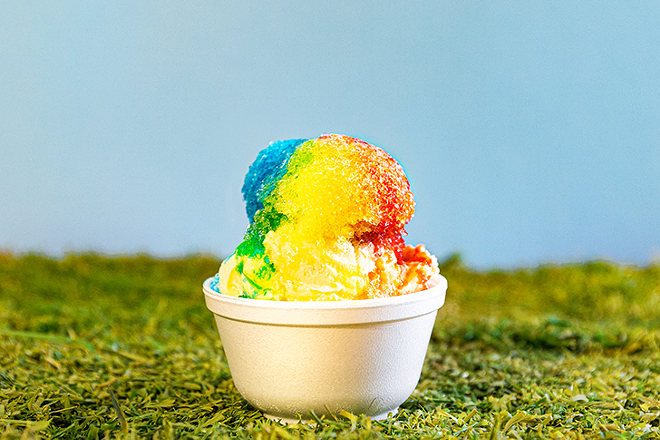 As summer approaches, a seasonal favorite is making its way back to Northern Kentucky sweet shops — ice balls.

A combination of finely ground ice with rich, flavored syrup generously poured on top, this dessert has become a seasonal staple in Northern Kentucky. Local food etymologist and historian Dann Woellert writes on his blog that Ann Wolburn opened Ann’s Iceball in 1919 behind the former Green Derby restaurant in Newport.

In the 1940s, Wolburn moved her stand to Ninth and Orchard streets. She seemingly was the push behind ice ball-mania within the region.

Her legacy continues at places like Schneider’s Sweet Shop in Bellevue and Sweet Tooth Candies in Newport, where you can pair your favorite flavored ice with smooth ice cream to further enhance the experience.

These popular, seasonal desserts returned to Sweet Tooth on April 7, and thousands of customers responded with excitement to the joyous announcement on social media.

“We are actually extending our hours to 8 p.m. to accommodate all of our ice ball fans,” says Zac Gill, owner of the candy shop.

Gill says the irresistible syrups poured over each ice ball are homemade, and the team’s unique way of cutting their ice elevates the sweet treat even further. “If you haven’t ever tried one, we suggest getting a Nectar Ice Ball with ice cream,” says Gill. “It may just change your life.”

Sweet Tooth opened in 1972 and offers homemade chocolates, candy, and ice cream. In addition to its famous seasonal crowd-pleaser, the shop also is known for pecan turtles and opera creams.

Nearby in Bellevue, Schneider’s Sweet Shop has been selling ice balls since the 1940s, says Jack Schneider, whose father Robert founded the shop in 1939.

Like Sweet Tooth, Schneider’s sells the famous, tri- state-area opera cream chocolates and also has a special way of preparing the ice for ice balls. Schnider purifies the water to ensure the best tasting ice and freezes it at the shop in five-gallon buckets to form ice blocks.

“It doesn’t have to be with ice cream,” Schnider explains. “An actual ice ball is ice with syrup in it. It’s not shaved ice. Shaved ice is super fine, and when you put the syrup on it, it starts to melt immediately. Ours is really fine ground ice. We use the old-fashioned ice ball grinders.”

Schneider’s sells ice balls from the day after Easter until Halloween, and the shop goes through around 200 pounds of ice per day in the heat of summer,. “Usually when you come here in the summertime, the line is around the corner,” says Schneider. “It’s lined up the sidewalk. What makes our [ice balls] better, in my opinion, is we make the syrups, we make the ice, and we make the ice cream.”

Along with Schneider’s fine-tuned method of preparing the ice, he has also perfected all 18 syrups, with cherry being the fan favorite. He has been making each flavor to taste for the past 40 years.

Find ice balls and other desserts from Sweet Tooth Candies at sweettoothchocolates.com and Schneider’s Sweet Shop at schneiderscandies.com.