A Cheese Shop For Every Neighborhood 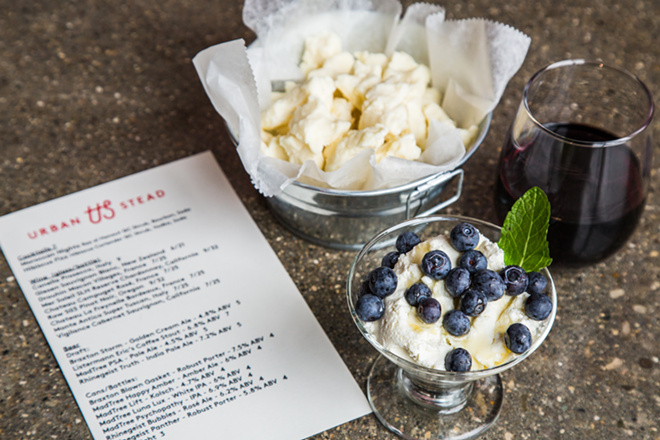 The food scene is ever shifting and trendsetters come and go, but one popular item isn’t going away anytime soon: cheese. Stacks of cheese wheels with lopsided edges and intricately laced rinds stink up Pinterest on wedding boards for cake alternatives. Buzzfeed’s “Tasty” videos show hands pulling apart bread held together by gooey strands of the stuff. It’s not just a favorite among Millennials — cheese consumption is up worldwide, and Cincinnati hasn’t disappointed in keeping up with demand.

Cecilia Garmendia, a Spanish cell biologist and co-owner of Lamp Post Cheese with her husband Ryan Tasseff, says she’s seen an uptick in cheese shops even in Madrid, where she’s from.

“I moved to Seattle in 2007 to work as a scientist and missed cheese a lot,” she says. “Ryan said, ‘Why not learn how to make cheese,’ and that’s when we started going to cheese-making classes and making cheese at home. It’s ironic because I have family in Spain that sells cheese, but I had to come to the United States to really be more interested because I missed it so much.”

Eight years after their introduction to the process, the couple moved to Lebanon, Ohio and decided to start Lamp Post Cheese to work on the venture full-time. At first, they rented space at another facility, but last summer they purchased their own building and are working on completing a half-a-million-dollar renovation. When the facility opens, Lamp Post Cheese will not only sell Garmendia’s cheeses, made entirely of local raw milk, but they’ll also carry products from other local artisans, like the “best chocolate milk” that Garmendia has ever had, from Bowersville, Ohio’s Swallow Hill Jersey Dairy — the farm that also supplies Lamp Post’s milk.

“I cannot emphasize enough how important the quality of the milk is for the flavor of the cheese,” Garmendia says. “With good milk, you can make bad cheese, but with bad milk, you cannot make good cheese.”

Lamp Post Cheese isn’t the only game in town making good cheese from good milk. Scott Robbins and Andrea Siefring-Robbins recently opened Urban Stead Cheese on Woodburn Avenue in the East Walnut Hills/Evanston area. With the motto, “Cheddar for the Better,” Robbins and Siefring-Robbins wanted their cheese-making business to be an integral part of the Cincinnati economy, hiring locals, using the best small-scale Ohio-farmed dairy and educating natives on the overall process and integrity of the business.

The slogan isn’t just a funny pun, either. Cheddar will be a big part of Urban Stead’s offerings after it’s been properly aged. Until then, customers can look through the tasting room’s huge windows to check out how the aging process is coming along.

“Cheddar is noticeably different in process than a lot of cheeses,” says Siefring-Robbins, “and a really well-aged cheddar is quite beautiful with little crystals inside.”

On days when Urban Stead is producing cheddar, they’ll remove some of the curds from the process, salt them and sell them in the tasting room. Squeaky against the teeth, creamy and chewy at the same time, with a pungent bite and a lingering aroma, these little flavor bombs go down like popcorn. They’re addictive.

“The same day you make the cheddar, the curds are available and they’re so fresh,” Siefring-Robbins says. “The molds for cheddar are specific — called truckles — and we pack 27 pounds of curd into them.”

While they wait for the rest of their cheese offerings to age, Urban Stead sells its curds in the tasting room, along with charcuterie boards, an assortment of other cheeses, chips and cake made from quark, one of the housemade cheeses similar in taste and texture to cream cheese. Drinks are curated by Robbins and include wine, local beer and specialty cocktails, deliciously mixed with the offerings of another local business: Queen City Shrubs.

Supporting local businesses is an uplifting theme concurrent in many of Cincinnati’s restaurants and dining spots, including new Northside deli Morsel & Nosh, run by Michael Heerkens and his Wisconsin-born husband Mark Dreibelbis. The duo has revitalized a storefront on Hamilton Avenue, adding buttery yellow walls and restored turn-of-the-century detailing. Set to open on or before the start of summer — June 21 — the deli will focus on selling high-quality cheese, charcuterie and Mediterranean food like tabbouleh, hummus, caprese salads and pâté.

The deli will eventually offer cheese-making classes and classes on how to compose a cheese board, as well as cheese pairing classes with beer, bourbon and wine. They’ll even have events where the public can meet with the cheese makers themselves to bring people closer to their food sources.

“We’re going to have a little bit of something for everybody,” says Dreibelbis, and that includes vegetarians and vegans. Heerkens makes a pâté from black lentils and walnuts, as well as a vegetarian mushroom pâté.

“We love to cook, love to entertain. I’ve traveled the world, so I love a bunch of different cuisines,” Heerkens says.

Originally excited by the prospect of an urban fruit farm, Heerkens and Dreibelbis had to rethink their business plan when their proposal with the Hamilton County Land Bank to revive abandoned properties by planting dwarf fruit trees fell through. Undeterred, the couple knew they wanted to stick with the food industry and decided to open a cheese and meat shop. But after they asked their neighbors in Northside what kind of storefront they’d like to see, the duo decided to expand the business model.

“As we started to talking to people in the neighborhood, we were getting feedback (wanting) more places to eat, more sandwich-style stuff,” Heerkens says.

In response, Mosel & Nosh will carry its signature “ampersandwiches,” a nod to the shop’s ampersand logo, with a menu of sandwiches named after the couple’s family and favorite locations. Perhaps, eventually, we’ll find an ampersandwich made even better with the addition of Lamp Post or Urban Stead cheeses.