Tony Milburn and his family transformed Club Venus into The Globe, a slick bar that serves up high-end cocktails. 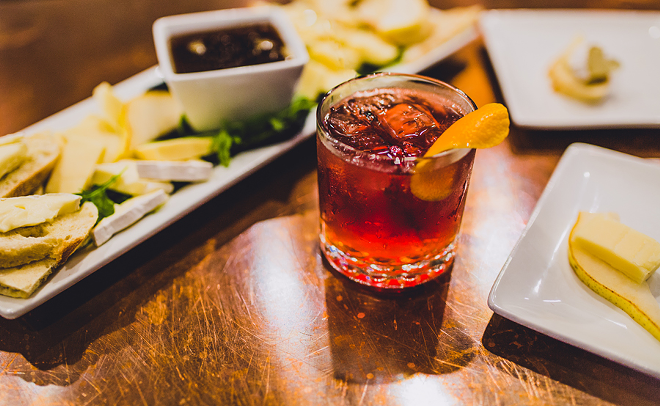 Photo: Hailey Bollinger
The Globe slings high-end cocktails at the former Club Venus.
When my friend told me that in the span of one year a Covington strip club called Club Venus had become The Globe, a slick modern bar serving high-end cocktails, I didn’t believe her. I had to walk into the minimalist and rustic space and see it with my own eyes.

The meticulously clean bar still had that fresh paint smell, thanks to the extensive remodeling done by owner and developer Tony Milburn and his family.

“In nine months, the Milburns completely redid everything,” says bar manager Darren Parr. “It’s amazing to see how they transformed the space but kept the original charm.”

The Globe is cool and industrial — it hits on every modern design aesthetic. The lighting is dim and candles are placed in glass terrariums on marble-topped tables. The dancer’s stage has been replaced by a dip in the bar, where a man sat strumming an acoustic guitar and singing songs about his grandma’s dumpling recipe during my visit (it’s still Kentucky after all). Gruff bouncers have been replaced by smiling bartenders who answered all of my questions about what’s in each cocktail. The Globe even has a drink named after the club’s former iteration: the Venus ($8), a syrupy sweet sparkling cocktail with tart orange flavor.

The drink menu, with nods to local favorites like bourbon sours and on-trend additions like mezcal cocktails, is Parr’s creation.

“The cocktail menu is my baby,” he says with a smile.

Each unique drink is inspired by Prohibition-era classics and has been taste-tested by the staff.

And while The Globe’s kitchen is small, it is mighty, offering light bites like flatbreads and savory creations like a classic Cuban sandwich. While I was there, I sampled the cheese plate, which had four different kinds of cheese that were gone in about four seconds. My favorites were the smoked bleu cheese and the brie, all served with warm bread and honey.

Out of the cocktails I tried — The Venus, The Globe Negroni ($9), Amore Del Diablo ($9) and Cherry Bourbon Sour ($9) — it’s hard to pick a favorite. While I’m usually one to skip the gin, The Globe Negroni’s mix of Hendrick’s gin with grapefruit was smooth and sinfully sip-worthy. And the Cherry Bourbon Sour tasted hardly alcoholic. Served with an egg white, cherry, lemon and Bulleit bourbon, it’s a troublemaker in a cocktail glass. I finished it before realizing I’d even been drinking.

The Amore Del Diablo balanced subdued habañero bitters with mezcal, grapefruit and orange juice. The drink has a dark, smoky coal flavor with an aftertaste of black pepper. My friends passed the Amore Del Diablo around the table, each making the same shocked but intrigued face after taking a sip — and then another and another.

When the Milburn family purchased Club Venus in the hopes of transforming the gentleman’s club into a cocktail bar and community space, they couldn’t think of a name for the new joint. It wasn’t until they saw an old photo of their great-great-grandfather A.L. Andrews on his boat, the Globe — which had a false bottom to conceal bottles of liquor to transport across the water to a party — that they knew they had to name the bar after the boat and the family tradition of bringing the party wherever they go. As you sip at the bar, Andrews’ photograph looks down.

In less than a year, the Milburns transformed a club that previously offered “shower shows” into a top-notch cocktail bar that rivals any of the luxury lounges of downtown Cincinnati, all the while still paying homage to family stories. And that’s no easy feat. The cocktails lived up to how fancy I felt lounging on the gray industrial sofa in the bar’s immaculately designed interior — its offerings are as delicious as the location is beautiful.