A Brief History of Fish Logs 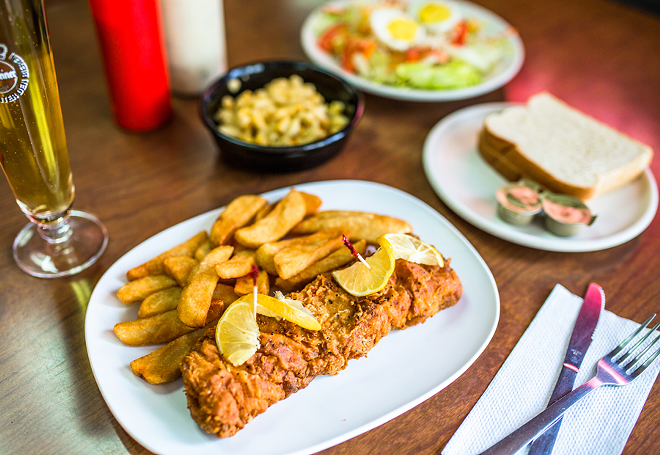 Photo: Hailey Bollinger
Old Timber Inn proprietor Elmer Ferguson makes each order of fish logs — a thick slice of fried cold-water Atlantic cod — from scratch.
If you’ve ever driven on Spring Grove Avenue on your way to Northside, you know the Old Timber Inn. Or should I say: the fish logs place.

Right. That place. The giant blue-gray building featuring a mural of a happy couple and waitress painted on the side — the one whose sign is perpetually advertising fish logs.

When I drove by, I would wonder out loud with my friends what a fish log might be. Was it a giant fish stick? Some sort of vegan alternative to fish, made out of tree bark?

Since I started spending time in Northside, I heard more and more rumors about the Old Timber Inn, mythologizing the place into an urban legend. I’ll admit: I was both nervous and excited to finally get to the bottom of what may be one of the most unique eateries in Cincinnati.

Walking in, I was greeted by Elmer Ferguson, the owner of the Old Timber Inn. He was sitting at his bar, watching Fox News. I think I was more surprised to see him than he was to see me. “Well, you want to eat?” he asked me. And that was that.

He didn’t have to give me a menu — Elmer (who’s on a first-name basis with every guest who walks in the joint) knew why I was there, of course. Any newcomer off the street was obviously in for the fish logs. Most of the diners who trickled in and out that evening were old buddies of Elmer’s, regulars that plopped down at the bar and just ordered water. “I’m on a diet, no alcohol,” one of them told me as we sat together, watching Trump give a speech about Russia. “Thirty pounds in 30 days.”

“I get so busy around Lent; everyone’s eating fish. This place will be full,” Elmer said as he prepared a vodka soda for my boyfriend and a water with two lemons for myself (his own personal touch). “Don’t get too hip on that,” he said to my boyfriend as he placed the vodka soda down. “That’s mostly vodka.”

We ordered a whole fish log ($13.95) to share, though there’s always an option to order a half fish log ($9.25) if you aren’t feeling up to what might be the best deal around. For just $13.95, the whole fish log is served with your choice of classic sides like coleslaw, macaroni and cheese or mashed potatoes and bread and butter. Elmer recommended we try the macaroni and the hot slaw, his specialty Southern treat of vinegary shredded cabbage served with crispy bacon bits.

Because Elmer makes everything fresh himself, and was the only one there that night, it took a minute for us to get our food. “We’re not the fastest in the country, but we’re the best. Well, the best on the block at least,” Elmer said as he popped out to check on us while the fish cooked. You can hear it frying in the kitchen if you sit at the bar’s high top.

It’s worth the wait. The fish log is a thick slice of savory cold-water Atlantic cod, fried to a perfect crisp and served with a sliced lemon. “It’s not Mill Creek fish or sewer trout, like some might say,” Elmer joked.

Even splitting the whole fish log, I could only get through half of my half. I may have been too distracted by the tartar sauce, Elmer’s own recipe that is so thick it’s hard to squeeze out of the bottle. It is, no joke, the best tartar sauce I have ever had. He told me that people have been asking him for years to sell it in take-home jars, but he hasn’t yet.

“Maybe I will soon,” Elmer said to me with a twinkle in his eye.

It was then that I asked him the million-dollar question: Why fish logs? Without a word, he passed me the menu to the Old Timber Inn. The first page is a cheeky “brief history of the fish log.” It reads: “The earliest settlers of the New World would often hear stories from the indigenous peoples making reference to strange creatures inhabiting the wilderness. One such account depicted a creature that resembled a large fishlike animal with an extended thorax covered with a type of ‘bark’ where one would typically find scales. These native tribes referred to the creature as ‘yoopapwa’ or ‘fish log.’ ”

The menu goes on to credit lumberjacks finding this rare creature and, of course, later harvesting the creature as food. “Restaurants such as Old Timber Inn of Cincinnati, Ohio have helped bring the fish log to the attention of the general public,” it reads.

The menu reflects Elmer’s attitude. He laughed and joked with us all night, showing us around the old building and explaining the history. He pointed out the authenticated 1870s photograph of American outlaw Jesse James enjoying a beer in the Old Timber Inn.

He told me of the “Northside tough guys” who hung around the bar in the ’80s, showing us the very door he used to throw them out through at the end of the night if they got a little too frisky by the pool table. Elmer even told us about his plans to open up the second dining room, which has long been closed off to the public, and start renting out the hotel rooms above the restaurant again. Elmer himself lives upstairs in one of the dozens of rooms, all redone by Elmer himself.

Before I realized it, two hours had gone by and it was dark outside. When I left Elmer, now in his 80s, his regulars were playing the virtual lotto games at the bar and chatting away with him, as they have for the past almost 40 years since Elmer bought the building in 1979.

If you’re like me and have always wondered what lay inside that mystical blue-gray building, go in, if not for the fish logs or the best tartar sauce in town, then for Elmer himself.

When so many chain restaurants and Over-the-Rhine eateries are trying to capture a feeling of an authentic dining experience, with comfy but courant food made by real people, go get some soul food handmade from someone who can tell you the entire story of Cincinnati, fish logs and all.