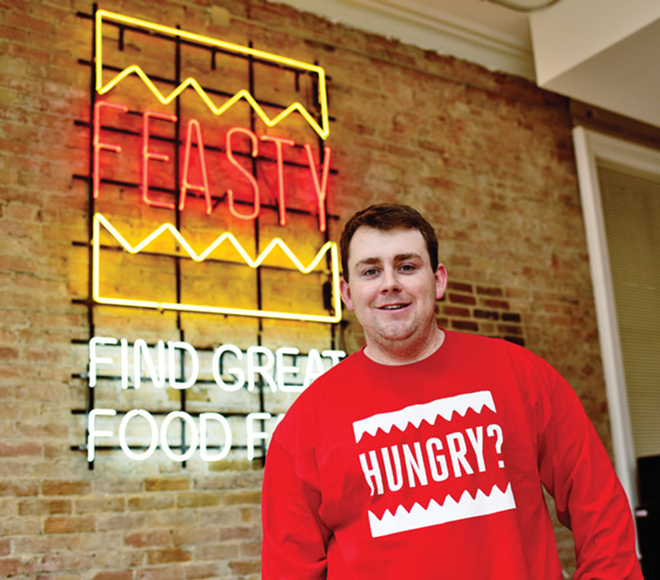 hen a hungry group of friends gets together to go out to eat, the scenario often plays out something like this: “Let’s go get some food.” “OK! Where?”It’s at that moment when you say you don’t care — any restaurant sounds good — but you don’t like any of the options your friends suggest. Maybe you’re craving something very specific that no one else is in the mood for. With all the discussion about where to go, sometimes you’re left wondering if you’re actually going to eat at all.

New Cincinnati-based dining app Feasty was born from a situation like this — the idea spawned from the brain of founder and managing partner Anthony Breen when he and his fiancée were having a hard time figuring out where they wanted to eat. Feasty offers users exclusive short-term deals at area restaurants and incentivizes customers in real time.

“We believe we’re revolutionizing the way people make their dining decisions,” Breen says. “We’re trying to customize the experience to every individual person.”

App users can choose at which restaurants they “feast” the most and scroll through a host of deals. Current featured restaurants include Taste of Belgium, Tom+Chee, Lachey’s, Off the Vine, Gomez Salsa, Revolution Rotisserie, Betta’s Italian Oven, Nation, Kaze, Dewey’s, The St. Clair and others. After selecting the deals, users must tap the screen when they arrive at the restaurant location in order to activate the deal and receive a unique promo code.

While the deal is redeemed through the code, there is no limit to the number of times one person can activate the deal for a new code. The number of different deals users can get through the app is also unlimited. You can get a turtle, chips and salsa from Gomez Salsa for $8, then hop on over to Taste of Belgium for a free waffle and sip on five local craft cans for $15 at Lachey’s, if you can stomach it all.

Users can even get a head start with an in-app button that allows them to look up directions or request an Uber, or view upcoming deals and set a reminder for when they start. Also, don’t take too long getting ready or sending out invites for friends to join you (yes, you can also do that through the app) — a clock ticking down lets you know exactly when the deal expires.

Feasty is one of four apps participating in Cincinnati-based OCEAN Accelerator’s 2016 class, and it isn’t Breen’s first creation. With a degree in finance and entrepreneurial studies from Xavier University, Breen’s desire to create apps stems from his drive to solve problems and recognize the need for products in underrepresented markets. His other apps include My Healthy Tale, designed to educate children with hemophilia or Type I diabetes about their illnesses through learning games, and Change for Good, a web app where patients can set weekly health goals to lead healthier lifestyles.

“With Feasty, I fell in love with the problem of restaurants not having enough people come to their restaurant.”

Each time a user eats at a participating restaurant, Feasty earns a portion of the profits from that sale. Restaurants do no pay for their deals to be featured on the app; rather, they pay per each time a customer is incentivized. If the restaurants are successful, so is Feasty, so the team behind the app — which includes Katlyn Klare, director of social media and content marketing, and Lizzie Lohse, director of restaurant operations — is dedicated to seeing the featured restaurants succeed.

“I see how hard these restaurant owners work every day, and I see what goes into actually running the restaurant in a day-to-day operation, so being a tool that allows them to get more people to take part in that experience is rewarding,” Breen says. “At Feasty, we’re not about trying to drive people via deals; we’re about trying to get people to experience the awesome brands that are in this city.”

Feasty’s exclusive deals give foodies a fun way to try out restaurants where they have never eaten before. At the same time, it also helps users stay within their budgets, as most deals list the cost of the special. The Feasty team plans to branch out to nearby cities such as Columbus by the end of the year, and one of Breen’s long-term goals is to expand the app across the U.S.

Although the app has only been out for two months, it has already driven business to area restaurants, and the number of users is growing quickly, Breen says.

Revolution Rotisserie owner Nick Pesola says he sees customers use Feasty deals most often during lunch. The Over-the-Rhine restaurant does not use advertisements or coupons, but Pesola says he likes Feasty because it creates win-win situations for everyone — the customers, restaurants and app.

“I feel like Feasty is a little more organic and authentic with the way they approach situations,” Pesola says, “and they have a more personal connection with the restaurant coming up with deals that are desirable to everyone.”

Especially those users waiting with their phone in hand, hungry and ready to eat.