The following bars and restaurants are upping the ante with their extreme bloodys.

The bloody mary has a couple of origin stories. It was either invented in 1921 at Harry’s New York Bar in Paris (and later perfected by the same bartender in the 1930s at the St. Regis Hotel in Manhattan) or invented by Vaudeville actor and comedian George Jessel as a basic blend of vodka and tomato juice after an all-night drinking binge.

But the name? No one’s really sure… and it really doesn’t matter. A bloody by any name can still help a hangover — especially if it comes with a snackable garnish. The following bars and restaurants are upping the ante with their extreme bloodys, combining food and booze in creative and frequently extravagant ways. If you thought adding a strip of bacon to your beverage was wild, these drinks will make you think again. 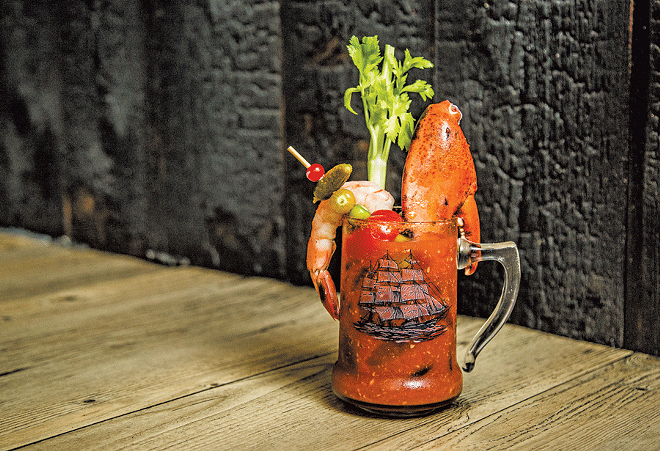 The Details: A balanced cocktail with spice, acidity and sweetness. The housemade bloody mix consists of tomato juice, horseradish, pickle and olive juice, lemon, lime, four different hot sauces, salt, pepper, sugar, cayenne, garlic and a touch of umami with Old Bay seasoning and Worcestershire sauce. The garnish showcases the restaurant’s fresh seafood, with the option to add a lobster claw, shrimp or an oyster for an upcharge.

The Dish: “The Longshoreman is our original cocktail,” says chef and owner Derek Dos Anjos. “It has been on our cocktail list since day one and won’t be going anywhere. Bloody marys perfectly complement seafood with the acidity and brightness. The name is in homage to the Bloody Thursday of 1934, where longshoremen went on strike all along the Pacific Coast.” The Drink: The Sunday Bloody Mary

The Details: The Crazy Fox might have the craziest bloody mary in town with toppings ranging from cinnamon rolls and sliders to sushi and falafel. The mix for the Sunday special is made from scratch each week with San Marzano and fire-roasted tomatoes, roasted red pepper, a “ridiculously large amount” of garlic and sweet onions, plus secret spices. Horseradish, hot sauce and Worcestershire sauce are added based on personal preference. For garnish, bloody mary mastermind and bartender Brandon Moore says, “During football season, when we open earlier for the 1 o'clock games, I theme the topping based on the opposing team — (last week) we played the Bills so the garnish was a pulled Buffalo chicken slider — and then the rest of the year the toppings are either based on what's going on around the neighborhood/city/holiday season or just an idea that pops into my head. Most of time, people can expect some sort of sandwich because A) sandwiches are bae and B) it's the easiest mode of transportation from drink to mouth.”

The Dish: “Fun fact about my bloody — if it doesn't have a piece of kale, it ain't mine,” says Moore. “I started adding kale as a backdrop to the rest of the drink a couple years back, and it's kind of become my signature. As for the origin story, I was working a particularly slow day shift and when a regular came in asking for a bloody. I put every last bit of pickled veggie we had on it, topped it with a Grippo’s chip, and the rest is history.”

The Drink: The Ultimate Mary

The Details: Served only during Sunday brunch, the Incline’s Ultimate Mary goes big. The mix is made a couple times a week, so there are two options — regular and spicy — and both are chunky and full of flavor. The base ingredients for are garlic, horseradish, tomato, Worcestershire sauce, hot sauce, salt, pepper and a few secret ingredients, including housemade pickles. For garnish? There’s bacon, jumbo shrimp, a pickle, an olive, a cherry tomato, celery and housemade crispy onions.

The Dish: “The garnishes and size are both unique to Sundays for us,” says bar manager Kevin Geers. “Our standard bloody is garnished with lime and olive and served in a 10-ounce glass during the week. On Sunday we go all out. During brunch, we don’t offer any appetizers, due to the changes in the kitchen for a specialized menu. To compensate for that, we serve all bloodys in pint glasses and have the Ultimate as a belly-satisfying option with all the garnishes.” The Details: This mix switches it up by going green. Tito’s vodka is blended with housemade roasted tomatillo bloody mary mix and house-pressed Super Green juice (spinach, pineapple, romaine, kale, parsley, celery), served with a garnish of kale, an olive, a cheese cube, a tomato and celery.

The Dish: “When developing this bloody mary, we wanted to create a signature drink that captured the West Coast, fresh vibe of the restaurant,” says Tony Dornbusch, food and beverage director of the Thunderdome Restaurant Group. “The entire Maplewood cocktail and mimosa program was inspired by the in-house cold-pressed juices, so we knew that our signature bloody mary had to include one of our juices. The Super Green adds a bit of earthiness to balance the tart and tangy tomatillo.” The Details: Co-owner and chef Jon Weiner’s secret homemade bloody mix (made fresh every Sunday) is infused with Tito’s vodka and citrus juices and then topped with an obscene smörgåsbord of meat: a house breakfast sausage slider, American hickory bacon, a house-smoked Amish wing and a piece of celery for good measure. The mix is balanced — not spicy or salty — but there are hot sauces available if you want to kick it up a notch.

The Dish: “We noticed a lot our clientele comes in visibly hungover for Sunday bunch,” says co-owner Stuart MacKenzie, “so Dr. Jon thought the best hangover cure would be a stiff bloody mary with a homemade mix, bacon, a smoked wing and a warm breakfast sandwich slider. Fun fact: The slider is served on a special Sixteen Bricks bun they make especially for us.”