In addition to more than 50 artisan cheeses available at a time, The Rhined also carries wine, canned and bottled beer and four taps for in-house pours, all specifically selected to complement the cheese. 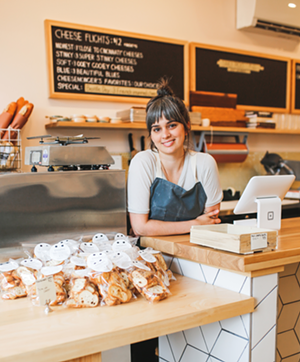 Cheese is having a moment. It feels silly to say that about a product that’s arguably been around since humans began cohabitating with other milk-producing mammals but in the age of the internet, Buzzfeed’s Tasty videos, slow-mo cheese-goo food porn and the millennial-favorite cheese board, cheese really and truly is a star. That’s why it’s refreshing to walk into a shop (shoppe?) that leaves all the trends behind and charms guests with its back-to-basics, excellent foodstuffs — cheeses you just won’t find at your local grocery store. The Rhined is your new Shop Around the Corner for that creamy, buttery goodness we love to slice/carve/spread/shred on everything.

Stephanie Webster, who co-owns the business with her husband Dave, is a former high school biology teacher turned cheesemonger. After visiting cheese shops on various vacations in cities like New York, Denver and Portland, Webster started tinkering with the idea of opening her own. Eventually she turned that dream into reality, quitting teaching and launching The Rhined as a traveling pop-up concept in 2016, doing cheese tastings at venues like Rhinegeist and Findlay Market while renovating a permanent storefront at 1737 Elm St. in Over-the-Rhine.

“I started getting milk from a farm in Hillsboro — really good, high-quality milk — and started making some cheese at home, playing around with the chemistry of milk and cultures and pHs and nerdy stuff,” she says. Although Webster won’t be supplying any of her own handcrafted cheeses at The Rhined, she’s tasted and approved each cheese the shop carries. In total, there will be 50 to 60 cheeses available at a time.

“I had a few people helping me that are experts and we have tasted a ton,” she says.

Webster’s focus is on local and regional flavors. “It’s hard to stay local with cheese,” she says.

Unlike with vegetables, fermentables, jams and other hot selling points at markets, cheese requires a massive amount of work to produce. One has to be both farmer and chef, which is why the distance permissible for “local” cheese spans about 150 miles.

“We’ll have a high concentration (of cheese) from our area, Kentucky, Tennessee, Indiana, Vermont and California,” she says. “Eighty percent of our cheeses are domestic, so we’re focusing on American made.”

If you want to find Ohio’s offerings in The Rhined’s cheese case (located right inside the front door), imagine placing a map of the United States over the top of the glass; that’s how Webster organizes the product.

Webster learned about cheesemaking and cheese selling from a culinary internship in Portland with famed cheese whiz Steve Jones. She stayed at an Airbnb in the city for a month and worked at Jones’ store Cheese Bar to glean any and all information she could from his successful business.

“All the cheese makers love this guy,” she says. “He’s just really good at what he does and he’s been doing it for a really long time. He totally let me come out and hang out at his business and work behind the counter and learn how to do everything.”

She brought all that knowledge back to Cincinnati. Although Webster hopes her shop will primarily be a retail business, it does have 11 seats, including a bar, and three very cute menu boards with her signature themed cheese board options. You can add charcuterie to your board if you so choose, although Webster likes to remind that The Rhined is really about the cheese.

Well, the cheese and wine.

“I love wine so (selecting and tasting wines) was definitely an easy part of the job,” Webster says. “We’ll have 30 total wines for purchase, plus we’ll have six wines by the glass, all meant to be super cheese-friendly. If you come in and ask for a new kind of cheese and you want something that will go great with it, all of our mongers will be educated and able to suggest a great pairing for you.

“I’m not going to have something there just because it’s cheap or because people come in and ask for it,” she continues. “I want everything to be something that I love and something I can stand behind.”

The shop also carries canned/bottled beer and features four taps for in-house pours. Beers will be specifically selected to complement the cheese, so Webster warns that there won’t be any “crazy-super-hoppy IPAs” because the brew would mask the flavor of delicate cheeses.

There’s also a Parisian-looking basket filled with baguettes if, perhaps, you’d like to create a picnic in a nearby park.

And if you’re not sure or are overwhelmed by cheese choices, the mongers will let you try five or six before you buy. It’s meant to be an experience, Webster says, one that leaves the customer feeling educated and empowered.

As for Webster, what tickles her cheesy fancy? “The stinkier the better,” she says. “They taste salty and creamy and pudgy, and they’re so good with mustard and pickles.”

The former biology teacher then explains that cheeses become stinky because of their washed rinds. The cheese maker will wash the rind repeatedly over time with a brine — or any number of liquids, including beers and ciders — to encourage the growth of the very same bacteria that makes us reach for our deodorant each morning. Think about that next time you decide to try the stinky choice.

And, if you forget, just let Webster’s clever rhyme remind you: “If it smells like feet, it’s what I want to eat.”