Instead of his standard one bite, David “El Presidente” Portnoy took two of his Graeter's cone before declaring, "Yeah. This ice cream fucks. No other way to say it." 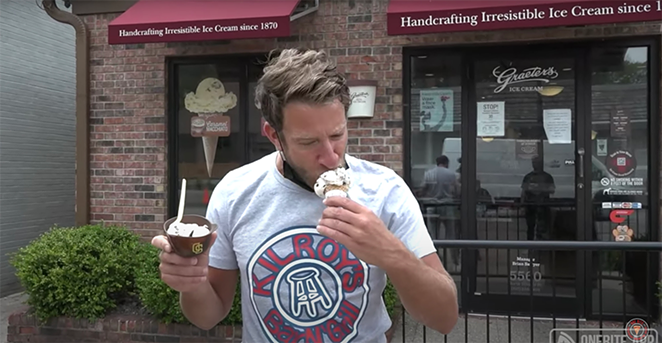 Barstool Sports founder David “El Presidente” Portnoy is well-known for his video series where he visits and reviews pizzerias using his infamous "one bite" rating system to decipher the quality of various slices from across the world (but mostly in the U.S.).

And he recently stopped by a pizza joint in Indianapolis, Byrne's Grilled Pizza, for his patented single nibble. He liked the pizza and gave it a 7.2 out of 10, but that's not where the story is.

Here's where things get interesting, at least for those of us in Cincinnati. Portnoy spotted a Graeter's Ice Cream scoop shop across the street and went in for a bonus review, intrigued by its 150-year timespan.

"Across the street I see this place: Graeter's since 1870," he says in the YouTube video. "I didn't even know humans were around then — (just) dinosaurs and ice cream. So if you say you've been around since 1870, I'm gonna try your ass."

Instead of his standard one bite, Portnoy took two of his cone before declaring, "Yeah. This ice cream fucks. No other way to say it. Holy shit this is fuck."

He blessed Graeter's with a score of 9.2.

"You don't stick around for 150 years unless you can fuck...this is beautiful ice cream. I'll leave it at that," Portnoy says.

Rapturous reviews aren't uncommon for the local ice cream purveyor. Oprah once called Graeter's "absolutely the best ice cream I’ve ever tasted," and it was declared one of the top three tastiest ice creams in America last year.

In terms of Cincinnati pizza, the Queen City hasn't fared as well on Portnoy's one-bite system.

During the pandemic, the New Haven Apizza aficionado gave a frozen Taft's Brewpourium 'za a 5.9, praising the crust and declared Strongs Brick Oven Pizza in Lawrenceburg "not horrible" (the local chain also has pizza shops in Newport, Hebron and Reading).

And then there was that time he got kicked out of Goodfellas Pizzeria's flagship location in Lexington and gave them a 0.0.