From the team behind Covington's popular brunch spot Cedar, the new scratch-made restaurant will open in the former Fairfield Market space this month. 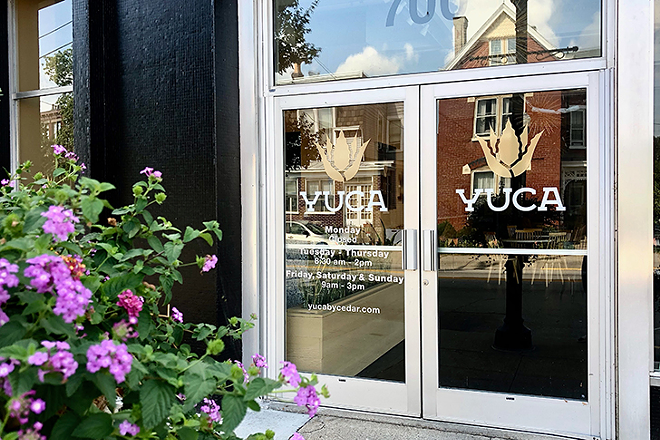 Jeremy Faeth, the co-owner and executive chef at Covington's popular eatery Cedar, will soon debut his second Northern Kentucky restaurant Yuca. Like Cedar, Yuca will be open for breakfast, brunch and lunch, but with a Latin-American twist.

The team behind the much-anticipated eatery announced an opening date for the new restaurant in a Facebook post — get your taste buds ready for Tuesday, Sept. 14.

As CityBeat previously reported, Yuca (now spelled with one "c" instead of two) takes over the space formerly occupied by Fairfield Market (and shortly after Fairfield Cafe+Bar) in Bellevue, in a building that was historically used as a bank, and is now partially used as an event space on the second and third floors. A rooftop bar/venue will open soon.

When deciding how to craft their new menu, the team – Faeth, his dad Tony Faeth, and staff — drew inspiration from Cedar.

Faeth, who is launching Yuca with his father, decided to create the new brunch spot after noticing an absence of that particular restaurant style in the area.

“We said ‘Who does Latin-American breakfast?’ You know, I can’t think of any. We can build a whole entire restaurant and menu around this food and be very successful, we think,” Faeth says.

When it comes to crafting the perfect menu, Faeth says sometimes you remarkably get the dish right on the first try, like his team did with Cedar’s tomato bisque recently. Other times, he says, it can take a couple hundred rounds. The team downed a lot of sub-par Bloody Marys on the hunt for the perfect mix.

While Yuca’s menu will have similar elements to that of its sister restaurant, the team is also working on developing some fresh feasts. Faeth says he’s most looking forward to debuting some experimental Cubano sandwiches.

“We’re getting real close on our first one that we think is going to be a very, very special sandwich — house-made pickles, we’re gonna somehow incorporate some shredded pork shoulder and probably some pork belly into this Cubano,” Faeth says. “And we’re obviously going to feature that local Sixteen Bricks bread. I think our Cubano is going to be really solid.”