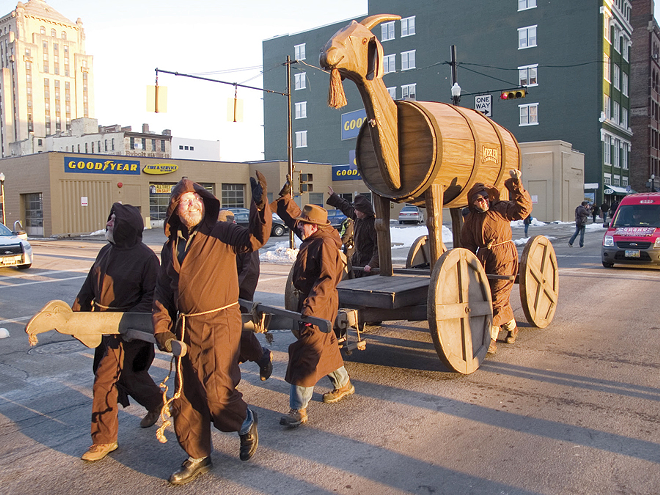 Photo: Steven Hampton / Brewery District CURC
The 25th-annual Bockfest descends on Cincinnati March 3-5.
Last week, Cincy got another craft brewery — Brink Brewing Co., College Hill’s first — but at the end of the month, the city will lose one when Ei8ht Ball inside Northern Kentucky’s Party Source pours its beers for the final time.

To celebrate our long-standing brewing heritage and its ebbs and flows, the 25th anniversary of the world’s largest bock festival, Bockfest, takes place March 3-5 at various venues in Over-the-Rhine, including the main Bockfest Hall at the Christian Moerlein Malt House Taproom. The fest begins with a drunken and debaucherous goat- and keg-led parade on March 3, and the rest of the weekend entails sausage dinners, a fish fry, Sunday brunch with a bloody mary bar, a Billygoat Ball, live music, beer tours, the crowning of the gender-neutral Sausage Queen and Arnold’s annual bock beer tappings. Find a full listing of events at bockfest.com.

• Homebrewer Michael Roller won Rhinegeist’s third-annual Homie Homebrew Competition with his Belgian dubbel. Rhinegeist describes the brew as having flavors like bubblegum, raisin and plum. It is available on draft in the taproom and in bombers.

• Braxton is replacing its core Crank Shaft IPA with a new formula and a new name: Revamp. This IPA will have more of a tropical taste. The cans will be released on March 10, and it will be available on draft in Braxton’s taproom shortly before that.

• Bad Tom’s new beer is called Doc’s Dark Cream Ale. Similar to a Kentucky Common, it contains a “hefty amount of corn and rye.” The brewery also added acidulated malt to give it a bit of tartness. It’s available on draft at their taproom.

• Last week, Moerlein launched soccer beer FC Cincinnati, a blood orange IPA. The beer is available in 16-ounce cans and on draft at the taproom and the restaurant.

• Fifty West unveiled the latest iteration of its popular Coffee Please! beer, made with coffee beans from Madeira’s Coffee Please. Chocolate Churro Coffee Please! is available on nitro only at Fifty West’s taproom. If you do not like nitro — and, believe it or not, a lot of people do not — then you will not be able to enjoy this delicious new beer.

• Morrow brewery Cellar Dweller celebrates five years on Saturday. To commemorate the occasion, they brewed a German chocolate cake barrel stout in collaboration with the Greater Cincinnati Craft Beer Society called GCCBSX2. That beer and other special brews, plus barbecue, live music and tours, will be part of the festivities.

• Fat Tuesday and a new, wild Urban Artifact beer collide during the Tuesday evening release of St. Anthony’s Quad, a beer brewed with wild yeast collected from the grounds of Saint Anthony’s Shrine in Mount Airy. The brewery worked with Saint Anthony’s friars to create the beer, which spent 10 months aging in red barrels. The beer will be released in bottles and on draft and will be accompanied by live Jazz at the taproom.

• On March 2, Rhinegeist hosts its second-annual ProKids fundaiser for the local nonprofit that advocates for children’s interests. The event will feature live music, Eli’s BBQ and specialty brews.

• It’s Girl Scout cookie season! On March 2, Woodburn Brewery will pair its Chocolate Mint Imperial Stout with Thin Mints and other Girl Scout treats. And on March 5, East End brewery Streetside will host a Girl Scout cookie-inspired tasting in collaboration with bakery The Jaded Fork. Different cookies will be paired with Streetside’s beers.

• March 8 is not only International Women’s Day, but it’s also the day Listermann will release Hibiscus Rose Hipped Saison, an homage to Rosie the Riveter. The release party will feature live music from Coconut Milk, food trucks and a raffle. A portion of proceeds will go to support the nonprofit Women Helping Women.

• On March 11, Bellevue’s Darkness Brewing teams up with neighboring bakery Mama C’s Buttercream & Sprinkles for a cupcake and beer pairing brunch, starting at 11 a.m. The cupcakes will be served with four of Darkness’ beers. For $16, you get four cupcakes, four 5-ounce pours and a full pint of beer. ©