BrewDog will donate $1 from each pint of Joey Juice to The Joe Burrow Hunger Relief Fund. 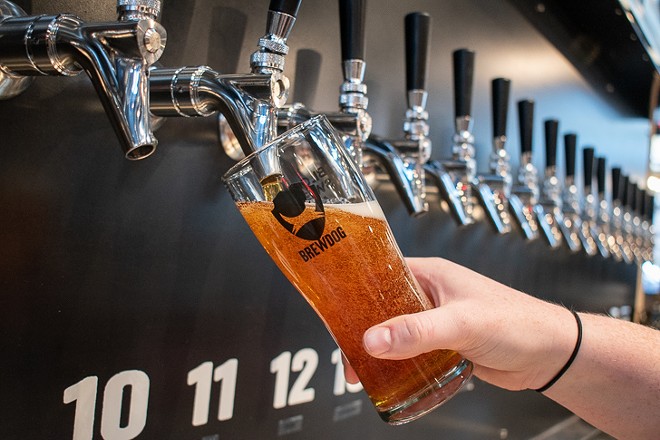 Everybody wants a little piece of that Joe Burrow magic in the lead up to the Bengals vs. Los Angeles Rams Super Bowl on Sunday. And BrewDog is literally trying to tap it with their Joey Juice beer.

The Scotland-based brewery has decided to rename its flagship Elvis Juice IPA "Joey Juice" at all Ohio taproom locations through Feb. 13 — that includes outposts in Columbus, Cleveland, New Albany and in Cincinnati (316 Reading Road, Pendleton).

BrewDog describes Elvis Juice as an IPA with a "caramel malt base, supporting a full frontal citrus overload — grapefruit piled on top of intense aroma hops."

And fans can enjoy multiple beers knowing that each pint gives back. Ohio's BrewDogs will be donating $1 from each pint of Joey Juice to The Joe Burrow Hunger Relief Fund.

The hunger relief fund provides support to the Athens County Food Pantry, as well as food aid to those in need in Athens County. Burrow went to high school and played football in Athens, and his father was formerly a football coach at Ohio University there.

The Foundation for Appalachian Ohio, which shares the story of the Joe Burrow Hunger Relief Fund on its website and helps support it, says, "The Joe Burrow Hunger Relief Fund was made possible with $350,000 from the many thousands of gifts inspired by Joe Burrow’s 2019 Heisman Trophy acceptance speech. Each gift invested in the Fund was matched dollar-for-dollar by the Foundation for Appalachian Ohio, bringing the initial investment in the Fund to $700,000."

The Foundation for Appalachian Ohio says those donations have continued to pour in since then, especially influenced by the Bengals' current winning streak. They say that as of Jan. 29, the fund is at $1.3 million. They also recently got a  $33,000 gift from the Kroger Co. Zero Hunger | Zero Waste Foundation.