The Nepalese eatery recently opened in the space that once held Melt Eclectic Café with the goal of using food as a means of connecting to new cultures. 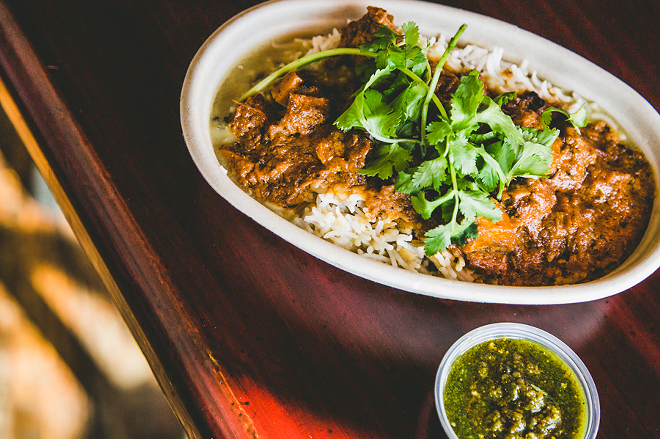 Photo: Hailey Bollinger
Bridges puts a Nepalese spin on dishes like chicken tikka masala.
The streets of Northside remind Nepal native Ashak Chipalu of home. When he looks out the front window of his new restaurant, Bridges — situated in the space that once held neighborhood mainstay Melt Eclectic Café — he sees similarly diverse inhabitants, tightly packed buildings and free space used to its maximum. And now, thanks to Chipalu, Northside has its own Nepalese restaurant to add to the list of parallels.

For the past couple of years, Chipalu, his mother Rose and his father Manoj have served Nepalese cuisine from a food cart at Findlay Market, the Northside Farmers Market and other local venues. Rose and Manoj moved to Cincinnati in the wake of the earthquakes that devastated much of Nepal in 2015; Chipalu was already in Cincinnati studying medicine. Being reunited with his family prompted him to join his mother, who had been a restaurateur in Kathmandu, in the kitchen.

At the end of February, Chipalu opened Bridges in its first permanent spot at 4165 Hamilton Ave. Rose has guided all of the restaurant’s recipes, but chances are you’ll see the entire family when you visit. Manoj typically runs the cash register and assists his family as they work alongside several hourly employees.

After some light renovation — including the installation of a cafeteria-style serving system in the front where you order food — Chipalu made the former Melt space his own. The interior seats 48 people, split between the front and back of the building, and the backyard seats 30 when weather permits. Upon walking into the restaurant, you see a vibrant mix of colors. Nepalese Folk music plays through speakers and photos of the Chipalus’ homeland, along with depictions of Hindu deity Ganesha, adorn the walls.

“The colors are really influenced by South Asian interiors,” Ashak Chipalu says. “We use a lot of red, green, yellow, orange — colors that make you feel good, feel happy. Colors of nature, like flowers.”

The restaurant name — Bridges — encourages diners to use food as a means of connecting to new cultures, which makes sense because Bridges is the first full Nepalese restaurant in the area. Cincinnati is inundated with various styles of Indian and Chinese. Though a different type of cuisine, the Nepalese food served at Bridges will strike a similar chord to those familiar flavors — ginger, garlic, cumin, chili pepper and cilantro — while imparting concentrations of smoky spice that elevate the simple ingredients. Still, it’s been difficult for the Chipalus to fully adjust to cooking here.

Cincinnati lacks access to basic ingredients that are readily available in Kathmandu. Mustard oil, for example, was the typical cooking oil Rose used in her recipes; it’s an influential ingredient used by the Nepalese Newar tribe, to which the Chipalus belong.

“Nepal is a small country but it’s very diverse,” Rose says. “In the valley of the Newari tribe, many have migrated there, but the natives of the valley are Newars and they have different kinds of foods not similar to the other people who have come to the valley. We use a much more balanced diet than the other peoples.”

Chipalu concurs with his mother’s assertion.

“Nepali food is very balanced,” he says. “(It’s a) balance of green vegetables, chicken, yellow lentils and a kind of salsa we call achar. Every meal is served with achar on the side, a roasted tomato achar, that goes really well with everything we offer. We serve it on the side to be used as a palate cleanser.”

On a menu behind the counter, diners will find options to build their own bowls or combos, with additional soups, sides and samosas — all for under $15.

To build the bowls, lentils are poured on top of basmati or a brown rice base before a stew-like entrée is added, acting as a creamy, flavorful emulsifying bond between starch and protein. Diners can choose from meat options like grilled chicken tikka masala or haku chuala (smoked chicken) or vegan dishes including cauliflower and potatoes or aloo wala.

The vegan food here is not an afterthought. Chipalu is mindful that Bridges occupies a spot formerly held by arguably the city’s most popular vegetarian and vegan restaurant.

“We have cauliflower with potato, carrot, peas and South Asian spices,” Chipalu says. “We’ll definitely have other veggie dishes as well; we’ll do specials. We have this authentic bean curry soup with black eyed peas, sour bamboo shoots, potato and tomato and serrano peppers — slightly on the spicier side and very, very good.”

Bridges is also known for its unique and wide-ranging samosa selection, including a bacon and cheese samosa. The potato, carrot and pea samosas — not unlike those served in Indian restaurants — are hearty and flavorful with just enough spice to make your brow sweat, but not too hot for sensitive palates. The chicken tikka masala, which is grilled and then simmered with a tomato and cream curry, is so popular it’s served in both the aforementioned rice bowl and stuffed inside samosas.

“It’s not spicy,” Chipalu says. “If you want, we’ll make it spicier, though.”

No formal spice level has been established at Bridges, unlike many local Indian restaurants that grade the spiciness on a scale typically from one to six or 10. With that in mind, if you tell the Chipalus that you like a little burn in your meal, be prepared to back up that statement. Like with all things in their restaurant, the Chipalus are generous with peppers.

Order your food at the counter and it will be plated before you pay. The milk chai is a wonderful counterbalance to spicier dishes. The leftovers, if any survive, reheat quite well in the microwave but should be sampled cold as well, since the flavors are slightly more pronounced. The restaurant is currently BYOB until further notice.