The "club" is customizable, allowing each person to choose the produce they want each week and pay by the pound. 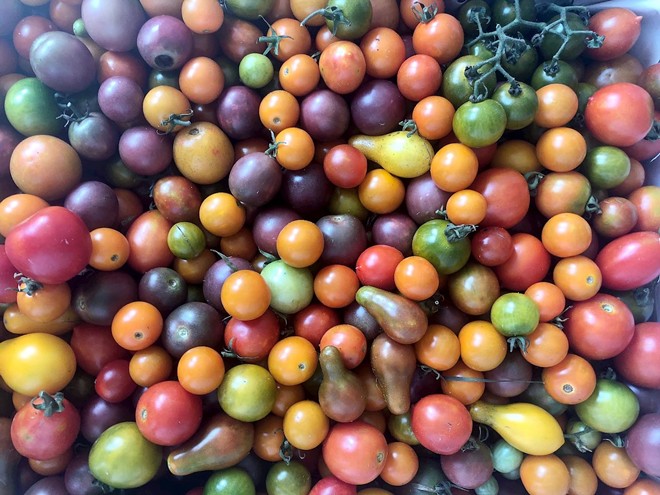 A neighborhood buyer’s club means taking home some delicious tomatoes, squash, peppers and more – all chemical-free and farmed sustainably. Even better? It builds a closer community.

In April 2020, former pastry chef Donna Covrett started selling produce to her Prospect Hill neighbors on behalf of her friends, farmers Sallie Ransohoff and Jacob Kreines. Covrett, now a yoga instructor and culinary guide, remembers the beginning of the pandemic well [editor’s note: Covrett is a former contributing editor for CityBeat]. In mid-March 2020, her yoga and healing practice came to a halt.

Ransohoff and Kreines felt the effects, too. Their mother-and-son operation, unofficially named Sallie and Sons, is a small seasonal farm with locations outside Batavia and Fayetteville. They had been selling produce to local chefs – notably Jean-Robert de Cavel, José Salazar and Dan Wright – for decades.

“Before the pandemic, I would say restaurants were kind of in a golden age,” Kreines recalls. “As far as whatever I grew, they would purchase because they wanted the best stuff. But when all the restaurants closed, our business went to absolutely nothing.”

Kreines and Ransohoff had thrown around the idea of their version of a CSA (community supported agriculture), a direct-to-consumer model in which people pay a yearly membership to guarantee a certain amount of weekly produce from a farmer. Instead, the “buyer’s club” they came up with is much more customizable, allowing each person to choose the produce they want each week and pay by the pound.

Covrett was the first person to implement Kreines’ and Ransohoff’s idea. She says she and Ransohoff have known each other since they were kids, staying in touch throughout their lives as they each moved through the culinary world in Cincinnati.

With many restaurants closing at the time, Sallie and Sons’ produce had nowhere to go, and Covrett’s neighbors weren’t leaving their homes to go grocery shopping. Selling food directly into people’s hands could be what they all needed, the team thought.

At the start of the endeavor, 40 people lined up along Covrett’s street for their items, smiling under masks at neighbors they hadn’t seen in two months or had never even met before.

"Nobody wanted to leave the house to go to the grocery store, but they wanted fresh produce and friendly faces,” Covrett says.

Two and a half years later, neighbors are still enthusiastic about local produce, especially during the popular summer tomato season. Covrett says she’ll keep it up as long as there’s interest.

The club runs through the Prospect Hill Facebook page. Neighbors typically pay $2-4 per pound, depending on the vegetable, which is generally cheaper or is at least competitive to local retail. The process goes something like this: Kreines texts Covrett his available produce for the week on Thursday, Covrett posts about it on Friday, and neighbors comment their orders through Sunday. Kreines then harvests the produce and drops it off for neighborhood pickup at Covrett’s house on Monday.

“In Prospect Hill, everyone lives vertically,” Covrett says. “So I only knew maybe a dozen neighbors before this. But now, people come from the neighborhood and all over—Over-the Rhine, Newport, Mount Auburn.”

Sallie and Sons’ farming practices are earth-friendly and sustainable, implementing re-use with as little plastic and fossil fuels as possible. The produce is chemical-free and animal-friendly. Ransohoff and Kreines primarily are tomato farmers, swearing that Ohio River-bottom soil makes their tomatoes ripe, delicious and nutritious.

“We’re more concerned with the Earth and keeping Mother Nature than we are with returning a profit from our agricultural operation,” Kreines says. “That’s how my mother does it, and it’s rubbed off on me, as well.”

Regenerative farming and local food movements aren’t new but have become more popular in the last few decades—and especially since the start of the pandemic—as a way to return to the community-based food habits of prior eras and repair disruptions in communities and food systems.

After spending decades as a chef and culinary writer, Covrett understands the relationship between community and food well.

Covrett shares Ransohoff’s and Kreines’ values of caring about health risks and chronic effects on humans, animals and soil and groundwater from continual exposure to synthetic pesticides, artificial fertilizers and added growth hormones.

“For this alone we should all be actively supporting the ‘climate heroes’ of sustainable, regenerative, chemical-free farming," Covrett says.

The buyer’s club idea has expanded from Prospect Hill to additional neighborhoods. Pleasant Ridge, Madisonville, Northside and Newport participate through Ransohoff’s and Kreines’ family and friends.

“We’re also lucky to be connected to these neighborhoods and these chefs who are very loyal to us, to consider these people our friends as well as our customers,” says Kreines. Right now, he and his mom run the farm themselves, with occasional support from family and friends to keep up with demand.

“We have lots of fellow farmers around us who are doing great work,” he says. “I encourage people to go to farmer’s markets and be really good about finding one you like and connecting with the farmers.”

The buyer’s club from Sallie and Sons Farm is based in Prospect Hill and provides local produce for pickup every week. Info: facebook.com/SallieandSonsFarm and facebook.com/groups/prospecthillcincinnati.