Enjoy coffee and conversation at this pop-up 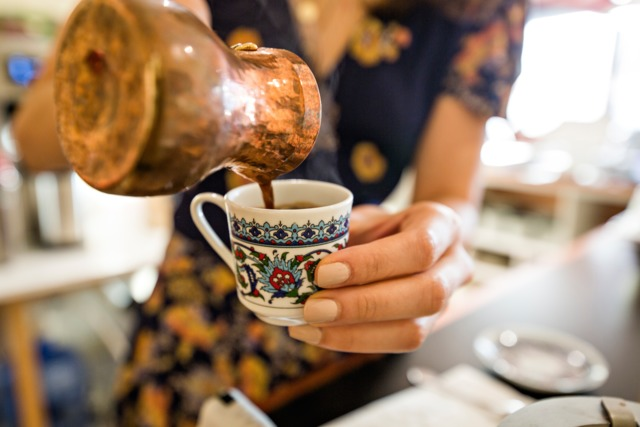 Rüya Coffee is bringing its Turkish coffeehouse to Camp Washington for a special pop-up event. From 10 a.m.-1 p.m. July 14, Rüya will be serving cups and conversation at the neighborhood’s The Welcome Project, a social enterprise with the self-described mission of empowering “marginalized and at-risk refugees and immigrants by providing affordable housing, jobs, education and skills training.”

Helmed by Melissa Aydogan, Rüya is the result of a $15,000 People’s Liberty Globe Grant, which Aydogan received last year to bring a sense of shared community to PL’s Findlay Market Globefront gallery via her traditional Turkish coffeehouse.

Since Rüya closed in November, the shop has popped up at various events and coffeehouses around town, including Newport’s Carabello Coffee and Pendleton’s 3 Points Urban Brewery. For this week’s event, Aydogan is teaming up with Cal Cullen, the director of arts center Wave Pool and co-founder of The Welcome Project.

“I think when you become a grantee with (People’s Liberty), you quickly become family,” Aydogan says. “We all try to help each other even after our grant projects end and we have our projects move on.” (Wave Pool receives funding from the Carol Ann and Ralph V. Haile, Jr./U.S. Bank Foundation, which also funds People’s Liberty. Cullen is also a PL community mentor.)

Though serving hot cups of coffee will be a primary focus, the day is equally about spreading Rüya and The Welcome Project’s shared mission of empowering immigrants and refugees. Aydogan recalls her own experiences as a first-generation Turkish-American as well as the experiences of friends who come from immigrant families. Day-to-day life can be a struggle, she says, due to constant reminders — by way of language, cuisine and traditions — that they are not in their home country.

“There’s certain moments in time where you feel like, ‘Oh, this is not home,’ but The Welcome Project, and Rüya specifically, is a project to allow Middle Easterners, but also immigrants in general, that feeling of home away from home,” Aydogan says. “It’s really important to me because I felt that growing up.”

Stopping in for a cup of coffee will allow visitors to get to know people from walks of life with which they may be unfamiliar. The space where the pop-up will be located — The Welcome Project — started initially as a joint effort between Wave Pool’s Cullen and Sheryl Rajbhandari, director of refugee aid organization Heartfelt Tidbits, as a way to provide a support system for recent refugees and immigrants. They led art classes and the artisan goods made there spawned a boutique business, followed by additional enterprises in education, job training and more. The Welcome Project is currently working to expand its mission via shared meals under its Cincinnati’s Table program, which has a goal similar to Rüya’s: bridging divides through nourishment and conversation.

Fans of coffee like Dunkin should note that Turkish coffee is darker and more bitter than the average brew. This method of preparing coffee, which dates back to the 16th century, boils ultra-fine grounds in a long-handled copper pot called an ibrik. The brew is immediately poured into a small cup, resulting in a thick, silky and very strong drink. It is best enjoyed slowly.

“Sometimes I see coffee in America as a necessity. It’s like grab and go. Whereas Turkish coffee, we take our time,” Aydogan told CityBeat during Rüya’s initial run.

There’s more to a Turkish coffee experience than just downing the dark, unfiltered drink, however. Once all of the coffee is gone from the cup, undrinkable grounds linger at the bottom. Guests can turn their cups upside down on the accompanying saucer and place their fingers on the back of the cup as the grounds slide their way out. Afterward, Aydogan will read the grounds and offer a fortune.

The fortune is less about predicting the future and more about opening a conversation about your hopes and goals, hence the name Rüya — it means “dream” in Turkish.