Inspired by a National Women Chefs & Restaurateurs Conference, the local CWFD will "advance and celebrate women in food and drink" Photo: Hailey Bollinger
Chef Frances Kroner (left) and the rest of the CWFD team from an August dinner

I have only had this experience a couple of times in my life, but it is my most favorite thing: dining with strangers.

It was on Instagram where I caught a post by Frances Kroner, executive chef of Sleepy Bee Café and Aster on Fourth. She was advertising a pop-up dinner series featuring women chefs and mixologists. I knew no other details but I needn’t any because if it involved Kroner and an all-female lineup, all I needed to know was where to sign up.

I quickly RSVPed for two (for me and my husband) and went in not knowing exactly what to expect. I wasn’t sure of the set up or whether we’d be ordering food or just enjoy a prix-fixe menu, or even if we’d be dining individually or as a group. However, it ended up being exactly what I was hoping it would be: a private table set for 12 on the balcony of downtown’s Aster with a menu of the set courses laid out before us. When I walked in and saw that, I grabbed my husband’s hand and squeezed it out of excitement. And then we sat ourselves in the middle of the table, surrounded by strangers, set to dine.

First to greet us was the inimitable mixologist Molly Wellmann of Japp’s and Myrtle’s Punch House. She concocted the signature cocktail for the evening, one she dubbed The Spicy Man, with vodka, mandarin, homemade five-spice simple syrup and soda. It was pulpy and punchy and perfectly potent. The dinner’s theme was “Moroccan” and the drink rolled out quite the Moroccan-inspired carpet.

However, the cocktail was only the beginning as there were also wine pairings provided by Kate McDonald, owner and vintner of OTR’s Skeleton Root Urban Winery. After The Spicy Man, she paired each course with wine and it became apparent we were all in excellent beverage hands. 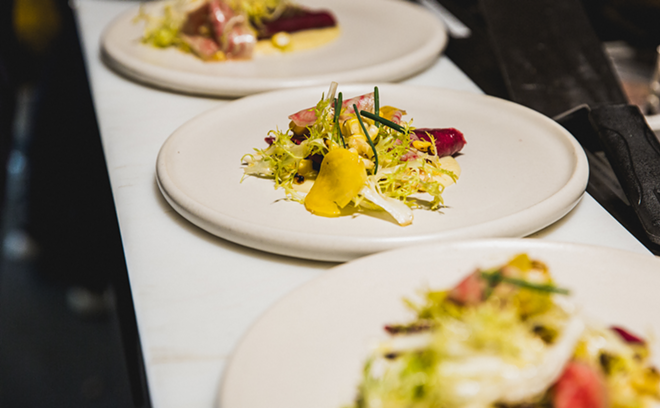 Photo: Hailey Bollinger
A dish from an August CWFD dinner

First up in food was the appetizer mezze platter, featuring a beet labneh spread, bulgur wheat with pomegranate and walnut, hummus, baba ganoush, muhammara and olives. Each and every speck and spread was deeply flavorful and all were brought to us by Kate Zaidan of Dean’s Mediterranean. The beet labneh spread stole the show for me: it was bright, pungent and wildly savory.

Then there were two entrée courses. The first was a chermoula trout served with buckwheat couscous and roasted grape tomatoes. This was crafted by Emma Cotter, executive sous chef at Sleepy Bee. The second was Moroccan chicken thighs with spicy stewed red lentils and harissa potatoes. This was curated by Kroner and Rhonda Marcotte, chef and owner of Flash in the Pan Personal Chef Services.

I assumed the trout would be my favorite, but it was actually the chicken thighs that shined. Like the mezze platter, the thighs were so richly spiced that they too stood as awesome testaments to the theme.

The finale was a dessert course, another by Cotter, and it was absolutely delicious. The dish was a piece of fig-and-almond cake with grilled stone fruit and honeyed greek yogurt. The fruit, yogurt and cake bite came together perfectly. Photo: Hailey Bollinger
A dish from an August dinner

Yet, what ultimately ended up being even better than the dinner itself was being introduced to the bigger plan Kroner was cooking up. After attending the National Women Chefs & Restaurateurs Conference this past March in Minneapolis with Sandy Gross and the aforementioned Cotter, both of Sleepy Bee, Kroner came back to Cincinnati realizing she needed to create an organization for women in the industry here.

Thus she began the foundational work to create CWFD, Cincinnati Women in Food and Drink. Its mission is to “advance and celebrate women in food and drink through connection, education and mentorship to empower their success,” Kroner says.

“To start, we are spreading the word and putting together a network of women in the food and beverage industries in Cincinnati,” she says. “We are hosting the dinner series to start up a seed fund to do a bit more branding and infrastructure for the group.

“After that, we will work toward education opportunities — small-scale conferences, mentorship. We want the group to properly reflect the needs of the community, so while we have a general direction, the scope and strategy is being influenced by the women we are meeting.”

Getting to enjoy delicious food, created by incredible female talent, in an amazingly intimate setting alongside strangers was exciting enough, but it was even better to learn that the profits from the evening would be used to further the bigger mission of CWFD.

I am looking forward to following Kroner and CWFD’s vision to be a “forward-thinking industry culture that embraces female talent and leadership.”

While the pop-ups themselves may have ended — the dinners were held July 25, Aug. 1, 15 and 22 — it is clear that the work to create something bigger and supportive of women in this industry and city is well on its way.