Created by two longtime local chefs after being laid off, Lil' Bunz will debut during pop-ups at Humble Monk Brewing Co. on Feb. 6 and 13. 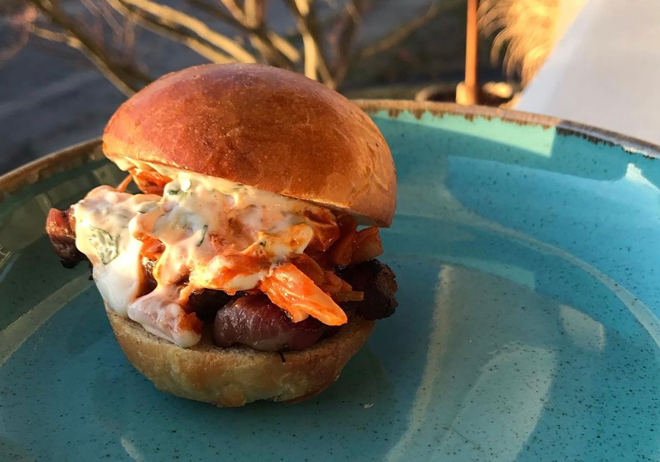 After two friends found themselves laid off due to the coronavirus pandemic, they're now using their culinary creativity and entrepreneurship to bring a new pop-up to Cincinnati in February.

Ethan Bartlett and Jordan Kuhn have been friends since high school, cooking together on and off for 15 years. Now they’re taking their friendship to another level as co-owners of Lil’ Bunz.

The "bunz" are made from pain-au-lait, which translates to milk bread.

“They are delicate and versatile and the perfect vehicle to showcase whatever you put inside of them,” Bartlett. The friends adapted the recipe for the bunz from a recipe that Bartlett learned from pastry chef, Megan Ketover, who works at Khora in downtown Cincinnati.

One of the core values of Lil’ Bunz is treating the ingredients with respect, which means working with seasonality to find the best quality, and best tasting, ingredients. One of the solutions Bartlett and Kuhn found is by making lil’ sandos, or sandwiches. “Creating lil’ sandos with the bunz allows us to tweak the menu according to what’s in season and utilize different techniques,” says Bartlett.

The friends say they had a fun time experimenting with fermentation this winter, which is why you’ll see their homemade kimchi and sauerkraut on the upcoming menu.

Bartlett and Kuhn have been regular customers at Humble Monk Brewing Co. since their opening in 2018 and formed a friendship with owners Mike and Alicia Kemp. When the Kemp’s approached them at the beginning of this year and asked if they would participate in a pop-up, Bartlett and Kuhn jumped at the chance.

Humble Monk Brewing Co. has had multiple food truck and pop-up events at the brewery and has seen much success. Since Bartlett and Kuhn had both suffered layoffs due to the COVID-19 pandemic, it gave the friends a chance to explore their culinary and entrepreneurial sides. Lil’ Bunz was born.

Bartlett has a bachelor’s degree in nutrition from Miami University and worked his way up from dishwasher to sous chef at Quarter Barrel Brewery & Pub in Oxford until it closed in 2018. Kuhn graduated from Cincinnati State with a degree in culinary arts. The two worked together at Quarter Barrel, while Kuhn also managed Bagel & Deli Shop.

After Quarter Barrel closed its doors, the pair ended up in Cincinnati, where Bartlett found work as the commissary coordinator at Sleepy Bee Café and Kuhn became executive sous chef at Social OTR. Unfortunately, COVID-19 hit the restaurant industry hard, and both men were laid off.

But thanks to their creativity, and the opportunity from Humble Monk, they were able to turn things around and focus on their new brand. “We are all about having a good time while producing some really excellent food,” Bartlett says.