Cincinnati Classics: Maury’s Tiny Cove Is a Retro Steakhouse Full of Memories and West Side Charm

The longtime establishment's lack of pretension and the friendliness of its patrons represent the West Side perfectly. 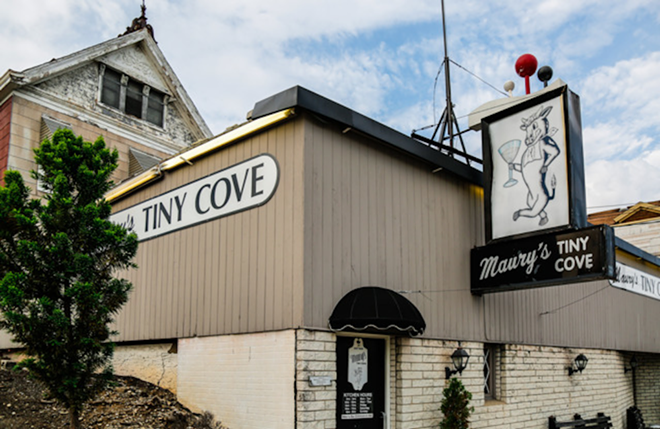 Matt Huesman, the owner of Maury’s Tiny Cove, doesn’t like the word “regular.” When referring to customers, menu items, staff or anything that perpetuates the timeless charm of one of Cincinnati’s oldest restaurants, he prefers “loyal.”

“It makes them sound regular,” he says. “A regular guest might be somebody that gets to use the restroom everyday. A loyal guest, when I say that it really encompasses the guests who came in and helped us with renovations, and they do come in weekly, even biweekly (to eat). There are our guests who have their regular seats at the bar; most want to sit in the front of the cove. The loyal guest has a better connotation because it’s so much more encompassing than the regular guest.”

When Huesman bought the West Side steakhouse 12 years ago, it was flagging. Maury’s had been serving Cincinnati since 1949. Today, it persists as an icon for what it means to be a West Sider, which Huesman says has a lot to do with pride and loyalty.

Huesman relied on the word of that loyal customer base to direct his attention to what the restaurant’s challenges were. “The three D’s” — dingy, dark and dirty — were the resounding answers, he says. Maury’s didn’t have a cleanliness problem, he adds, but rather outdated and unused interior elements like the now-removed bulky sidestations or the carpet in the upstairs bar.

After defining areas for improvement, Huesman was compelled to marry Maury’s beloved signature interior with necessary updates and minor redecorating.
In a testament to their dedication to the restaurant, customers pitched in both physically and financially, Huesman says. Some helped paint, while another paid to update the entire exterior landscaping. Huesman added a deck and a door to the upstairs lounge, Maur’s Bar, which granted the establishment its second window and allowed Huesman to tweak the darkness as part of the business’s cozy cove charm.

“I like to think that the guest is our focus,” Huesman says. “Even when we did the renovating, we did everything with the mindset of, ‘We don’t want to upset the applecart, we want to honor the tradition of Maury’s,’ and that worked. Even our music is set for this kind of atmosphere.”

A jukebox filled with music from the 1950s usually governs the ambiance, with a lot of Frank Sinatra and Dean Martin. “The More I See You,” by Nat King Cole is a mainstay, Huesman says.

The soundtrack is met by a retro interior — most of which hasn’t changed in 70 years — and when Cole’s smooth voice reigns atop soft violins, you can almost hear the crackling of a record player. Red leather booths line the wood-paneled walls of the cove on the first floor, reaching toward a low tin ceiling embossed with a doily-esque pattern. Each table is draped with white linen cloth and dimly lit with personal lamps. Glass booth dividers are etched with martini glasses that morph into bull horns, a familiar symbol at Maury’s.

The late Maury Bibent, Maury’s original owner, was a Taurus. Friends and customers made it a tradition to give him all sorts of bull knick-knacks and figurines, which worked their way into interior decorations and even Maury’s logo. The restaurant has only had two owners since.

Huesman recently replaced a number of Bibent’s bulls with a collection of character mugs that honor his father, and the bulls were auctioned to help pay for the restaurant’s renovations.

Maury’s exterior is unassuming. The entrance, branded with a simple black-and-white lettered sign, sits on the main strip of Harrison Avenue in Cheviot. Its long gray-and-white facade boasts yet another bull, on a nearly life-sized sign, holding a martini glass with a dinner napkin tied around its neck.

Upon entry, customers are greeted warmly and promptly by any staff member within earshot. Brittany Ammer, bartender and manager, juggles serving the bar, handling tables and responding to staff members’ inquiries. Huesman sits at the end of the bar, returning calls to confirm reservations, penciling in times and details, periodically stopping to deliver food to tables or chat with a guest. The bustle of the evening rush stirs and a line forms for carry-out pickup. There are only a few free tables left.

“Hello, welcome to Maury’s. How are yahs?” Ammer asks the crowd. She serves a customer a Maur-hattan, Maury’s classic Manhattan cocktail, and says brightly, “Let me know if you need anything else. I’m here until the lights go out.” 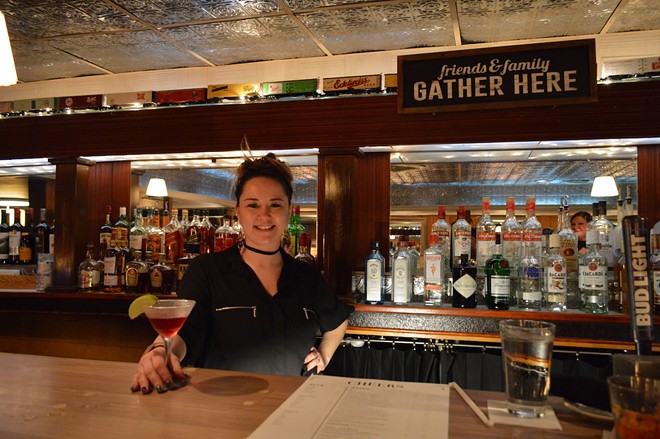 “That’s only because she turns them out,” a smiling hostess jokes as she passes the bar, a group of guests tailing behind her.

Much like the venerable interior of Maury’s, a bulk of the menu offers the original restaurant’s dishes, which Bibent named after local sports teams. When Huesman took over, he added many of his own dishes but didn’t take anything away.

The Bearcat is an 8-ounce filet mignon served with Maury’s famous shredded lettuce salad and choice of side.

The Panther, a fish sandwich named after Elder High School’s mascot, is one of 50-year customer Mary Sue Cheeseman’s favorite choices. Cheeseman likes to indulge in the weekly specials Huesman imagines, but she says her late mother’s favorite meal was the salad.

“My mother thought Maury’s salad was the only salad that was any good because, quote, she didn’t like ‘weed salads,’” Cheeseman says. “She didn’t like all those new lettuces. She loved to go to Maury’s before she died.”

As a lifetime West Sider, Cheeseman chose Maury’s to commemorate some of the most memorable moments of her life. In addition to visiting consistently with her husband Terry, she has groups of friends who convene there often. Cheeseman says one of her fondest memories is gathering friends and family there to celebrate her late mother’s life in 2016.

When the Cheesemans were looking forward to their Oak Hills High School 50-year reunion, they found themselves in a last-minute scramble to secure a location. Cheeseman says she called Huesman the same week of the event, and he was able to move things around for the group to gather.

“I said gosh, I’ve got to find someplace for all these people to go,” Cheeseman says. “And he opened up the upstairs to us. And as graduates of Oak Hills, coming back for a reunion, that just meant a great deal to us. That was as comforting as being back at the high school.”

“I describe it as our own Cheers. It’s like everybody knows your name,” Cheeseman continues. “That’s really what I enjoy about it. And like I say, you’re always going to know one or two of the people in there — if you don’t know a whole lot more than that. It’s nostalgic and comforting.”

Scanning the dining room on any given night, you get the feeling just about anyone inside could share a fond memory of a time at Maury’s. And while the term “regular” doesn’t do any facet of the place justice, as a term of endearment, there are a lot of simple, regular things that make the West Side of Cincinnati what it is — traditions like parish festivals and the Harvest Home Fair, high school rivalries and football games. The lack of pretension and the friendliness of its patrons give this side of Cincinnati the beloved hometown charm it’s known for, and Maury’s Tiny Cove punctuates that perfectly.