The restaurant will be offering traditional, boneless wings and cauliflower wings plus appetizers and salads 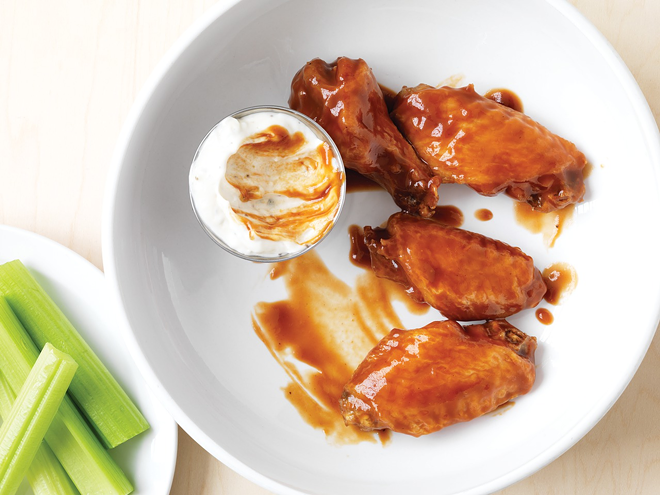 "The food that we have at our locations, the fresh, never-frozen with the chicken and the burgers, that's exactly what's being taken to the Machine Room. So it's not a changed menu. It is exactly what you're going to get in the stores," she says. "We will have our traditional and our boneless wings. We're also going to bring cauliflower wings. We'll have burgers, some appetizers — our onion rings, pretzel bites, french fries, things of that nature — and salads as well."

If you aren't an avid game-goer, the Machine Room is named for the 1970s "Big Red Machine" — that team that won two World Series and dominated the National League. It's located near left-field and fans frequently think it's an exclusive space.

"There's two entrances: one is on the suite level, so a lot of people thought that it was only suite-level entry in there. But there's actually another side that you can get in as well, completely open to all Reds fans," Barratt says.

"(We want to) make sure that everybody in the ball park knows that they're welcome to go in there and enjoy it."

The first day the Machine Room will be open to the public is Saturday, March 28. (The Machine Room is available for private parties and is booked for Opening Day.)

In addition to providing the menu at the Machine Room, local Buffalo Wings & Rings will be offering Reds-themed events when the team is away.

"We're going to be doing things in the stores for away games as well," Barratt says. "We'll have Reds watch parties in our 12 Cincinnati locations throughout the season, where we'll have the mascots there giving away Diamond Club seats, and just doing quite a few different experiences in the store so you can keep the Reds fan engaged while (the team is) out of town as well."