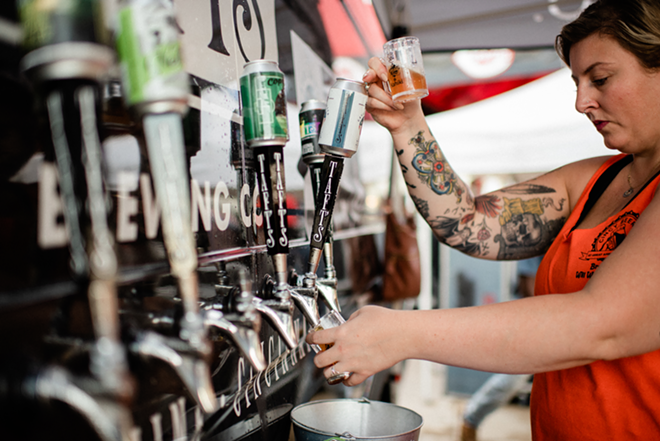 We’re in the Dog Days of Summer — literally. Several breweries are hosting dog-themed events for humans and their furry friends.

On Aug. 4, Grainworks gets into the lazy days of summer with Pools, Pooches & Pints. Bring your pup to splash in a doggie pool and enter them into a dog swimsuit contest. Snow cones and food trucks will also be on hand. On Aug. 10, Municipal Brew Works hosts the third-annual Ales for Tales. There will be a pet parade, a pet talent contest, a pet photo contest (cats are welcome), food trucks, live music, beers, vendors and adoptable animals. Proceeds benefit the Animal Friends Humane Society. Once a month, 3 Points Urban Brewery goes dog-friendly during Pups & Pints. On Aug. 25, bring your dog to the brewery for treats and a special photo booth from the upcoming Cindependent Film Festival.

Cincy Summer Beerfest is back Saturday, Aug. 3 with a change of venue. The 11th annual summertime event is moving from Great American Ball Park to Smale Riverfront Park for a single-day, two-session party. The fest promises hundreds of craft beers hailing from over 90 breweries, plus views of the city, sips from distilleries and wineries, live music and a silent disco. The event is split into a day session and a night session. Admission includes 25 samples and a souvenir mug. Get info and tickets at cincybeerfest.com.

•  Brink recently released Brink Rash, a Cincinnati Rollergirls-inspired beer containing blackberries and blueberries (black and blue like a bruise, get it?). Try it on tap.

• Christian Moerlein has released a Glier’s Goetta beer, brewed with subtle spices and Glier’s oats, not actual meat. Get it in cans throughout the city and on draft at the OTR taproom.

•  July 20 marks the 50th anniversary of when Ohioan Neil Armstrong and some other guys landed on the moon. To commemorate the occasion, Fibonacci has teamed up with Northside’s Higher Gravity to brew sour ale Lower Gravity, made with local blueberries and starfruit. Find it on tap at Fibonacci and Higher Gravity. Rivertown also brewed an Apollo 11 beer — Far Side of the Brew — with notes of blood orange, watermelon and blackberry. Find it on draft at their taproom.

•  Is it too early for Oktoberfest beers? West Side Brewing doesn’t think so. Last week they released West Side Oktoberfest on tap and in cans. The amber lager is made with German malt, German hops and a German lager yeast, so it’s very German-y.

•  MadTree recently collaborated with Dayton, Ohio’s D20: A Bar with Characters to brew Shenlong, which translates to “god dragon.” It’s a juicy pale ale brewed with Strata and Denali hops and Szechuan peppercorns. Get it on tap at D20 and MadTree.

•  Fifty West’s Tastee Whip Ice Cream Ale can be found on nitro at their taproom. It evokes the feeling of visiting creamy whips around town, except in adult beverage form.

•  On Aug. 3, Listermann will release two new canned beers. Bad Decisions is a NE IPA brewed with several kinds of hops, and Mama Needs a Milkshake is a NE Milkshake beer brewed with El Dorado and Centennial hops, blackberries, raspberries and vanilla. •  Krohn Conservatory hosts Botany and Brews on Aug. 2 featuring Woodburn Brewery’s new Yoshino cherry beer. Tickets are $30 and include one drink, a short lecture, a tour and the chance to wander around the conservatory in a buzzed state.

•  On Aug. 9, Braxton hosts the second annual Covington Beer Mile. Runners get to drink one Braxton Buzz Honey Peach Kolsch per quarter mile. They will also receive a medal, a slice of pizza and an extra pint of beer for their effort. Prizes will be awarded to the best male and female runners. Registration is $30.

•  Do you like to bake pies? Enter Brink’s homemade pie baking competition on Aug. 10. No entry fee is required, but the contest is limited to 60 pies. The pies and crusts must be homemade and winners will receive crowler fills, an apron and a Brink glass. Brink will brew a few pie-inspired beers to go along with the tasting, which is open to the public.

• Hops in the Hangar takes place at Middletown Airport on Aug. 10. Hosted by Rivertown Brewery, you can sample 15 beers from 30 different breweries. Check out some aircrafts, dine on food truck dishes and watch skydivers and an aerobatic flight team risk their lives. Just don’t drink and fly. Tickets cost $20-$65.

• On Aug. 17, Swine City Brewing hosts its second annual Swinefest. They say it’s “a love letter to those who keep us going.” They’ll have fun activities, food and beer.

•  You know that 1987 movie Over the Top in which Sly Stallone plays a truck driver who enters arm-wrestling competitions? Well, Fretboard Brewing is hosting Over the Top Fest complete with first responders arm-wrestling in a tournament Aug. 16-17. Besides smack downs, the fest will also have local eats, a live performance from Bootsy Collins and the release of a beer collaboration between The Bootsy Collins Foundation and the brewery.

•  On August 23-24, Urban Artifact throws the fourth annual beWILDerfest. More than 35 musical acts — including national acts Clap Your Hands Say Yeah and Screaming Females and local acts Moonbeau, Lung and Tweens — will perform on multiple stages throughout the brewery. They will also have artisan vendors, kids’ activities, comedy acts and beer infusions.