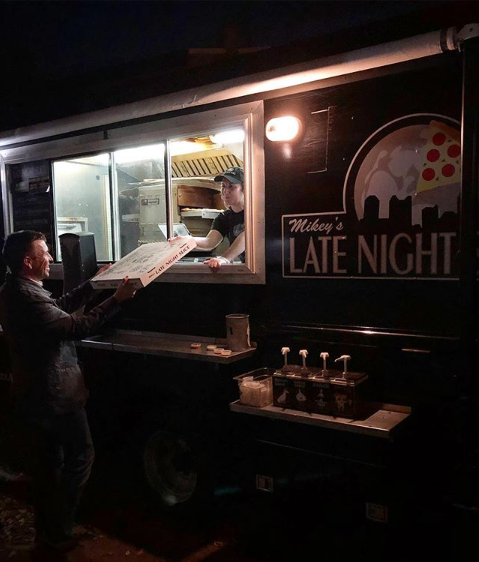 What started out as a pizza-selling operation out of a glorified closet in Columbus, Ohio has transformed into a multi-location late-night (and daytime) pizza parlor that will soon be expanding into Over-the-Rhine. Mikey’s Late Night Slice and sister establishment Oddfellows Liquor Bar are setting up shop in the Queen City with a dual-purpose space at 2014 Elm St., just down the way from Rhinegeist. There will be drinks and pizza, hopefully starting in early January 2019.

Mikey’s Late Night Slice was launched by two former Columbus pedi-cab drivers — the titular Mikey Sorboro and Jason Biundo, the company’s chief creative officer — who were selling other people’s pizza to hungry patrons before figuring out their own recipe. That recipe is now a cult favorite in Columbus and they’ll be bringing the same menu to Cincinnati.

“A lot of folks think that we’re New York-style. The truth is, we’re inspired by New York. But we’re more of a hybrid of New York and Ohio styles — the latter being something we didn’t even know was a thing at first,” Biundo says. “We have the big floppy triangle slices. But we also have a chunky sauce with a cheese blend found on favorite pizzas from Ohio.”

Photo: Provided
Mikey's Late Night Slice truck will be parked outside of Rhinegeist through Saturday for Pizza Week.

The focus at Late Night Slice is on slices with five main options: cheese with basil, mushroom and roasted garlic, “plain-ass” pepperoni, “spicy-ass” pepperoni and Italian sausage, plus a rotating pizza of the week — generally something decadent and creative, like a cheesesteak pizza. Slices will be available to grab and go (or eat in) and you can also order entire pies: they come in one size — 18 inches — and are divided into six large slices.

And with the "late night" nod in the name, Mikey’s also has classic “drunk food.” Their Cheezus Crust is basically a kind of pizza grilled cheese, where American cheese is melted onto two slices of any Mikey’s pizza and then pressed into a sandwich. Another super popular signature is the Pizza Dawg, a hot dog, stuffed with pepperoni and cheese and wrapped in a slice of pizza instead of a bun.

“While we’re proud of our pizza and think it’s pretty exceptional, we know that you can walk out our door and find pizza from somewhere else less than five minutes away in any direction. We also focus on the experience,” Biundo says. “Keeping the hours that we do, it’s easy to have a bit of sassy and irreverent style with all we do. We like to make sure folks enjoy a laugh along with their grub, whenever they visit. We put a lot of thought into all of our decor, menu, and marketing. If it makes us laugh, we expect it will do the same for most of our guests. We like to use words like ‘unique,’ ‘quirky,’ and ‘instagrammable.’ ”

Right now, you can sample Mikey's Late Night Slice from their truck parked outside of Rhinegeist through Saturday (Nov. 10) for Cincinnati Pizza Week. They're open the same hours as Rhinegeist and will close Saturday night after they sell out. Follow on facebook for more info.