In his 10th year in business, Mikey Sorboro and his business partners have opened their fifth Mikey’s Late Night Slice pizza shop and second Oddfellows Liquor Bar just a block north of Rhinegeist in Over-the-Rhine. It’s the first hybrid destination for the Columbus-based chains.

One side of the shared space at 2014 Elm St. offers glowing neon signs, ’80s music videos and pizza by the slice while the other side houses an old-school bar, classic cocktails and walls full of antique finds, all perfectly curated for guests’ Instagram feeds. Connecting the two is what Mikey refers to as the “grotto” — a fountain, pink neon signs and ceiling mirrors to direct you to the bathrooms, which are purposefully impossible to miss. Both sides (and the bathrooms) are open until 3 a.m. on the weekdays and 4 a.m. on Friday and Saturday.

“Mikey hand-picked every single piece of decor you see in every single shop,” says Jill Sorboro, Mikey’s sister and the operations manager for Late Night Slice and Oddfellows.

Each leather upholstered bar seat, chandelier, Jesus statue holding a neon pizza slice and pretty much every other trinket and fixture you’ll find at the shop has been thrifted or reclaimed from an antique store. Every time Mikey travels, he comes back with a piece he found along the way, Jill says.

Mikey doesn’t have a long-running history in the culinary field. Before he was a pizza entrepreneur, he was a traveling DJ, booking gigs across the country, occasionally planting his feet for longer than just a few night’s worth of shows. While he was posted up in San Francisco, he encountered his first pedicab — a bicycle-driven rickshaw.

And when he headed home to Columbus, he swapped his DJ setup for a pedicab that he drove on weekends. It was then that he noticed a lack of late-night, by-the-slice pizza joints. So, while he was toting people around the city on his bike taxi, he started incrementally saving up to open his first pizza shop.

“I’d finally make enough money to get an oven. Then I’d ride my pedicab for another week or two and buy a fridge,” he says. “And suddenly we had this little pizza shack setup.” 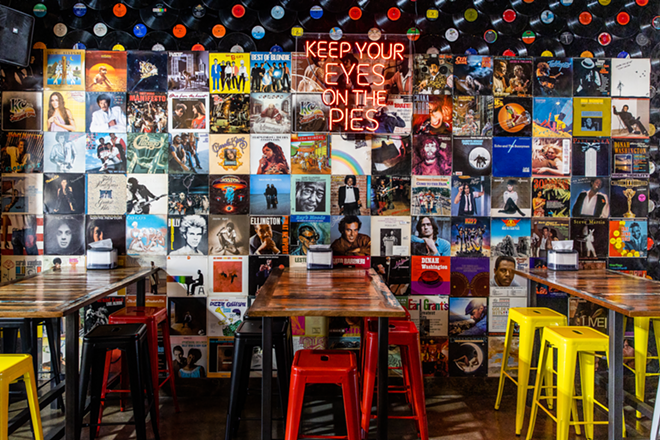 Once his first shop took off, Mikey started expanding his business until his pizza places were peppered all over the Columbus area, from Short North and Clintonville to downtown. The business has expanded over the past decade thanks to a dedicated team of friends and family who’ve been working as a well-oiled machine since day one, according to Jill, who has helped open each shop.

She’s worn many hats throughout the years and picks up the slack when Mikey is traveling or putting out fires at any of his other locations, which all serve a blend of Ohio/New York-style pizza and “unpretentious classic cocktails.”

A slice costs $4.50 and is served on a pizza pan if you’re eating in. If you’re doing take-out, each slice is bookended with a paper plate and placed single-file in a paper bag. A whole pie costs $22-$26 and comes with assorted toppings ranging from a basic pepperoni to the Kumana Wana Laya, with ham, pineapple and cinnamon to the Wedgie, which “grabs you by the onions, green peppers, mushrooms and tomatoes….and pulls.”

Beyond the pizza, Mikey’s offers a menu heading called “Rabbit Food,” aka two salads. One, appropriately named the “Basic Ass Salad,” has romaine, roma tomatoes, red onion and croutons. A slight variation on the first, the “Spicy Ass Salad” swaps out the tomatoes for pepperoni, onions for banana peppers and croutons for Flamin’ Hot Cheetos.

And with the “late night” nod in the name, Mikey’s also has classic “drunk food.” Order one of the Sacraments — a list of outrageous pizza bastardizations that “you pretty much have to be hammered to eat,” Mikey says. The Pizza Dawg is a butterflied hot dog stuffed with pepperoni and cheese and served with a pizza as the bun. The Cheezus Crust and the Baby Cheezus are grilled cheese sandwiches with pizza instead of bread; the Baby Cheezus is slightly less overwhelming in size but “every bit as blasphemalicious.”

And both bars in the establishment — on Mikey’s side and on Oddfellows — carry gluten-free beer and prioritize freshness in their cocktails.

“Fresh-squeezed citrus changes the cocktails,” Jill says. She’s been bartending for well over a decade and has helped build the bar program at both Late Night Slice and Oddfellows to create classic and quirky cocktails that have quality ingredients at their base. Plans are currently in the works to get a slushie machine to serve frozen versions of everything from margaritas to negronis.

The team at Late Night Slice and Oddfellows have been expanding their empire for a decade and aren’t looking to stop soon. More shops are on the horizon for 2020.