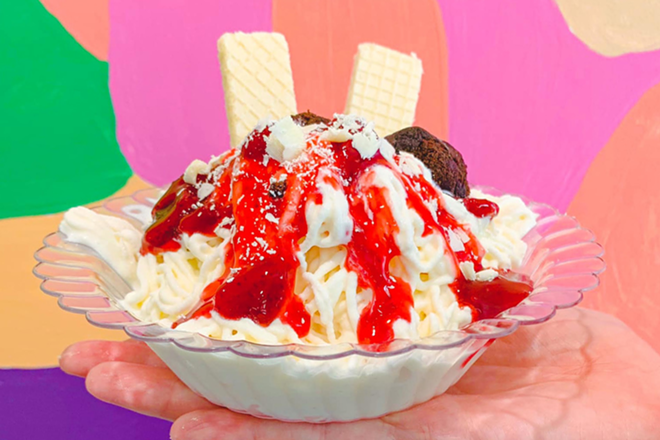 Covington’s Roebling Point District has gotten a new sweet slice of Germany in the form of Eishaus, a family-run walk-up window that specializes in spaghetti eis.

Yes, spaghetti. But the dessert isn’t made of pasta; it’s actually standard ice cream pushed through an extruder — like the pasta attachment on a KitchenAid mixer — to form strands, which are then topped with everything from chocolate sauce and shavings to cookies, cereal, fruit and whipped cream to resemble the classic Italian dish.

“The most popular, as of opening, has been frikadelle,” says Luann Vondenbenken, who runs Eishaus with her husband, Tom, and two adult daughters, Addie and Grace. “That is made to look marinara spaghetti, so it has the ice cream, it has strawberry sauce, which makes it look like the red sauce, then we add two brownie meatballs — we make the brownies in our place — and it has a little sugar wafer to make it look like a breadstick. And then we put white chocolate shavings on it to make it look like Parmesan cheese.”

Spaghetti eis was invented in Mannheim, Germany in the 1960s by a man named Dario Fontanella in his father’s ice cream shop.

“My husband's parents were immigrants of Germany, so as a young child, he would go over there to visit often. And a fun family tradition when we went over there was to go to the local ice cream parlor, but (we) had spaghetti eis because it's something different that we didn't ever have here in the United States,” Luann says.

“That we know of, there's only two other places in the United States that (make) it — one shop is in San Francisco, and one shop is in New York City.”

Luann says that in Germany, most spaghetti eis desserts are topped with fruit, but for their shop, they “Americanized” the recipe by focusing on toppings that are popular in the States, like chocolate and peanut butter. Other Eishaus creations run the gamut from spaghetti carbonara with marshmallow sauce and a spaghetti lagerfeuer with s’mores to a 3-way with chocolate sauce, Rice Krispies, yellow chocolate shavings and mini Nilla wafers to act as oyster crackers.

“Everybody needs crackers with their 3-way,” Luann says.

Eishaus opened to customers last weekend at its location on Court Street, right behind Molly Malone’s, but is hosting its official grand opening this weekend, after they get their awning up.

“Before the pandemic, we were going to open a coffee and eats place a different location in Covington, and it was going to be an indoor-seating model. And when the pandemic hit, we decided that we needed a more of a pick-up window type thing,” Luann says.

The current menu includes coffee, latte and tea options (made with local La Terza coffee), in addition to spaghetti eis, and a forthcoming breakfast menu. Eishaus’ late night menu will be unveiled this weekend, featuring a handful of hot dogs, beer cheese and pretzels and walking tacos, with options for those with food sensitivities.

“We have vegan, vegetarian, gluten-free and regular food options in all of our different categories,” Luann says — and that includes the spaghetti eis. (One of her daughters is a vegetarian and the other is vegan so Luann says these alternatives were important to offer customers.)

As for the reaction so far, Luann says the neighborhood has been very welcoming, and so have customers, once they realize what the dish is.

“We were sitting outside (Eishaus) doing some final things, and (a couple) came up and looked at the menu and they were surprised— they didn't realize what it was,” Luann says. “So we went and told them and they said, ‘Oh, we thought it was spaghetti, with like pasta spaghetti with strawberry sauce on it. That's what the picture looks like.’ And we're like, ‘No, it’s ice cream.’ So they actually did come back and try it (after we were open) and they were very pleased with it.”

Eishaus is attached to 117 Park Place, at the corner of Court Street and Park Place in Covington. For more info and updates, visit facebook.com/Eishauscov or eishauseats.com.

*An earlier version of this story said the ice cream was mixed with soft serve; it's not.