Have your cake and discuss mortality, too, at Arlington Memorial Gardens’ monthly Death Café

o one knows what happens to us when we die, which is why death is such a compelling topic. Compelling enough that in 2011 in England, Jon Underwood and Sue Barsky Reid formed the Death Café, a meeting place for people to convene and discuss such heavy matters over pleasant things like tea and cake. The idea soon spread to Columbus, Ohio, where Lizzy Miles held the first Death Café in America in the summer of 2012. The café was so well received that eventually hundreds of other cities started their own chapters, including a chapter here in Cincinnati.

In April 2013, Cindy Maril read about the Columbus café in USA Today and felt inspired to meet with Miles. After Maril and her co-worker Pete Tunnat learned from Miles how it all worked, they held the first-ever Cincy branch of the Death Café in October 2013 at Arlington Memorial Gardens, where they work as family service advisors, doing everything from end-of-life pre-planning to walking patrons through the emotional process after a death has occurred.

“We talk to people all day about death in some aspect or another, and people just have these incredible stories, and they want to talk about things,” Maril says. “But I could just tell there needed to be more of an openness to it. It’s definitely for that group that needs to chat.”

Cincinnati’s Death Café has since been held almost every month (with the exception of December 2013 and August of this year) at Arlington, which is an unsettling yet apropos place for such a morbid congregation — especially since other Death Café groups meet at more lively spots like Panera.

During a meeting, which is held inside at the main office’s community room, the 20 or so attendees are separated from their friends and are seated at tables with strangers. The meeting begins with Maril and Tunnat asking the group, “Why are you here?” That can lead to any sort of topic, regardless of ideology. In one meeting, a minister sat next to an atheist, and the two shared their views on death. Pretty much anything goes, except for judgment and marketing.

“It would be so easy for us, Cindy and I, to have a commercial at the beginning or the end just to talk about pre-planning,” Tunnat says, “but we think that’s just not what the intent is.”

The purpose is for strangers to have a safe environment to express grave matters they can’t express to friends or family, but Maril wants people to know it’s not a bereavement program.

“We’re not trained counselors,” she says. “I try to make it clear with people, if you are grieving and you’re sad and you need to talk about that, we’re not it.”

The people who come to these cafés range from youngsters to middle-aged folks—no goths yet, surprisingly. It’s free to attend the cafés — they receive no funding — and the coffee, tea and baked goods, like banana bread and Grim Reaper-iced cookies, are also gratis.

With the comfortable demeanor Maril and Tunnat talk about death, you’d think they’d been doing this for years, but that’s not the case. Maril was unhappy working in advertising and she had an epiphany after meeting with one of her clients a year-and-a-half ago, Arlington’s president, Dan Applegate. “I’m a relationship-based person and I thought, ‘Oh my gosh, that might be exactly right for me.’ Because I’ve had cancer, I’ve had to face death. It just felt right,” she says.

Like Maril, Tunnat’s a natural, but he, too, came from a disparate background. He worked in IT for 28 years, lost his job and then, during a conversation with his neighbor four years ago, his future materialized. “My next-door neighbor asked me if I ever thought about working at a cemetery, and my first thought was, I am too damn old to dig graves,” he says. “And he said, ‘You won’t be digging graves. It’s sort of sales, it’s sort of counseling.’ It’s where I’m supposed to be.”

So what does happen when we die? “I believe in reincarnation, so I think we just go back into our soul and we put in the pieces of the pie that we did right and kind of go, well, you might need to come back and do a few of these things over,” Maril opines.

She and Tunnat may be frank about our inevitable demise, but they think death needs to be a more pervasive and accepted issue. “[It’s] going to happen to everybody, yet our society or our culture or personalities, they’re resistant to just freely talking about it,” Tunnat says. “My goal would be we’d increase the ease in which [we] talk about death.”

Despite enveloping themselves in that taboo subject, Maril and Tunnat transmit hope through their jobs and the café. “On the flip side, what I see every day is how much people love each other,” Maril says. “And really, at the end of the day, that’s all that matters, the love you feel for that person.” 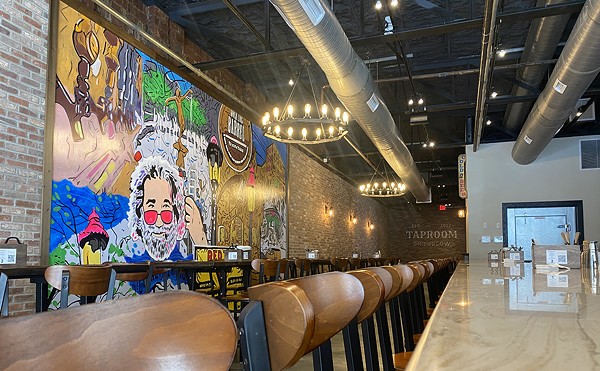