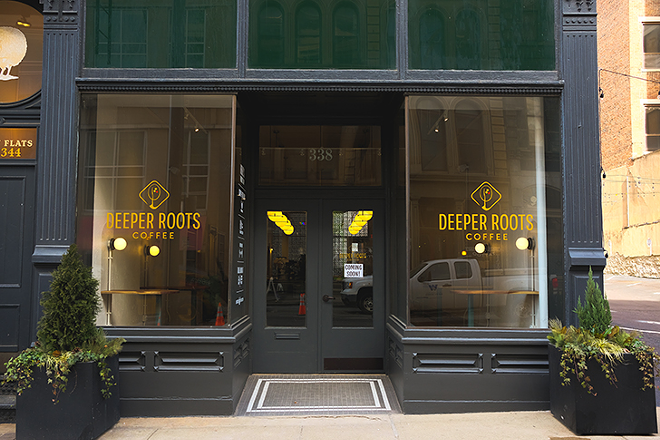 You’d be hard pressed (French-pressed?) to find someone in Cincinnati who has not tried Deeper Roots coffee, whether on purpose or not. While Deeper Roots has brick-and-mortar cafes in Oakley, Over-the-Rhine and now Fourth Street downtown, other coffee houses in Cincinnati use their beans.

The new 1500-square-foot Deeper Roots in the up-and-coming Historic West Fourth District shares the street with some relatively new and trendy spots: Covington's Handzy Shop + Studio opened a second location there and sustainability-shop-plant-store-duo Koko and Forage are only steps away.

“There were a lot of early deliberations around where we should put our energy toward a new location,” says Jon Lewis, Deeper Roots' director of community engagement. “Through conversations with the developer, The Loring Group, we were intrigued by their vision for the community in the Historic West Fourth District and loved the idea of serving the residents of that corner of downtown while also being proximate to the business culture and events that bring the city to life."

Andrew Naab of The Loring Group says the goal with developing the district is to "complement OTR so people feel like they can go to and from OTR to Fourth Street and vice versa and explore a different part of downtown that until recently was pretty quiet.”

The new cafe — with an interior designed by The Drawing Dept — is similar to Deeper Roots’ Over-the-Rhine and Oakley locations in terms of the menu. Pastries from Sixteen Bricks line the front counter, and on Sundays, they bring in pies from O Pie O in East Walnut Hills. The Fourth Street shop is twice the size of the other locations, though, and when the time is right, it will seat 40+ “coffee-loving” people, according to Lewis.

Deeper Roots works with Guatemalan farmers to source their beans, a connection that began in 2005 when Les Stoneham, co-founder and CEO, began roasting coffee.

“In coffee-producing countries, a farmer quite literally can be a backyard farmer who lives by contributing what they grow in their plot to a larger co-op or group,” Lewis says. “And so recognizing and working together with some of those groups has been important.”

Currently, the location is only open for carry-out, with tables and chairs roped off due to COVID restrictions.

Deeper Roots has served coffee to the Cincinnati area for almost 10 years now, and their next step is to do more of the same.

“I read an article about (Clifton's) Highland Coffeehouse today, and it made me think a lot about this question: ‘When is the best time to plant a tree?’” Lewis says. “And the answer is 20 years ago. The second best time to plant a tree is right now. So to say, the best time to open a coffee shop is 20 years ago. But the second best time is right now because now, more than ever, there is a need for human connection. And we look forward to the day when we can have people sitting here, hanging out and having conversation.

"Until then, even just that brief interaction when you come in, stop and get a coffee and say hello to a living breathing human barista...it makes a big difference.”