Watch out for Bbot technology; Jacob Trevino hopes to bring a slice of “future” to more Midwest establishments 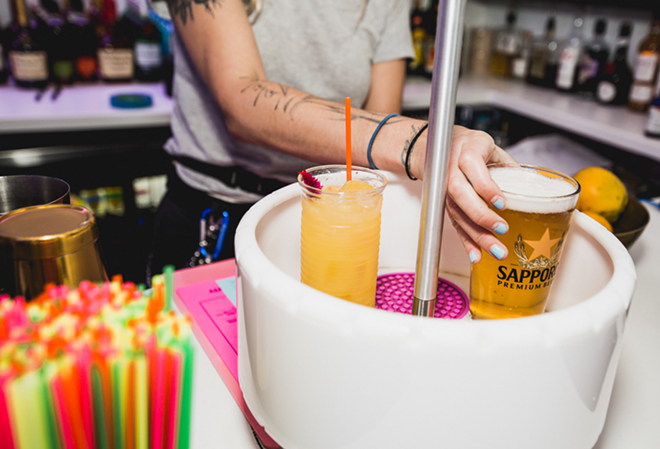 If that imagery gives you Black Mirror vibes, don’t fret. Your drinks are still concocted by human hands. This little dude just serves ‘em. The technology also eliminates the need to wait in line to order or worry about closing tabs — just pick your location and order virtually via bbot.menu.

In addition to Tokyo Kitty, Jacob Trevino of Gorilla Cinema Presents also owns equally thematic bars Overlook Lodge and Video Archive. In a press release, he announced that he hopes to bring the tech of Tokyo Kitty to other bars, breweries and event spaces with “the ultimate goal of creating better experiences for customers” as well as more efficient businesses.

The ordering system doesn’t require users to download an app or sign-up — all they have to do is order and pay directly through their cellphone (in Tokyo Kitty, each private karaoke room is equipped with an iPad). Though Bbot began in New York City, and is used in several venues there, Trevino wants to bring it to the good ol’ Midwest.

“I’m really excited about the possibilities of this technology for all types of venues,” Trevino says. “It gives so much control to the patrons and helps streamline bar service, allowing bar owners to maximize their employees' time.”

Since day one, he says that his team’s goal has been to bring the future to life. Bbot has helped them achieve a slice of that through developing a unique way to fix the issue of long wait lines and a hectic staff. Essentially, it saves time for patrons and staff alike.

Patrons can stay on the dance floor longer and sing until their throats are raw with less time spent tapping their fingers at the bar.

“I think people think of the future in these grand terms,” Trevino says in the release. “But sometimes the future is just finding a problem that hasn’t been solved yet and developing a unique way to fix it.”

Be on the lookout for more cocktail slingin’, beer carrying (or hey, maybe even coffee or food) bots at venues and restaurants near you — they’re coming.