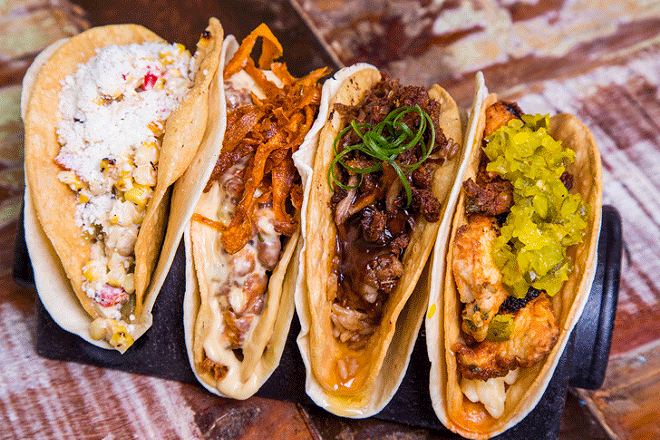 Cold weather might inspire a lot of us to wrap up in four blankets, only letting our hands out into the chill to grab a bowl of soup or stew. But there are actually a lot of great options when it comes to foods to help you warm up. I personally can’t get enough of spicy, flavorful tacos in the winter and I know I’m not alone.

The burgeoning “artisan tacos and cocktails” restaurant concept has brought to the table more than the typical chicken, pork, steak or bean fillings — which are, admittedly, already delicious just as they are. But the best part of a taco feast is that you don’t have to choose just the novel or just the gold standards. Pair one or two of these wild taco combos with your favorite carnitas on a tortilla and experience just how cozy a taco can be.

The Sensei Taco from Agave & Rye

As far as meats that have to travel miles to get to your taco, Agave & Rye might have all others beat with their Sensei taco, which features “soy and ginger kangaroo tenderloin.” Paired with orange rum glaze and spicy peanut chili oil, it is just one of the interesting menu options available. Skip a traditional lobster roll and instead feast on the Agave & Rye Crown Jewel lobster taco, topped with sautéed mushrooms and mac-and-cheese. Agave & Rye’s epic tacos come with a crunchy, hard shell inside of a soft shell, which really levels up the experience: the crisp snap of the taco without the explosion of fillings makes these easier to eat than average. 635 Madison Ave., Covington, agaveandrye.com.

The Huitlacoche Taco from Bakersfield OTR

Bakersfield has been dishing up tacos made with carefully-balanced flavor profiles for a while, keeping the residents of and visitors to Over-the-Rhine happy at their bustling Vine Street eatery. If you haven’t tried their huitlacoche taco before, it’s time you stopped by for something both vegetarian and totally unique. From the corn truffle that forms the central filling of the taco (huitlacoche is a sort of mushroom-like fungus that grows on maize) to the warming poblano, added corn, cotija cheese and the depth imparted by the cilantro, the sum of this taco’s flavors is way more than its parts, all served in a handmade tortilla. 1213 Vine St., Over-the-Rhine, bakersfieldtacos.com. 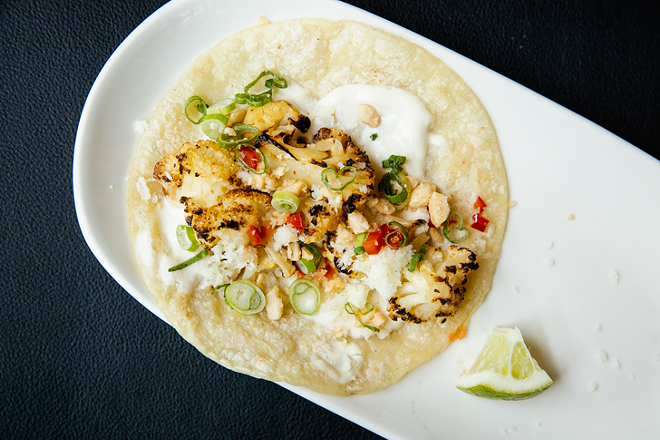 The Caramelized Cauliflower Taco from Nada

Tacos can be a surprisingly fruitful playground for non-meat-eaters, with a variety of vegetables and legumes to combine to make a meal hearty, healthy and fun. While the caramelized cauliflower taco at Nada is not vegan due to a luscious dollop of garlic-whipped goat cheese, the combination of scallion for freshness, fresno pepper for flavor and marcona almond for crunch is unbeatably tasty. Nada does a great job at combining textures that set off your taste buds just as much as the spices and cheese. 600 Walnut St., Downtown, eatdrinknada.com.

The Mantis Taco from Condado Tacos

Condado makes it easy to create your own unique dish with their build-your-own taco concept (and order forms), all of which are served in a brightly-painted interior alongside tasty signature margaritas. While there is a combination to match every flavor preference, among their suggested tacos is the Mantis. The Mantis pairs smoky jackfruit with cheese, onions, mango habañero salsa and a taco shell combo called the Sweet Lucy — a hard corn shell inside of a soft flour shell for maximum sturdiness, with queso and guacamole pre-added like some sort of wonderful taco glue. 195 E. Freedom Way, Downtown; 3329 Vandercar Way, Oakley, condadotacos.com.

The Bulgogi Taco from Drunken Tacos

At Drunken Tacos, the bulgogi (aka Korean-style marinated beef) is ultra-flavorful and cut thinly enough to fit inside of a taco and not make the whole thing fall apart. The restaurant puts all kinds of East Asian flavors to work on their fusion-food menu, proving that a wide variety of cuisines taste great in a tortilla. Be forewarned: The beef may have a delicate sweetness to it, but it is also packs serious spicy heat. You’ll forget about winter’s chill after a couple of these, and there are plenty of more familiar Latin flavors on the menu to complement and maybe even combine as you eat. 200 W. McMillan St., Clifton Heights, facebook.com/ucdrunkentacos.

The Taconey from Jefferson Social

This taco has peak-Cincinnati energy and is served just steps away from Great American Ball Park. Jefferson Social’s Taconey combines many flavors while maintaining the integrity of both a taco and a Cincinnati chili cheese coney. Batting for the taco team is a flour tortilla, pico de gallo, roasted tomato sauce and cream, while the coney aspect is fulfilled with short rib seasoned with Cincinnati-style chili flavors, plus a hot dog and mustard. Together, it’s a meaty, local mouthful that you aren’t likely to soon forget. 101 E. Freedom Way, Downtown, jeffersonsocial.com. The Mushroom and Beet Taco from Mazunte Centro

You’d be hard-pressed to find a more nutrient-dense taco than this one, though other Mazunte flavors — including the roasted zucchini and roasted stuffed pepper tacos — come close. Combining braised greens, roasted beets (full of color and sweetness), mushrooms and salsa, the Hongos y Betabeles taco will fill you up. Ricotta cheese adds a nice richness to the plate. 611 Main St., Downtown, centro.mazuntetacos.com.

My first love at Django is definitely their totchos, a preposterous pile of tater tots swirling with queso, carnitas and crema, but there are definitely other excellent options on the menu. The fried chicken taco combines fried chicken, pimento cheese and chipotle honey and will take your tastebuds south of the Mason-Dixon line. Sure, fried chicken isn’t a staple of the traditional taco-filling scene, but it’ll make you crave a big glass of sweet tea more than a frosty marg. 4172 Hamilton Ave., Northside, djangonorthside.com.