Remember last summer when everybody was drinking cold-brew coffee (including us)? Well, cold brew is now considered somewhat passé. 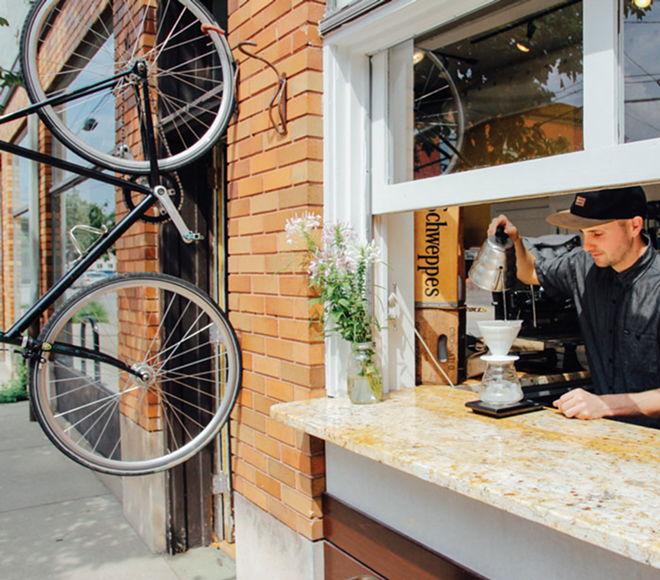 The team at Trailhead Coffee excels at Japanese-method iced coffee.

emember last summer when everybody was drinking cold-brew coffee (including us)? Well, cold brew is now considered somewhat passé. Starbucks has since jumped on the bandwagon, and, honestly, there are better-tasting coffees out there.

Joe Humpert, barista extraordinaire at Trailhead Coffee inside Reser Bicycle in Newport, doesn’t even sell cold brew; the demand for iced coffee in the summer is so high, he says, most coffee shops don’t use quality beans. “Most places that do cold brew will use a less-expensive coffee,” he says, “whereas we’re using a higher quality of coffee here.”

Humpert says you should approach drinking coffee like drinking a craft cocktail — instead of getting a “big plastic cup of whatever,” you really need just one cup of good coffee to get you through the day.

And there’s a science behind the methods to brew a good cup of cold coffee. It has something to do with solubility, volubility and oxidation (chemistry!), which occur at hot temps. If you steep the grounds in cold water (cold-brew method), you’re deadening the flavors.

Coffee snobs aside, Humpert is just one of many coffee scientists in the city who are challenging what coffee can be and crafting iced coffee via a variety of artful preparations.

2015 is the year of Japanese iced coffee. Not all iced coffees are the same. In fact, if you pour hot coffee directly over ice, it’s not going to taste very good. But if you use the pour-over method with a V60 coffee dripper and pour hot coffee into the dripper funnel over a Hario glass filled with ice cubes, the hot coffee will slowly dilute the cubes and create a finish much like iced tea. This is the Japanese method, and it tastes much better than cold brew ever will. Luckily, a few shops in town do this, including Trailhead.

Humpert measures the ice so as to not dilute the coffee (made with Dayton, Ohio, roaster Wood Burl’s beans) too much. “The main takeaway is if you have really good coffee that tastes really good hot and somebody wants it cold, you have to find a way to make it taste as close as possible to that delicious cup of hot coffee,” he says. “With the Japanese method, you’re basically chilling it and diluting it drop by drop.”

In their recently opened Oakley shop, Deeper Roots also uses the Japanese process in their straight-up and nitro (a process that infuses the coffee with nitrogen, similar to a soda fountain) versions of iced coffee. “We brew directly into the kegs for draft service at the coffee bar,” says manager Jon Lewis. “For nitro, the keg is then slightly carbonated and poured through the nitro tap to achieve the Guinness effect.”

And long before Deeper Roots opened in Oakley, they were supplying Cheapside Café with their Japanese nitro coffee (using the same technique). Cheapside itself also does a straight Japanese coffee, but they take it a step further and sometimes add a mixture of local honey, Frisch’s crushed ice and mint to it.

Daniel Noguera of Urbana Cafe, who runs his coffee shop out of the back of a cute Vespa Ape scooter in Findlay Market — and who will soon open a brick-and-mortar in Pendleton — concocts a popular summer Italian drink called a Caffè Shakerato. He pulls a double shot of hot espresso and pours it into a cocktail shaker. He adds a little sugar, ice and mint, shakes it, and the result is a balanced, frothy cocktail-like drink.

Trailhead also does a cold-drip coffee using a Korean contraption called an Alley 600. Coffee grounds and water are placed inside chambers and take up to four hours to slowly drip to the bottom and fill a glass container. The concentrate creates yet another flavor profile. “It has a complexity and a texture not unlike a well-balanced cocktail,” Humpert says. “There’s no alcohol in there, but it registers on your palate like something that is so strong that there should be.”

Carabello Coffee created a coffee blend called Starter to be served at Braxton Brewing Company in Covington. People can stop by the brewery in the morning and enjoy a regular cup of coffee, or they can get cold brew on nitro (just regular ol’ cold brew) all day, if for some reason they don’t want to drink beer.

You can also drink coffee fruit locally. Deeper Roots uses the fruit cherry surrounding the coffee bean to make a drink called a Cascade — cascara fruit coffee and soda mixed together, which gives it a light-pink shade. They also make affogatos, using Aglamesis Bros.’ French vanilla ice cream and their Alchemy espresso, and a cherry cordial drink, which is their iced black coffee paired with a cherry reduction and a dash of half-and-half.