Made with Karrikin's housemade Shuga rum and cola, the new bubbly bev will be available at local retail locations and select bars and restaurants this week. 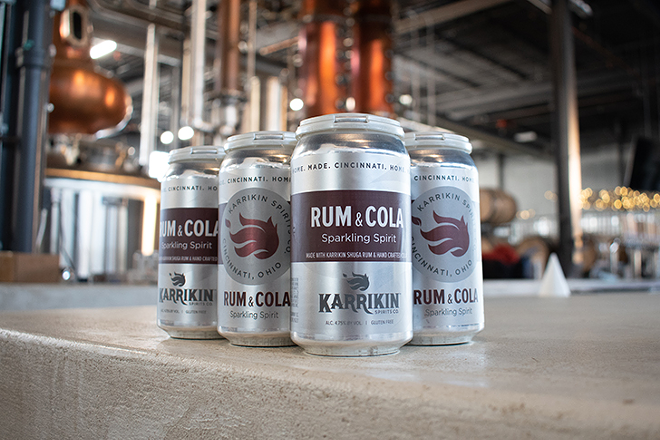 Karrikin Spirits Company has announced a new cocktail-in-a-can addition to their line-up of sparkling bevs.

Rum & Cola will be available at local retail locations and select bars and restaurants starting this week — “the only locally canned Rum & Cola product around here,” suggests Karrikin’s director of marketing Matt Groves.

The drink, as the name would suggest, is made of Karrikin’s cachaca-style white rum Shuga and its housemade cola — a creation that has been “taproom favorite” at the distillery since December 2018. The gluten-free sparkling drink contains 4.75% ABV.

In a press release from Karrikin, the Fairfax-based distillery acknowledged that it faced difficult challenges in 2020. Last month, Karrikin closed its distillery’s restaurant operation The Hearth until further notice, following a tough time adjusting to food operations during the ongoing COVID-19 pandemic. The restaurant featured Karrikin’s wide variety of draft beers, house cocktails and homemade non-alcoholic sodas in addition to complimentary food items such as scallops, butternut squash spaetzle and a cheeseboard.

In the announcement of the restaurant's indefinite closure, Karrikin had promised "fun projects coming out of our distillery soon to help keep your spirits lifted through the winter."

With its most recently rummy release, it seems that some of these hinted projects are coming into fruition.