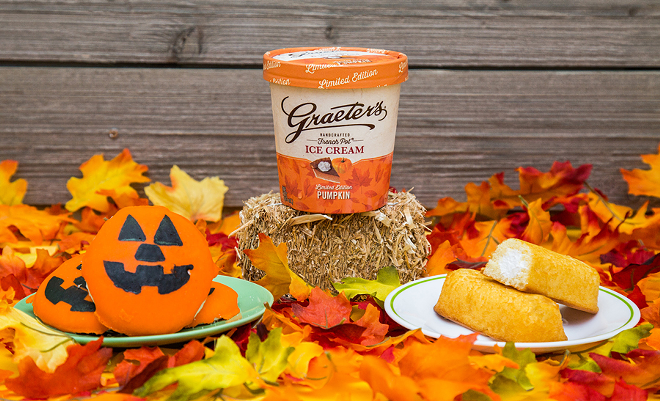 Not everyone can afford a Starbucks Pumpkin Spice Latte. A tall PSL is $4.25 before tax, which is almost as much as I pay for 11 ounces of Folgers Medium Classic Roast. And I know — the PSL is a treat. As the air outside begins to chill and my sinuses battle Cincinnati’s humidity frosting over, the yoga-pants-wearing college girl inside me cries for the sweet release of pumpkin spice. But as my heart cries, “Treat yo’ self!,” my wallet screams, “Check yourself before you wreck yourself.”

So what’s a broke girl to do? Making myself a pumpkin pie is too much work to wrap my mind around. Luckily, Hostess and United Dairy Farmers have my back.

A box of 10 Hostess Pumpkin Spice Twinkies is only $2.50, and I actually nabbed a bottle of the Starbucks Pumpkin Spice Frappuccino for only $2.99 from my local UDF fridge. This densely caloric pumpkin spice experience cost almost as much as one latte. This felt like a win until I had actually put these pumpkin products into my body.

I arranged my Hostess Pumpkin Spice Twinkie and Pumpkin Spice Frappuccino bottle aesthetically and quickly snapped away for the Instagram. People on the internet had to know what I was consuming! And that I, too, am excited for autumn!

After making sure that at least 200 people had seen my Instagram story, I decided to try the Twinkie. The outside was the regular golden yellow cake we all know and love. I broke it in two, and it separated easily, grease coating my fingers. I ignored this. I shouldn’t have. This was a red flag in the form of neon-yellow snack cake.

The inside filling was a light brown and tasted mostly like cinnamon. Or, more specifically, Cinnamon Toast Crunch. As the first pumpkin spice-flavored food of this year for me, I felt a wave of nostalgia. I remembered carving pumpkins as a kid, my mom letting me use a tiny handheld electric saw to cut unrecognizable faces in gourds. I thought of dressing up like Princess Zelda, even though no other girl my age had any idea who I was.

My dreamy nostalgia was cut short by the aftertaste of the Twinkie; there was suddenly an almost-caramel flavor that caught me off guard. Now I am all for caramel in the fall, but I am a pumpkin spice purist. The crossing of the autumn flavors, not at all advertised on the box, alarmed my palate. It was as if Hostess decided to just dump all of the autumn-themed flavor chemicals into the whipped Twinkie filling and call it a day. After tasting the caramel, the entire experience came crashing down and I realized I was eating a Twinkie. I grabbed my phone and deleted all evidence of it off of my Instagram story.

I had hope that the bottled Pumpkin Spice Frappuccino would be superior. Long story short, it wasn’t. Long story long, I am not sure why I even buy bottled Starbucks drinks. They seem like a good idea when I’m standing at UDF at 8 a.m. trying to decide which caffeine coffee beverage to put into my trash body that day. Besides Pumpkin Spice, there are flavors like vanilla, mocha, s’mores and Mexican mocha. Variety is the pumpkin spice of life, right?

Now don’t get me wrong: The flavor was there. The layers of pumpkin spice, the sweet milk, the color. Starbucks is the ruler of the pumpkin spice world, and there would be public outcry if they failed to deliver the experience they’ve turned into a global spice phenomenon. Their bottled beverages are always just too sweet and taste like metal. Which is strange, as they’re sold in glass. And translating the Pumpkin Spice Latte — made to be gripped in mittened hands on a chilly October day — to a cold beverage sold out of UDF’s fridge… well, it wasn’t quite the same. The lack of espresso, which tempers the actual Pumpkin Spice Latte’s sweetness, left the bottled PSL tasting like drinking sugary milk.

While I saved a bit of money in the long run, I should have just ponied up and got a Pumpkin Spice Latte at Starbucks. Or better yet, stopped by a local coffee shop like Coffee Emporium and grabbed their more natural version of the treat: the Pumpkin Pie Latte. It’ll be a while before I hop back onto the pumpkin spice horse though. I might wait until it’s actually cold outside.

Graeter’s — Their limited-edition Pumpkin ice cream is in the grocer’s freezer. Aimed to capture the “essence of autumn,” the ice cream is made with pumpkin pie filling and seasonal spices, including cinnamon, nutmeg, ginger and cloves — “Just like grandma’s pumpkin pie,” reads the label.