The restaurant, known for its fresh, California-style cuisine, will be shutting its doors at the end of the year. 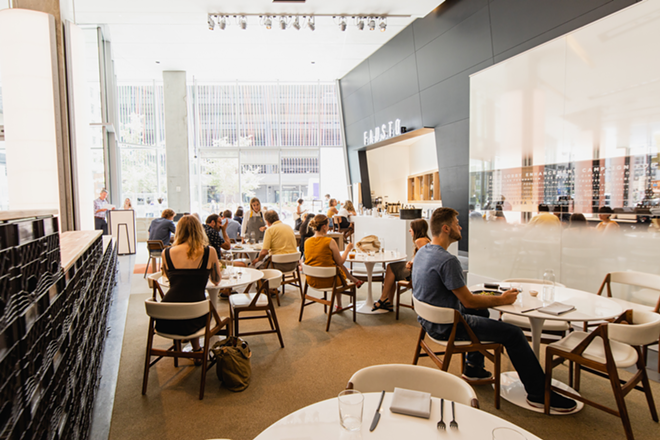 Fausto at the CAC, the restaurant inside the Contemporary Arts Center in downtown Cincinnati, will permanently close at the end of the year, according to a farewell letter from owners the Ferrari Bros.

Ferrari Bros., the restaurant group made up of brothers Tony and Austin Ferrari, opened Fausto in the summer of 2019. The restaurant is known for its contemporary, California-style cuisine featuring fresh, locally sourced, in-season ingredients.

The Ferraris state in the letter that the COVID-19 pandemic created struggles for the restaurant they couldn't recover from, especially with staffing.

"Staffing has to be one of the hardest things any restauranteur is dealing with right now. What do you do when your dishwasher and cook don’t show up? Well, I guess you roll your sleeves up and do it yourself," the letter reads. "But, folks say if you pay more you could have more staff. That is very true, and as much as we want to pay more, that means menu prices rise. But the public doesn’t like to pay more for the food? Because they can go to Skyline and get something much cheaper, and quicker. So where does the money come from to pay for the staff? We could do circles trying to figure that one out."

The Ferrari Bros. say staffing troubles also meant they never reopened for dinner after the pandemic shut down Fausto and that it was just too difficult and expensive to make it work.

"Dinner was a big part of our business. It is where we sold alcohol ... and it allowed us to make more money than lunch," the letter reads. "In the restaurant business, you have to sell booze, and if you don’t, well, you are missing out on a major margin."

The group also says complaints of things beyond their control — such as the lighting and restaurant entrance — and trying to get diners to come back downtown also played a role in the decision to close. They also cite an unwillingness to "dumb down" their menu.

"We are not willing to sacrifice why we were here in the first place, we are not going to serve commodity products, we are not going to start selling hamburgers and fries, tacos and beyond," the letter continues. "This world is so full of garbage food, and it is sad to see it get eaten. ... We could go for days on this topic, but the truth is, the city is not ready for such change. It will take a while to wipe out the fast food and replace it with delicious food that was delivered by a farmer and cooked by a proper chef. Food that was grown with real dirt, real sun, real water and nothing else."

“We’re sad to see them go,” Chief Deputy Director and Interim Executive Director of the CAC Marcus Margerum said in a press release. “But this space has a long history of providing a platform for new ventures and supporting them until they start another chapter. We’re glad the Ferrari Bros. will remain a Cincinnati brand and plan to keep them in our family. At the same time, we’re optimistic about discovering what’s next for this space.”

The Ferrari Bros. concluded the letter by writing, "In the end, we can say we made it three very beautiful, and crazy years. We hope you all also remember Fausto for what it served, for its ethos, and why it was here to begin with. We love you Cincinnati, and we love all of you that have supported us. We know who you are, and we thank you from the bottom of our hearts."

The Ferrari Bros. say they will continue operating their Mom ’n ‘em coffee shops in Camp Washington and Madisonville.

Fausto's final day will be Dec. 22. Until then, it will be open 10:30 a.m.-2:30 p.m. Monday through Friday. You can make reservations for its final dinner by emailing [email protected].