50 Ways To Love Your Growler 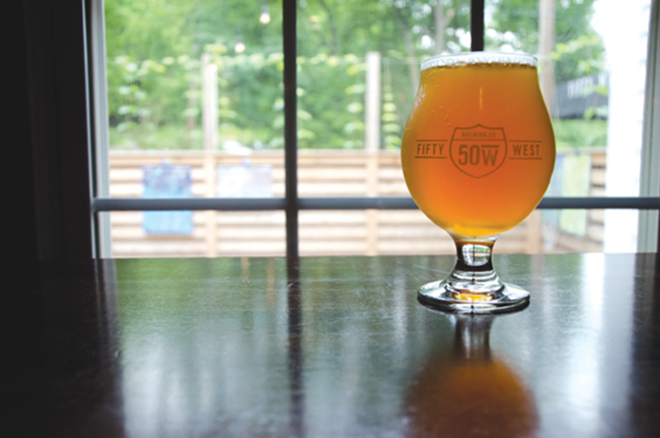 ou ever have those moments where you just get really excited in life and you can’t sleep?” asks Bobby Slattery, co-owner of Fifty West Brewing Company. Slattery was restless and pumped full of adrenaline over his new craft beer business. A vision had popped into his head in the wee hours of the morning that would coalesce into the company mascot, “Penny Lane,” a bright orange ’79 VW Bus named after the traveling “Band-aid” groupie from the film Almost Famous.

“Blake and Whit get this random email at like 3:45 in the morning,” Slattery says. “‘Seventies orange Volkswagen bus with our logo on it — this is what we need.’ And so I sent them the email thinking they’d just write back, ‘Ha-ha-ha, funny.’ And they write back, ‘BUY IT.’ ”

Hesser and brother-in-law Horsburgh, a seasoned, Siebel Institute-certified brewer, had first pitched to Slattery their ambitious plan for a local microbrewery, steeped in Horsburgh’s thoughtful, four-virtue philosophy of tradition, innovation, craftsmanship and patience. Impressed with their professionalism and step-by-step, hoppy road map, Slattery was sold.

“Craft beer’s a big deal and the other thing that everybody’s talking about is local,” Slattery says. “Chris Goodin, who is over at Arthur’s, was one of the first people in this city (to turn) all his tap handles over to local. I remember when he did it. It’s gutsy, but I thought he was on to something.”

But before they could start their own local beer empire, the trio wanted to make sure their brew was as good as they thought it was. After getting an enthusiastic thumbs up from several key area beer experts like Jay Ashmore, owner of Dutch’s Larder, the three set out on establishing a name for their fledgling microbrewery. Seeking inspiration, they called on the ghosts of their 185-year-old home base — the former Heritage Restaurant in Mariemont — and the new journey they’d take together on a road so integral to their lives, Route 50.

What they found were old Prohibition-era photos of famous Cincinnati bootlegger George Remus delivering alcohol to the Kelly family, who’d operated their building as a speakeasy called Kelly’s Roadhouse. Other stories began to pour in, from an old grandmother who remembered Terrace Park down the street as John Robinson’s Circus, where it was said exotic animals had roamed freely, to a dusty road-tripper who recalled his trek through “The Loneliest Road in America,” a particularly remote stretch of highway cutting through Nevada.

The stories were all bound together by one common theme: U.S. Route 50, the cross-country highway only feet from their brewery’s door. Looking off into the sunset, the direction where people travel to fulfill dreams and build a future, the three brewers experienced an epiphany, and the name Fifty West was born.

Armed with a new name, renovated building, tap room and dining area, the three soon secured Chef John Tomain, whose beer pairing background helped him design a rotating, seasonal small plate menu that deftly marries Fifty West’s lineup of more than a dozen brews. A six-beer flight is available for only $5 and each beer on the list comes with suggested food pairings.

Dishes like the banh mi chicken, sweet potato bisque and smoked salmon guacamole complement Fifty West’s Punch You in the EyePA, an intensely hopped, citrusy brew that has fast become one of the brewery’s most sought-after beers. The 50w Radler, a traditional German summer concoction of light ale and a house made lemon-lime soda, is a perfect thirst quencher for the summer months.

Although Fifty West does not yet have the capacity to distribute its beer to area bars and restaurants (a sizable waiting list patiently anticipates their coming production upgrade), the brewery offers 64-ounce growlers for $15, which can be returned and refilled for $10.

“People are starting to understand growlers and how they work,” Slattery says. “We predicted we’d sell like 10 a month. Now we’re moving about 100 a week.”

With their trusty mascot Penny Lane parked outside, Fifty West Brewing Company is poised to become one of the most influential microbreweries in Cincinnati, honoring the city’s brewing past while laying a foundation for the area’s revival as an important hub of beer innovation.